Lars von Trier Questioned by Police; Swears Off All Interviews and Public Statements 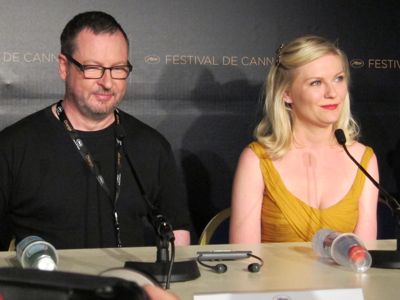 It’s come to this. Lars von Trier has declared that he will no longer do interviews or release public statements from this day forward.

The reason? According to the director, he was questioned by police in Denmark about charges brought against him in France after his now-infamous Nazi comments at the “Melancholia” press conference in Cannes.

Here’s von Trier’s reasoning in his own words:

Today at 2 pm I was questioned by the Police of North Zealand in connection with charges made by the prosecution of Grasse in France from August 2011 regarding a possible violation of prohibition in French law against justification of war crimes. The investigation covers comments made during the press conference in Cannes in May 2011. Due to these serious accusations I have realized that I do not possess the skills to express myself unequivocally and I have therefore decided from this day forth to refrain from all public statements and interviews.

If von Trier indeed sticks to this statement, it marks a sad end to the Cannes debacle, where he was declared Persona Non Grata by the event’s Board of Directors.

So we leave you with this, von Trier’s last interview with iW published shortly after he made the damaging comments.

“I was extremely stupid, but on the other hand we should worry about not being able to talk about certain things,” he said to iW. “At the press conference, I was in a good mood. It that room, with so many people and TV cameras, it was like a big blank audience; I was talking to the world.” For more go here.

This Article is related to: News and tagged Melancholia