David Weissman Talks About His Harrowing AIDS Doc "We Were Here," Our VOD Pick of the Week 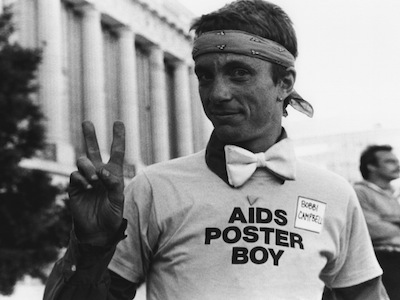 In his powerful documentary “We Were Here,” filmmaker David Weissman (“The Cockettes”) chronicles the arrival of AIDS in San Francisco and its subsequent aftermath through the eyes of five individuals who were witnesses to history. It world premiered at Sundance earlier this year (where IW’s Peter Knegt proclaimed it to be “one of the standout films at the festival”) and hits VOD this Friday, Dec. 9. It’s our pick of the week.

Weissman caught up with Indiewire to discuss his personal connection to the documentary and the impact it’s had on the San Francisco community and abroad.

So you moved to San Francisco in 1976. What were your first impressions of the city?

I was in Venice Beach in the mid ‘70s, which was a wonderful place to be in those years, but it was changing. I hadn’t entirely found my circle. In San Francisco, I realized when I got there that there was this incredible community of politically active, longhaired, free spirited faggots like me. It was just thrilling to find a home.

Your film only has five subjects, which is pretty notable given the scope of what you’re tackling.

At the beginning I didn’t really know how I was going to approach this, because it is such an epic history with such emotional resonance for so many people. It was daunting. The first interview I did was with Ed, someone I had worked with in the ‘90s with prevention stuff. So Ed was really my first experimental interview. Very quickly into that interview, I realized that what would work [best] for the film I wanted to make was to really go for the depth of the individual human experience.

How did you go about finding the other four?

Other than Ed, they were all people I bumped into somewhere. In the course of a random conversation it occurred to me that they would be interesting to interview. It’s shocking to me to even say that, because they did work out so well. I only did a total of nine interviews.

How did you choose who to feature and who to cut?

I knew at the end of the interview who to include. The intuition around this was very strong from the beginning. When I interviewed people, I would start off by saying, “This next three hours is all about you. As soon as we’re done it’s all about the movie.” I think everybody got that, because they all have to work as a group to evoke as a bigger picture.

How did you get your subjects to be so remarkably candid?

I think part of what I sensed in choosing them was their openness. Not just openness, but an appreciation of what the interview experience would be like for them, as a cathartic experience. Everyone was very generous in his or her emotional availability.

Now you’re not featured in the film, but you went through this time in history with them. What was it like going back for you?

It’s really an on going process; it has not stopped in any way. Even subsequent to completing it, I’m still completely immersed in that history which was a very painful and complicated time of my life. So it’s been challenging emotionally, but it’s also been very empowering to feel strong enough to revisit that period. It continues to be a very rich and intense experience.

When did the film have its own homecoming in San Francisco?

It had its theatrical premiere at the Castro Theater in February of this year after Sundance. And that was extraordinary. It ran for a week there to huge crowds of a very diverse age range. It generated just an enormous amount of rippling conversational throughout the city that hasn’t really subsided.

I really wanted the movie to have its theatrical premiere here. It was deeply gratifying to me to have it deeply impact that community. But there has not been a single screening anywhere that I’ve been to that has not offered some profound experience. It’s just been remarkable.

This year more than most, we seem to be getting a lot of work, both in theater and film, that reflect back on the epidemic.

You know when I started this; it didn’t even occur to me that we were coming up on the 30th anniversary of the disease being noticed. So I think that it’s just sort of a historical zeitgeist. Lots of younger men are doing creative work looking back at the experience and how it’s impacted their life now. I think enough time needed to pass for those of us who lived through it to really catch our breath. And I think that younger generations are just sort of realizing that, yes they know they are supposed to use condoms, but they really don’t know much about what did happen, how we did get to where we are today.

I think in many ways it’s an inspiring history. One of the things that I think the film does, is that in the five people you see on screen, you know that these are [individuals] who lived through this unbelievably challenging, traumatic time and have emerged from it as these beautiful, generous and wise souls. I hope that the movie is inspiring around issues of community, around issues of sexual responsibility [and] around compassion. There are so many things that are specific and yet universal in this film. Again, I hope it inspires people in ways that will benefit them.

This Article is related to: Features and tagged DVD and VOD, Interviews, New On VOD, We Were Here