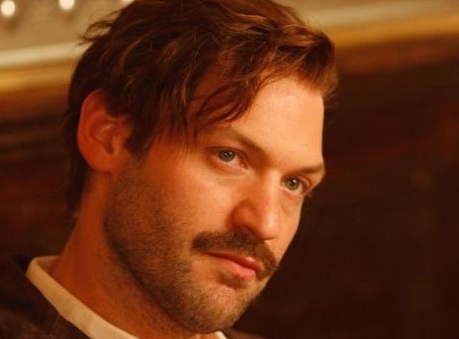 Why He’s On Our Radar: At 35, Corey Stoll is already a cemented celeb in theater and TV worlds, best known for his Drama Desk Award nominated turn alongside Viola Davis in “Intimate Apparel” and playing detective “TJ” Jaruszalski on NBC’s “Law & Order: LA.” He’s appeared in several films, including “North Country” and “Salt,” but broke out on screen in a big way this year as Ernest Hemingway in Woody Allen’s hit “Midnight in Paris.” On Monday, Stoll received an Independent Spirit Award nomination for Best Supporting Male for his work as the temperamental, famed author.

Congratulations on your Spirit nomination the other day.

Thank you, thank you so much.

Were you surprised? Where did you get the news?

You know, I didn’t know when these were being announced so I was just sort of nursing my hangover from the Gothams and got a call from my manager. So it was a nice hair of the dog.

So this whole year’s been a bit insane for you. How did it all start? How did you get discovered by Woody?

I was doing “A View from the Bridge” on Broadway with Scarlett Johansson. So he came and saw the show, I assume for her. He came once and didn’t come backstage. And I was very disappointed because he was one of my childhood heroes. My senior quote in my yearbook was a Woody Allen quote, which was actually horribly mangled by the yearbook staff somehow. It was supposed to be “Eternal nothingness is OK as long as you know how to dress for it.” And they just printed it as “Eternal ‘huffingness’ is OK” without the punch line. So everybody’s like Corey is very strange. I mean the quote was a little strange to begin with… Anyway, I was disappointed that he didn’t come back. Then a few weeks later we were taking our curtain call – and that’s really the only time you can see who’s in the audience. And he was in the third row. He’d come again. And the next day I got a call that I had a meeting.

So have you ever thanked Scarlett for essentially putting you in touch with Woody?

Yes, yes absolutely. I actually got the role while we were still doing the play. So yeah, I did. I asked her, cause I didn’t have any idea what the part was, what the movie was. So I was trying to get as much information from her as possible. So she said, “All I can tell you is he’s really macho.” So I wore my cowboy boots.

Did she give you any pointers on what to expect once you actually got the part?

No, not really. I think she was a little bummed that there wasn’t a part for her. It was really interesting watching that documentary on Woody on PBS last week. Just seeing how consistent he is with the way he works with actors. You hear the same stories over and over again about how he’s as present as you want him to be [because] there are actors who want to go in and do their thing and get out and he’s happy to accommodate that. And for those actors who are a little bit more needy of attention, he can be there for them too.

So you just said that you initially weren’t told what he was interested in seeing you for. When did you first hear that he had you in mind for Ernest Hemingway?

I showed up at his screening room, editing room, and we talked for a couple of minutes about the play, and he said I’d like you to read something. And of course it was this crazy kerfuffle with his assistants trying to find some material for me to read and then he finally gave me this two-page monologue basically and it said “Hemingway.” I didn’t know, is it E. Hemingway? Is this a period piece? Is it like ‘Play it Again Sam’ where it’s like an imaginary companion to the protagonist? And he said just read it like Hemingway. I was like, when is the last time I read a Hemingway book? But it was all in the writing. So I was given five, ten minutes to look it over and I read for him and then he gave me a little adjustment and I did it again and that was it. It was very easy and very not weird like I’ve heard a lot of auditions with him can be.

I can imagine that’s a little bit daunting. I mean walking in and meeting one of your icons for the first time and then also being handed a script and you’re told to speak as Ernest Hemingway. What ran through your head during the audition?

It was a rush. For some people they need to jump out of airplanes or join a fight club – that big sort of crazy adrenaline rush. It was so exciting. I’ve been in very exciting moments too where I’ve flopped and my nerves have taken over, and for some reason in that moment they didn’t. And luckily I didn’t blow it.

Were you a big fan of Hemingway, the way you were of Woody prior to reading the scene?

Not as much. I’ve always counted “Annie Hall” as one of my favorite movies of all time, but I definitely really liked Hemingway. I had a sort of Hemingway phase and a Vonnegut phase. I sort of went through all those phases and I hadn’t gone back to him since high school or college. Then I got to after I got this role. It was such an opportunity to dive in. As an actor, I rarely find the time to really focus and read for pleasure because there’s always something distracting you. Here you have to read this script, here you have to memorize this or that. This was a great opportunity where I had months to read. It was great. I really grew to love Hemingway.

Was it less daunting when you were given the full script because it’s not a biopic by any stretch of the imagination. Woody takes such lovely flights of fancy with these revered historical figures.

Well I was never given the full script. I had a basic idea of what was happening by the time I started shooting. Owen [Wilson] was the only person who got the whole script.

So you knew that he was from the present…

Yeah, I gleaned that only because… I mean you get a sense of it from his reactions, the fact that he’s so astounded to meet Hemingway. But I was only given my scenes. I wasn’t even given them at first. The day after I got the part, I was invited to come to his editing room again and read the sides. And there was a little bleed over from a previous scene and a reference to a Tea Party Republican or something. So I knew that part of it at least took place in the present. It’s interesting. When I auditioned I assumed it was just the one scene. I thought it was just these fantasies of this character. So when I actually got to read all of my scenes I was like, ‘oh there’s actually quite a bit here.’ So I think I prepared for it as if I were doing a ten-hour mini-series. I don’t know what I would have done to prepare more. I was really into it.

And how did you develop his signature voice?

I read [Hemingway’s work] out loud all the time. It’s so much fun to speak. I’d read out loud to my girlfriend. So I think the idea was to let the text lead me and then fortunately Woody wrote such a spot-on Hemingway, that all I had to do was get out of the way and say the words. It’s not an accurate Hemingway. That’s not the way he spoke. He had a more lyrical voice than that. Just the little bit I’ve heard he doesn’t sound uber-masculine. That staccato thing…

That you brought to the performance. Now you’re a native New Yorker. What was it like landing your first Woody Allen part and actually having to go to Paris to shoot?

It was sort of like being a New Yorker and getting a part on “Law and Order” and having to go to L.A. to do it.

I mean, it was wonderful. There’s something really great about being on location. There’s a sort of focus you can give. You’re outside of your regular life. You’re interacting with your fellow actors and the cast and the crew more extracurricularly. And on top of that, the fact that we’re in Paris – it was such a delight. I wished it had been a much longer shoot.

Was the shooting of the film as magical as the film itself?

It’s an indie film. I think it looks beautiful. Sonia Grande did the costumes and did an incredible job of making it look really lush. She’s got three periods she’s doing. But when we were shooting it, for the most part it was incredibly fast and un-air conditioned and stuffy. And the trailers were always very far from set. It was independent filmmaking, so it wasn’t luxurious. But it was magical.

What do you have next? I know you wrapped shooting on the latest “Bourne Identity” movie.

Figured. What else do you have in the works?

I just finished this movie with Samantha Morton called “Decoding Annie Parker” about the discovery of the genetic link in breast cancer. It was so great to work with her. We talked about her experience with Woody. She was like 21 or something when she worked with him.

Did you two have a similar experience?

It was different. In terms of the relationship with the director, she had never seen a Woody movie before she was cast. She didn’t really know what she was getting into.