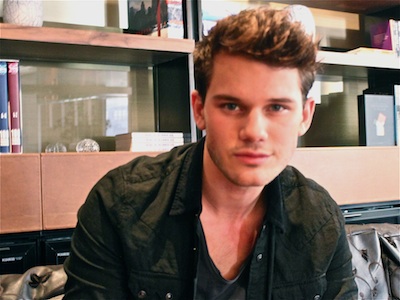 Why He’s On Our Radar: Plucked from obscurity, Jeremy Irvine is now set for stardom thanks to some director named Steven Spielberg. With “War Horse,” the good looking Irvine joins the likes of Drew Barrymore and Christian Bale, two actors who launched their careers by appearing in Spielberg films. In the legendary director’s wartime family epic, Irvine stars as Albert Narracott, a boy who develops a special bond with a thoroughbred named Joey that stands the challenging test of World War I. In a cast filled with luminaries (Emily Watson and Peter Mullan star as his parents), Irvine more than holds his own.

What’s Next: Having Spielberg on his resume obviously helped the young soon-to-be star. Next year, he’ll be appreading in “Great Expectations” opposite Ralph Fiennes and Helena Bonham Carter and the heartfelt drama “Now Is Good” starring Dakota Fanning. Irvine is soon to start work on “The Railway Man,” a true story, set to star Colin Firth and Rachel Weisz.

Take me back to your life pre Spielberg…

There was a lot of walking around London putting CVs through agents’ mailboxes, doing crappy jobs and not having much work at all. You know, I spent so much time out of work that I started trying to do other things on the side just to keep busy. I was in a theater show with no lines. My friends would take the nick out of me before I took the job saying, “You’re just going to play a tree or whatever.” In the end, I was playing a tree (laughs). My first scene, I came on with two branches and I stood there.

Then I signed on with an agent, and “War Horse” was the second audition they sent me out on.

How does one audition for Spielberg?

Well, you do a reading with a casting director on camera. They send it to some other people and then if they like it they send it to Spielberg. I wasn’t even getting callbacks on commercials and then to my astonishment I got a callback on a movie. As far as I was concerned, this was just good audition experience. This kind of went on for six weeks, doing readings with horses and the like. During that time, I was learning how to ride and hanging out with horses. About six weeks later I get a call saying, “Can you meet Steven Spielberg tomorrow for tea?” I was terrified; I don’t think I slept much that night.

It’s funny, within five minutes of being in the room with the guy you’re completely at ease, just having a chat like you and I. He’s just a very genuine, paternal kind of guy. That’s kind of his greatest asset as a director. He makes you feel very comfortable, so you’re never afraid to make mistakes.

Spielberg joked at the press conference that part of the reason why he cast you is because you’re good with horses.

You know, that’s so funny because I never had anything to do with horses. I think most actors will tell you the same thing; when you’re not working you put 100 percent into every audition. I really tried to get good with horses as quickly as I could. I had to convince that casting director.

I remember one scene I was doing a scene with a horse, a big emotional scene. Halfway through the audition, the horse stamps on my foot. I was so desperate not to show them I was in pain. The tears were real (laughs).

That was just the audition. How many injuries did you suffer on set?

You know what? Once I got the movie, I had two months of training with the best horse whisperers and stunt people in the world. By the end of it, me and the rest of the cast were pretty competent. You really build these relationships.

Did you ever step back during the making of “War Horse” and just pinch yourself? 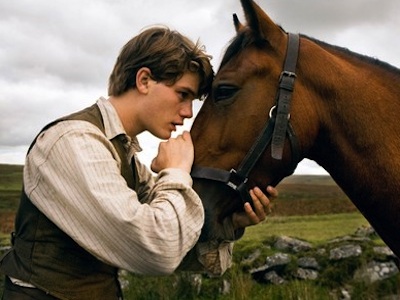 I had to stop myself from doing that. You’re there to do a job. Tom Hiddleston sat me down and said, “Look. At the end of the day it’s a job. At the end of the day it’s like any other job. You turn up, you do the best job while you can while you’re there and then you go home.” When you’re at home you can freak out. There was so much that I had to focus on. I had to learn how to act for screen for the first time. There was so much I had to come to grips with, that I put the rest of it to the back of my mind.

The film harks back to another era of filmmaking; it’s unabashedly sentimental.  You really have to surrender to it in order to go along for the ride.

I remember watching this and going, “God, it this was a movie when I watched while I was a kid, I would watch it again and again.” It’s episodic; it goes from story to story. It’s shot in that wonderful old fashioned, best possible way. It’s on a such an epic scale that I don’t think anyone but Steven Spielberg could pull it off. It’s incredibly ambitious.

What’s your own personal film taste like? Is “War Horse” something you’d seek out on your own?

It’s difficult to choose one genre of film. Just when you think you’ve found one genre you like, something different blows you away. I don’t know…I love dark comedy (laughs). I love sick humor. There’s not a lot of that in “War Horse.” One of my favorite movies is “In Bruges.” I get such a kick out of movies like that.

So where do you live day to day?

Do you recall when you first saw your face plastered all over subway stations and the like? You’re all over New York.

I know! It’s not happened in London yet. There are no posters up yet. It just makes me feel like a very long way from home.

You said your friends made fun of you in your theater days. What do they make of you now?

Oh, right Jesus. So I didn’t tell them I was doing the movie. I thought it’d sound funny. I waited until the press came out. On set the food was amazing and I went nuts. Coming from theater where if they’re offering you free food, you stock up for a week, I went crazy. I put on a stone in three months and that’s a lot (laughs). So the press came out on that and I get texts from my friends saying, “Jeremy, did you eat the bloody horse?” That’s kind of their attitude and that’s the way I like it. There’s something very British about that.