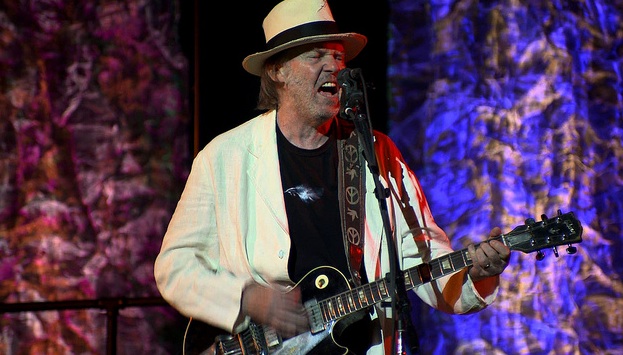 The Slamdance Film Festival announced a long list of special screenings and short films that will play at its 2012 edition.  Included in the mix is Jonathan Demme’s “Neil Young Journeys,” a portrait of the rock star at his 2011 summer solo shows in Toronto.  The festival will also screen a never-before-seen TV pilot from Ed Wood as part of their program.

The Slamdance Film Festival will run from January 20-26 in Park City, Utah.

The complete list of films announced today is below.  For the competition slate for this year’s Slamdance, check out the earlier announced list.

Old Dog – Director/Screenwriter: Pema Tseden. (China)
US Premiere
On the high Tibetan plains, an old shepherd will do anything to prevent his Tibetan Mastiff from being sold to an urban Chinese dealer.
Cast: Yanbum Gyal, Drolma Kyab, Lochey, Tamdrin Tso

Neil Young Journeys – Director: Jonathan Demme. (USA)
US Premiere
A personal, retrospective look into the heart and soul of iconoclast Neil Young – astold through intimate performances from Young’s 2011 summer solo shows in Toronto’s iconic Massey Hall, and insightful, wistful stories from his life while driving from his idyllic Canadian hometown.

No Room for Rockstars – Director: Parris Patton. (USA)
World Premiere
Through the experiences of four musicians on The Vans Warped Tour, No Room For Rockstars takes you on an emotional journey of hope and determination, and documents the extremehighs and lows that occur in the pursuit of success in today’s era of rock and roll.

Terra Blight – Director: Isaac Brown. (USA)
World Premiere
A global examination of the unseen life cycle of computer consumption, from manufacturing todisposal, that has created one of the largest, most common toxic wastes on our planet.

Wild in the Streets – Director: Peter Baxter, Screenwriters: Peter Baxter, Jay Nelson. (UK/USA)
World Premiere
Every year, thousands of locals from rival sides of a rugged English town brutally compete in an ancient sports game that is the lifeblood of the community – and the origin of soccer, rugby, and football.
Narrator: Sean Bean

Franchi is Back – Director/Screenwriter: Alexandre Franchi. (Canada)
World Premiere
A Filmmaker talks about his bout with cancer in a self-promo film in order to avoid repeating his damn story 1000 times to people because it’s a pain in the ass.
Cast: Alexandre Franchi

Dances With The Armchair – Director/Writer: Dariush Nehdaran. (Iran)
US Premiere
As an armchair burns down to the ground, all the faces and memories embedded inside it dance away from its body through the flames.

Far From Him, Towards Him – Director/Screenwriter: Javad Rezaei Monfared. (Iran)
WorldPremiere
An atheist with a terminal disease goes on a journey to find and reconnect with his father whom he believes is a servant in a holy shrine.

Pondering – Director/Screenwriter: Mohammad Hossein Keshavarz Motlagh Shirazi (Iran)
World Premiere
On a crisp night, under the blue moonlight, a man explores his inner child as he strangely interacts with the streetlights hovering above him.

A Pore As Big As a Knuckle – Director/Screenwriter: Ali Ahmadi. (Iran)
World Premiere
A story about a family that has to face the consequences of a painfully unusual rape incident committed by one of their own.

The Tree – Director/Screenwriter: Hamed Siami. (Iran)
World Premiere
A studio photographer loses the ability to associate people with their pictures.

When The Kid Was a Kid – Director/Screenwriter: Anahita Ghazvinizadeh. (Iran)
World Premiere
A ten-year-old girl strives to understand her divorced mother’s world, while preparing for a play in which children imitate their parents.

At The Formal – Director/Screenwriter: Andrew Kavanagh. (Australia).
US Premiere
Modern and ancient rituals collide in this macabre depiction of a high school formal.

The Dude – Director: Jeff Feuerzeig. (USA)
Documentary
As the inspiration for the beloved central character in the Coen Brothers’ cult-favorite film TheBig Lebowski, Jeff Dowd has become a popular figure at Lebowski Fests around the country.

The Fritzl Effect – Director/Screenwriter: Stefanos Sitaras. (Greece)
A musician keeps a young woman in his basement for inspiration. As she tries to escape, she only falls deeper into his trap.

I Saw Your Sister Yesterday – Director: Mina Park. (USA)
Experimental animation about a woman’s inner pain due to societal restrictions.

The Magic Man – Director/Screenwriter: DC Kasundra. (USA)
Hoping to secure fame and fortune, a struggling vaudeville magician turns to the dark arts, but the power unleashed could cost him the one thing he truly loves.

The Severe Psychosis of a Musicless Man – Director: Ian McClerin, Screenwriter: Matt Gomez. (USA)
World Premiere.
A cartoonish journey into the mundane life of Preston: a middle-aged family man who begins hearing music in his head, fusing with his eccentric family, that plummets him into insanity.

Stokje – Director/Screenwriter: Léonie de Boer. (Netherlands)
A tale of two boys at the playground, and their descent from child’s play to immorality.

33 Teeth – Director/Screenwriter: Evan Roberts. (USA)
A 14 year-old boy has a heightened fascination with the comb of his attractive neighbor, Chad.

The Agony and Sweat of the Human Spirit – Directors/Screenwriters: D. Jesse Damazo, JoeBookman (USA)
Two cowboys on a hunt. What are they hunting? Triumph.

The Centrifuge Brain Project – Director/Screenwriter: Till Nowak. (Germany)
Portrait of a group of American scientists who in the 1970s conducted bizarre experiments involving amusement park rides.

Eat – Director/Screenwriter: Janicza Bravo. (USA)
After locking herself out of her apartment, a young woman finds herself in the company of a reluctant neighbor.

The Good Person – Director: Yukihiro Katô. (Japan)
US Premiere
A housewife with a missing husband has a bizarre encounter with mysterious visitors.

I Am John Wayne – Director/Screenwriter: Christina Choe. (USA)
World Premiere
A young black cowboy struggles with the death of his best friend.

The Kook – Directors/Screenwriters: Nat Livingston Johnson, Gregory Mitnick. (USA)
A gentle and unassuming member of an eccentric religious sect in the Catskill Mountains experiences a crisis in faith.

Lin – Director/Screenwriter: Piers Thompson. (UK/Bulgaria/Turkey)
A woman appears to be running away from her past.

Little Horses – Director/Screenwriter: Levi Abrino. (USA)
A divorced small town postal worker tries to use a pony to win his family back.

Memory by Design – Director/Screenwriter: Nathan Punwar. (USA)
The objects that three young women use to mark their past take on memories of their own.

People Parade – Director: John Wilson, Screenwriters: John Wilson, Chris Maggio. (USA)
World Premiere
After the star of a long-running variety show passes away, his son is obligated to reunite a weathered cast of television performers and host the final episode.

Reinaldo Arenas – Director/Screenwriter: Lucas Leyva. (USA)
Told from the point of view of a dying shark, the film captures the last moments in the life of an unintentional immigrant in downtown Miami.

A Scene at the Sea – Director/Screenwriter: Jaehee Lee. (South Korea)
A father and son, roles now reversed as one becomes the caretaker of the other, execute a delicate dance at the edge of the sea.

Silent River – Director/Screenwriter: Anca Miruna Lazarescu. (Germany)
US Premiere
Gregor and Vali want to get away from Romania and the Ceausescu regime in 1986.

Soy Tan Feliz – Director/Screenwriter: Vladimir Duran. (Argentina/Colombia)
US Premiere
Fragments of a Saturday winter day with the Vittenzein brothers, who find themselves in a strange intimacy on a stop during a drive to their mother’s house.

Follow the Sun! – Director/Screenwriter: MK12. (USA)
An homage and/or affront to a Great American Tradition: the drive-in intermission snack reel.

The House – Director/Screenwriter: David Buob. (Germany)
A family story in a revolving house.

The Observer – Director/Screenwriter: Abbey Luck. (USA)
World Premiere
A disenchanted citizen learns how to free his village from a tyrant king by observing patterns in nature.

Peekaboo – Director/Screenwriter: Cecilia Fletcher. (USA)
A woman must decide between reporting a crime and going on vacation.

Soil – Director/Screenwriter: Meejin Hong. (USA)
As imagery transforms between figures and abstraction, the life cycle of an organism and dualities within human nature are explored.

Ben Franklin Blowing Bubbles at a Sword: The Journeys of a Mental Athlete – Director:Jonathan Napolitano. (USA)
World Premiere
Three mental athletes stretch the limits of their minds as they train for and compete in the 2011 USA Memory Championship.

The Devotion Project: More Than Ever – Director: Antony Osso. (USA)
The inspiring true story of two men who forged a 54-year love story despite the odds.

I’m Never Afraid! – Director: Willem Baptist. (The Netherlands)
Eight-year-old Mack ‘the motor midget’ should be dead but nothing is stopping him.

The Lookout – Director: Brian Bolster. (USA)
World Premiere
Watching over some of the most fire-prone landscape in North America, a Fire Lookout reflects upon his work.

Murder Mouth – Director: Madeleine Parry. (Australia)
Could you kill what you had for dinner? Maddie, a 21 year-old meat eater, decides to take the question into her own hands.

No Relation – Director: Kieran Dick. (Canada)What is real and how do you capture it?

No Wine Left Behind – Director: Kevin Gordon. (USA)
An Iraq War hero leads a ragtag group of veterans as they try to conquer the wine industry.

The Professional- Director: Skylar Nielsen. (USA)
Metal-fabricator Neil Youngberg never planned on taking over his grandfather’s business and is now faced with passing on his legacy.

We Win or We Die – Director: Matthew Millan. (Libya, USA)
World Premiere
The inspiring story of one man’s heroic sacrifice that liberated a city from the yoke of oppression.

You Can’t Win – Director: Jorge Torres-Torres (Puerto Rico/USA)
World Premiere
A typical night at the cockfights in the island of Puerto Rico.