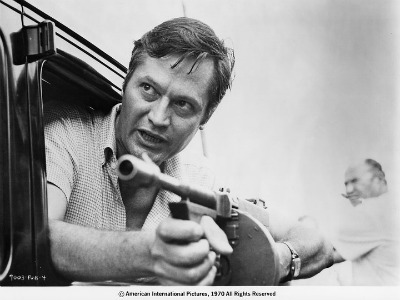 Director Alex Stapleton shares a scene from his documentary “Corman’s World: Exploits of a Hollywood Rebel,” which delves into the life and legend of Roger Corman, the indie filmmaking trailblazer. Here, Martin Scorsese and Paul W. S. Anderson reflect on their first impressions of the man. “Corman’s World” opens in limited release on Friday, Dec. 16.

Roger Corman definitely proves true the old phrase, “Don’t judge a book by its cover.” When I first met Roger, I was expecting to meet a cigar-smoking, gold medallion-wearing, very hairy, overweight loudmouth producer. You know, the cliche of what a master of low-budget, genre pics would be like. What I got was the complete opposite.  He was refined, well-mannered and stately in his appearance and his speech.

I met Roger for the first time in 2006 while interviewing him for a pop culture/arts magazine called Tokion. I had this plan that immediately after our interview I would pitch him my idea to make a documentary about his life and career.  Before I met Roger, I envisioned him to be a larger- than-life character, so over the top and obnoxious that a doc on him would be riveting. But now I was face to face with him and I just kept seeing Fred Rogers from the children’s show “Mister Rogers’ Neighborhood.”

I kept thinking to myself that this would never be a good documentary because Roger was just too… well… normal. He was so kind and talked about his movies in such a matter-of-fact way that you almost felt guilty for associating him with anything having to do with exploitation.

Toward the end of the interview, I brought up his conservative appearance. I told him that I had to admit he was not at all what I expected. He laughed and said, “Well, wait a minute, you never know what’s going on inside someone’s head. My mind is like a boiling inferno!”

Then it hit me. This man is incredible! It was like okay, NOW I believe you are The Roger Corman!

So this scene is a personal favorite because after interviewing dozens of other people who had worked for Roger, I realized they too had the same feeling after their first encounter with Roger. It was validating to hear Scorsese say that he was just as perplexed by Roger’s image as I was. And it’s great that you see Roger in his pastel-colored living room wearing his oxford button-down shirt telling you what he told me a few years before when we first met.

We decided to put this scene in immediately after we spend time with Roger on the film set of a movie called “Dinoshark.” He is observing the position of a girl who has just been devoured by the dinoshark and her guts and torso have been washed up on shore.

We thought maybe that would serve as a glimpse into Roger’s boiling inferno.

This Article is related to: News and tagged Video, Video: In Their Own Words