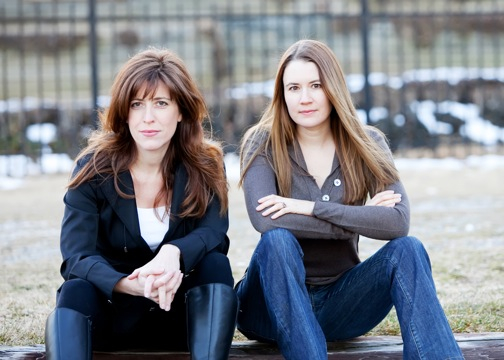 “We’re Not Broke” (competing in the U.S. Documentary Program) is a documentary from New York filmmakers Karin Hayes and Victoria Bruce, who initially wondered if anyone would ever want to watch a movie about corporate income tax. They’ve been filmmaking partners for almost a decade. Hayes says filmmaking is in her blood, whereas Bruce says she goes into each project “kicking and screaming.” They want to make a feature about a U.S. postal inspector who helped bring down the Sicilian mafia in the early 1900s.

What’s it about? “We’re Not Broke” is a documentary film that tells the story of how U.S. corporations dodge hundreds of billions of dollars in income tax.

Co-directors Karin Hayes and Victoria Bruce say: “When we first began production for our film, the topic seemed so obscure, we wondered how we’d get anyone interested in actually seeing a film about corporate income tax and offshore tax havens. What a difference a year makes. The topic of multi-billion dollar corporations playing unfair with the American people is now one of the biggest topics of our time. Our film tells both the economic and political story behind the corporate curtain, and the emotional and financial toll that these shady practices take on working Americans.

“This was by far the most complicated movie we’ve ever made. Like many of our documentary filmmaking contemporaries, we knew next to nothing about high finance. Looking back, our executive producer really took a leap of faith. We’d just finished an investigative, non-fiction book on the U.S. drug war in Colombia, which was really all he had to go by. At first, the subject seemed like simple math. But we realized quickly that there is no such thing as clarity in the world of corporate finance, and the convoluted ways that corporations are able to avoid federal income tax was enough to make us pull our hair out. And when one of us thought we’d figured it out, and the other thought she’d figured it out but her take was 180 degrees different, we’d want to pull each other’s hair out. Fortunately we work mostly via Skype 200 miles apart, so we still both have hair.

“What a year ago was an obscure topic about corporations that dodge taxes, has exploded into the mainstream. However, there are still many people wondering what the Occupy Wall Street movement is really about and what has people so incensed. Our film lays this out in a really user-friendly way so that people will leave the theater understanding just how virulent the problem of corporate greed has become in our country and how Washington allows itself to be controlled by corporate interests.

“One of the films that inspired us was Eugene Jarecki’s “Why We Fight.” Jarecki did an amazing job laying out how the power of the military industrial complex, driven by the bottom line, has convinced our leaders that we must always be at war, and the more costly the war, the better. We also frequently went back to “The Corporation,” a 2004 film that is timeless, incredibly maddening and one of the best films made on how we got where we are today with the stranglehold of corporations on our democracy.”

Karin adds: “Halfway through shooting the film, with a much better understanding of the effects of corporate tax avoidance, we still lacked a clear way to connect it to the everyday person. I read an article in The Nation, which did just that. It described a protest movement called UK Uncut that sought out corporate tax dodgers and related their tax avoidance to public service cuts. Knowing that something important was happening, we were immediately on a plane heading to film Carl Gibson and the beginnings of US Uncut in Jackson, Mississippi. We soon discovered that the idea was spreading across the country.”

Victoria says: “Working on this film has been a life-changing experience. I’m 45, and I’ve always felt like my generation had such an apathetic attitude toward our own political well-being. We just took for granted that whomever we voted for would have our best interest in mind. It really has taken a new generation to wake us up and make us realize that we’d had our heads in the sand. When companies began outsourcing our manufacturing jobs in Detroit and sent jobs to Mexico 20 years ago, we all said, ‘Yea! Now we can get cheaper cars.’ When we closed down textile plants, we said, ‘Woo-hoo, we can get $5 T-shirts from China.’ I’ve had to totally reevaluate my entire life as a consumer, and now as a mother and as an American. And I’ve come out knowing that I have to be part of the solution.”

Indiewire invited Sundance Film Festival directors to tell us about their films, including what inspired them, the challenges they faced and what they’re doing next. We’ll be publishing their responses throughout the 2012 festival