Michael Moore: Best Documentary Oscar Will Be Chosen By the Full Academy 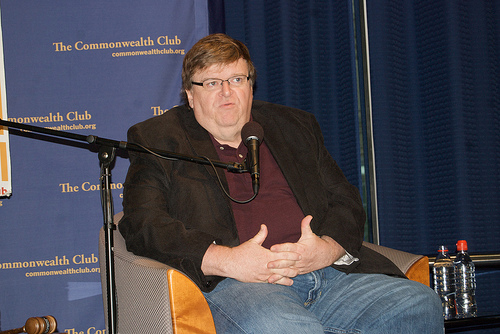 Michael Moore told Indiewire that the new Academy rule requiring a Los Angeles Times or New York Times review to qualify documentaries for Oscar consideration is only one of many “great new changes” that will “prevent the concerns that have existed since ‘Roger & Me.'”

“The concerns,” of course, refer to the now-perennial story of the popular and well-regarded documentaries that are overlooked by the Academy every year. This year, it’s “Senna” and “The Interrupters;” last year it was “Waiting for Superman” and “The Oath.” However, Moore says he believes a new set of rules for best documentary candidates, which the Academy will announce later this week and will take effect for the 2013 ceremony, greatly increase the odds that all theatrically released documentaries will have a fair shot.

Here’s the highlights of the new Academy rules:

The current documentary voting system works something like this:

Although it’s a system that saw Moore win an Oscar in 2003 for “Bowling for Columbine,” it’s one he called “byzantine” and in dire need of an overhaul. “Two people can’t torpedo your opportunity to get an Oscar,” he said. “That’s over.”

In an email to Indiewire, “The Interrupters” director Steve James said in a branch of 160 documentary filmmakers, it’s almost impossible to get enough qualified volunteers to make the system work.

“I certainly understand the impulse behind the change because having to have a committee of volunteers within the Doc Branch consider 124 films in a given year when they can’t participate if they have any formal connection to any of those films… That has got to make it hard to even have a substantial number of active documentary filmmakers even participate in the judging. With so few people looking at any given film, it only takes one to dislike a film and its chances for making the short list are diminished greatly. So they’ve got to do something, I think, to make the process more sane for deciding the shortlist.”

Added Moore, “In my little speech to [the Academy Board of Governors], I said, ‘When people get the award for best documentary and they go on stage and thank the Academy, it’s not really the Academy, is it? It’s 5% of the Academy.'”

Andrew Rossi, director of “Page One: A Year Inside the New York Times,” said the new system sounds more fair than the Academy’s traditional method.

“Most people seem to think that the reason why certain frontrunners end up getting excluded is because of arbitrary results produced by the previous method of having multiple screening committees view a small selection of the eligible films, each of which determine their own top choices for the shortlist,” Rossi wrote in an email to Indiewire. “So in the lesser of two evils category, having two newspapers contribute to the vetting process seems a small price to pay for improving the shortlist phase.”

Moore says the reviews mechanism is in place as only one of “three or four benchmarks” to ensure that the documentary is “truly a theatrical motion picture, because that’s what these awards are for.”

Of course, just as film journalism has seen its critics fall in the face of economic pressures, so has theatrical film distribution felt the squeeze.

Under this new system, a shortlisted documentary like “Semper Fi” doesn’t qualify for an Oscar; it screened through the International Documentary Association’s DocuWeeks program. “Semper Fi” has not found a theatrical distributor and is slated for a digital debut through New Video.

“I played [“Semper Fi”] at my film festival,” says Moore, who hosts the Traverse City Film Festival in Michigan. “It won one of the jury awards.”

Moore is a passionate believer that Oscars are only for those films that screen inside theaters. “TV movies have an awards system. It’s called the Emmys,” he said. “I have one. I’m proud of it.”

James said he agreed with Moore’s theatrical thinking. “Should reviews in NYT and LA Times be the bar? Maybe, maybe not… But they need some kind of bar and it strikes me that this is reasonable. The Academy is supposed to award theatrical films. And it’s not like suddenly there will only be 30-40 films that qualify like it was back when ‘Hoop Dreams’ came out. If you’re required to play theatrically in NY and LA as currently is the case, it doesn’t seem farfetched to add this requirement to me. I can’t speak for the LA Times, but certainly the NYT is pretty comprehensive in their coverage as the article makes clear. They probably review at least 100 docs a year between capsule reviews and full reviews. In fact, they may find that these changes don’t significantly diminish the number of qualifying films, but I’m not the one to judge that.”

However, with theatrical audiences shrinking and digital audiences growing, it remains to be seen whether that line of demarcation will remain.

“What if these newspapers began reviewing films released on the web or on demand first? There are definitely some docs which the Times reviews both after an initial television broadcast and then again during a later theatrical run,” says Rossi. “Would the papers’ critical recognition of those movies bolster other arguments to loosen the Academy’s theatrical requirements? That would be ironic, indeed.”