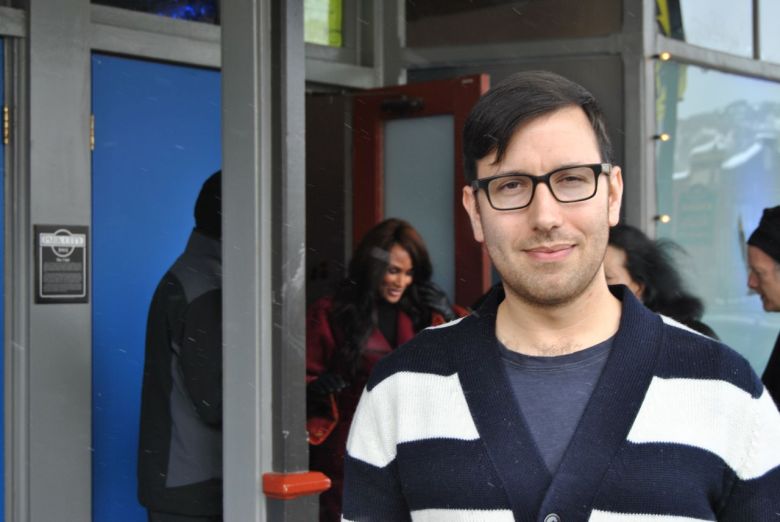 Why He’s On Our Radar: After directing a series of darkly comic shorts (including 2010’s “The Armoire,” which screened at Sundance), Jamie Travis is making his feature debut with “For a Good Time, Call…” Already picked up by Focus Features, the raunchy comedy has attracted much buzz since debuting this past weekend. Written by Katie Anne Naylon and Lauren Anne Miller (who also stars), the film follows two former frenemies who bond when they start doing business together via a phone sex line.

What’s Next: “I think that my next project will probably another film I have not written myself,” he said. “I am writing right now, but I think I’m more of a director than a writer. I feel like I can only write a film every five years or something. And I know eventually I will. I just don’t want to push something out there that’s not ready. But if I can connect to someone else’s script, this project has proved to me that I can do that and that I don’t have to be the writer and director.”

How did you get into filmmaking?

I took a traditional route of getting into film. I went to film school at the University of British Columbia. After being a biochemistry major and an English lit major, I ended up in film because I realized it was kind of the only thing I truly care about in life. I made a bunch of short films in film school and outside of film school that played at Toronto and Sundance and got me enough attention to continue making them and continue having them funded.

I’d always been open to directing other people’s scripts. This is my first experience. My agent had been sending me scripts for years and I never put myself forward for anything, but this was the first script that I’d read that I loved. I could see it being a great film. It was so funny to read. I cried when reading it, I think, the first time. I also read it in one setting, which never happens. I get so bored in scripts. I also knew I was the right person for it. So I kind of experimented with going down to LA and interviewing for it and this whole steamroller kind of got going. It was actually a great experience for me. The freedom of directing without also being the writer is kind of amazing.

It must have also been much more collaborative than you’re used to.

This film was very collaborative, in a way that I’m not used to. Obviously there’s collaboration in all filmmaking, but this one was intensely collaborative. It was also the first time that I’d worked with actors who are real, live human beings. Or characters that are real live human beings, so I was working with actors to bring them to life. My short films have a very visual kind of humor and the characters are more objects than they are in this film.

This obviously a very female-driven film. And I appreciated how the driving motivation of the two protagonists had nothing to do with fulfilling themselves with men.

This was something that was attractive to me, that it is such a female-driven film. It’s a romantic comedy between two women as friends. It’s like a friend romance. There’s a lot of films like that from the ’80s that I love and I feel like it’s a genre that sort of went away — those Bette Midler movies and the Shelley Long movies. They were films about females.

Studios certainly don’t make those movies anymore. Aside from perhaps “Bridesmaids,” but that’s a definite exception to the rule.

What’s your advice for up-and-coming filmmakers?

Keep making films. And make films for the right reasons. Don’t plot to make money or fulfill some sort of hype. That might sound ironic, because this film is very much in the world of “Bridesmaids.” And anybody who is going to write about it is going to compare it to “Bridesmaids.” But it’s a really personal story that’s sort of autobiographical in nature for the writers, and it’s sort of a passion project for them. I felt that in the script. It wasn’t a ripoff of anything at all.

But, yes, to answer your question, I would say make things that you’re passionate about. Make things that are close to you. A lot of the short films that I’ve had success with have been personal enough that I feel embarrassed. They’re sort of confessionals. Maybe that’s something that drew me to this project, too. The writing came from such a personal place. And these girls were so willing to expose themselves and embarrass themselves. And I think that’s a good general statement for filmmaking. Regardless of whether it’s about your own life or not, you always have to put a certain level of yourself into it.

This Article is related to: Features and tagged For A Good Time, Call..., Futures, Sundance Film Festival