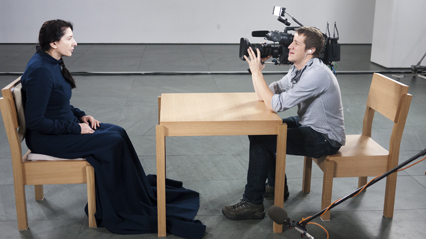 In spring 2011, hours-long lines stretched outside the Museum of Modern Art as people waited to see a retrospective of performance artist Marina Abramovic’s work. This included a new performance, “The Artist is Present,” in which Abramovic would sit across from one museumgoer and the two would stare at each other for as long as the patron liked.

[This interview originally ran during the 2012 Sundance Film Festival, where “The Artist is Present” had its world premiere. It’s currently playing at New York’s Film Forum, and airs on HBO, July 2.]

Sitting down to speak with Indiewire the afternoon following the Sundance world premiere of “Marina Abramovic The Artist is Present,” Abramovic looked around the atrium of the Park City Marriott hotel, grasped the solid table in front of her and asked the film’s director, Matthew Akers, “Is this real stone?” “No,” he said. She rolled her eyes. “I don’t get America.”

How did the two of you collaborate? Did Marina have control over the film?

Abramovic: I’ve seen a few versions, but that was the first time I saw that version.

Akers: (joking) She had no editorial control. We made her sign everything away.

Abramovic: (joking) They took away everything from me. Basically, I’m a total victim.

Abramovic: (joking) No. I have a problem with being a hero, but that’s another problem.

You’ve preserved your work in a number of ways.  How important is documenting your performance?

But then I started thinking, this is not right, I would be left with nothing. I had to leave some traces. In the beginning, I would give complete instructions to the photographer. In the ’70s, people would come to photograph your work and you would just end up with this crazy material that had nothing to do with your work; maybe I’d pick up two or three photographs that were the closest to the idea. This is why when you look at the ’70s, you see much less documentation and really bad material. The material will become misleading to what the piece was.

When I did “Seven Easy Pieces,” I actually re-performed the performances of other artists. It was such difficult work because I had to really go through the documentation, look through the sources, to ask the witnesses who saw it. And you know the movie “Rashomon” from Kurosawa, when all the people in the forest see something different? Each performance was like that.

When I first had a video camera to document a performance, it was in Sweden and I remember it was really crucial for me. I didn’t give any instruction to the video, because it was a new medium. I didn’t know what to tell him; it was so young. I did the piece and immediately after the piece, I wanted to see the material. So we rewound, and it had nothing to do with my performance. The guy was focusing on my feet when I was doing something with my head. Zooming in, zooming out. I was shocked. I said, “Let’s erase this right now, put the camera behind the stage and I’ll do the performance just for the camera.” He set up everything and I told him to go outside and smoke a cigarette. Come back when I finish. Don’t touch the camera. This was the way how I’ve done most everything after that.

The documentation that we used for the film, I had to give up control at this point. I wanted to be able to let Matthew make what he wanted to make. I was complaining, because let’s say there was a piece where I was dancing tango and there was a special music for that. Screaming in my piece was overlapped with music. But at the same time, the movie is images, and they talk itself. The only thing I can really object to is to write the duration of the titles, so people can understand how long — 8 hours or 10 hours — since they’re only seeing 30 seconds of the video.

Akers: I’ve been thinking a lot about documentation. In some ways, this is the crux of the issue of making the film, because performance art is an ephemeral medium. So where does my role as a documenter begin and end? And where does my work as a filmmaker — someone who’s taking artistic liberty to tell my story as I saw it or as the film team saw it — begin?

“The Artist is Present” is actually the only thing of Marina’s that I’ve witnessed myself. The true transformative power of her performance art at least in that performance can only be obtained by being there and taking part, and so I think documentation is a secondary representation and it loses something. So even though I had seen all of her documentation and she had been careful to be minimal with the way she documented it, that’s not necessarily retaining the full power of that performance.

If you construct an artifice with music, editing, and graphics as we did, I think that’s almost as accurate a representation of that performance as the straight documentation. She may disagree with me. No matter what, any art, when you experience it, you’re experiencing it in your mind. When you’re experiencing a painting, you’re formulating your experience of that painting in your mind. Same as when you’re live in the space with Marina. You’re witnessing documentation of that, too. So I think that the artifice that you construct, it’s subjective in some way. This film documents an experience that I witnessed people having and that I felt like I had. And so I felt that the artifice was necessary. The straight video in itself isn’t of itself powerful for me.

Below is a gallery of photos from the film’s premiere party. All attendees received a white lab coat and white headphones and were required to be silent. Abramovic said she thought the idea was “perfection.” The interview continues below.

What considerations did you make when you were presenting the works of art?

Akers: We knew that the film was primarily about “The Artist is Present.” I shot so much footage with her over the course of 10 months, 11 months. I could make several films.  We delved deeply into some subjects.

Abramovic: We went to India, went to Yugoslavia.

What was your reaction to the film’s representation of the 2011 piece, “The Artist is Present?”

Abramovic: I think it was really the best possible way; I could not imagine it differently. It’s so complicated to explain. Matthew has been with me for one year.  He saw all the preparation. He became a part of the process, so for me he was like an eye, always being there. I think that I could not imagine it any other way than the way he presented it. I could imagine other ways to present my other performances and to present my relationship with Ulay [Marina’s former lover and collaborator], the things surrounding it, because there’s so many ways to approach this.

For the duration of the work, you were the one looking at these people. What was it like re-seeing these people, experiencing this work from a different angle?

Abramovic: I remembered every person; I had such an intense relationship to every person. I still see people on the street and we lock eyes, and say “Oh my god!” and we just kiss and stay like that and sometimes cry.

The person who sat 21 times with me. The first time he sat, he sat 2.5 hours. The next day he sat seven hours. He was the only person who sat seven hours. From the morning to the evening. And he kept coming. He became a sort of guardian angel. He arrived and we would just sit sometimes and he would give me energy for the piece. He got it tattooed on his arm — 21 — so I started to know this person on a most intimate level and I think that my intimacy with my family isn’t as strong as it is with him, because I’m linking my eyes with a complete stranger. Finally, when the performance was finished, he was there and I couldn’t talk to him. I was stupid, I had nothing to say. “Hi, how are you?” My words had no meaning at all. And then we really became friends.

You create a friendship on a level that you’ve never done before. The basic kind of experience is to basically give love to total strangers all the time, and that really changed everything in me. And this piece transformed me more than any other one before. I saw my entire life differently. What do I have to do? What is my passion on this planet? I’m much more focused than I ever was before.

How are you feeling about bringing this film to a larger audience, on HBO?

Akers: I should just acknowledge Nancy Abraham and Sheila Nevins. Sheila actually came and sat with Marina. It’s so rare that you collaborate with someone like that — an executive that is just so interested. She came and she had an experience with Marina. She really is so thoughtful and so interested in telling stories.

There’s nudity in the film, so we just knew that we needed HBO, that it was the only logical home. It was a wholly independent film before we made the HBO deal. We were just paying for the film on our credit cards. And so that really saved us — it allowed us to be here. We very well may have been able to complete the film, but we would not have been at Sundance in 2012, and they have just been so supportive. HBO also has a certain cachet for doing really quality things. I also wanted this film to be in the masses; this is not a disposable film.

Abramovic: Television is completely another medium. For me, Lady Gaga and HBO are bringing us to mass culture. It was incredible, Lady Gaga came to see the piece. She didn’t sit with me, but it was all atwitter. Every single kid from 12 to 18 ran to see Lady Gaga and then Lady Gaga left and they stayed. And they stayed another day another day and it created a completely different culture, a different audience that I never had before

Akers: I don’t want to make a proclamation that I’ll regret later. In some ways, I hope that we’re crossing a threshold. As Marina brought performance into the mainstream because of this historical retrospective, that was the first of its kind. This film further does the same thing for performance art. It’s challenging and it’s not easy, and I feel like HBO is known for not being fearful of challenging material, and so that was another reason we knew it had to be HBO if it was going to be on TV.

Abramovic: And we wanted to prove that I am not just a provocateur, as the television said [referring to a Fox news clip shown in the film]. It’s challenging, but it’s not just challenging. I’m talking about intellectually and emotionally challenging, but at the same time it’s actually not that challenging. So there’s this dichotomy.

As our interview ended, Abramovic said she wanted to sit at a different table for her next one. “Always change things up. Even if you’re buying milk, always buy a different kind.” And then she added one more bit of advice. “And always talk to strangers.”

This Article is related to: Festivals and tagged Interviews, Marina Abramović: The Artist Is Present, Sundance 2012 Interviews, Sundance Film Festival