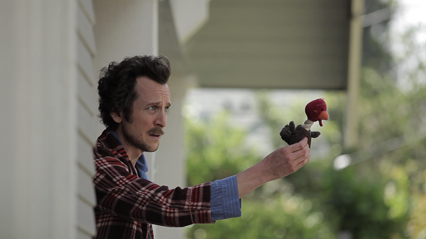 French director Quentin Dupieux’s wacky “killer tire” movie “Rubber” was a surreal investigation into high-concept storytelling that opened with a mission statement: Facing the camera, an officer explained all narrative events would take place for “no reason.” With his latest effort, “Wrong,” Dupieux takes that to an even further extreme, teasing out a story while relishing a steady bombardment of zany non sequiturs. Dupieux’s ridiculous foray into irreverence never aspires to transcend its fundamental silliness, but the continuing oddities accumulate into a singularly amusing head trip.

With a plot that suggests “Groundhog Day” remade by Luis Buñuel, “Wrong” haplessly plunges into the illogical routine of Dolph Springer (Jack Plotnick), a fragile, sad little man who awakes one morning to find his beloved canine Paul nowhere to be found. That’s not the only thing that seems a little off: His alarm clock announces the start of the day at “7:60 a.m.,” his palm tree inexplicably transforms into a pine tree and his office is constantly drenched in a strange case of indoor rain. Actually, it’s not his office; Dolph lost his job three months ago, as coworkers regularly remind him, but he sees no harm in returning his soggy desk each day and pretending to work.

Each time “Wrong” appears to move forward, it halts for prolonged sketch-like sequences that run circles around a single absurd conceit until it becomes a dizzying experience. Within minutes of launching his search for Paul, Dolph enters a phone conversation with a woman at the pizza shop who recently left a flyer in his mailbox–not to order lunch but to engage in lengthy analysis of the store’s logo and whether it makes any sense. In fact, it does (a rabbit on a bike, because rabbits are fast), unlike pretty much anything else that follows.

One could engage in a similar discourse about “Wrong” in the hopes of reaching some catch-all rationale. If “dog” is a backwards term, like everything in Dolph’s immediate awareness, could “Wrong” amount to nothing less than a religious quest? Sure, but that hardly negates its addiction to irreverence.

In one prolonged bit, Dolph’s gardener (Eric Judor), Victor, also grapples with an unseemly reality: When the pizza staffer falls for Dolph over the phone, Victor impersonates his employer and inadvertently leads the woman to propose marriage. The filmmaker’s decision to leave Dolph’s side means that “Wrong” is no focused portrait of subjective madness, but rather a broader attempt to portray a world of farcical chaos.

Written, directed, shot and edited by Dupieux (and credited for the funky score under his DJ name, Mr. Oizo), “Wrong” never compromises its juvenile commitment to strange developments, but retains a profound subtext. Dolph’s frustrations over his incomprehensible existence, a search for meaning made literal by his missing pet, give the movie sensationalistic value as pop philosophy. When William Fichtener surfaces as a cryptically accented guru in the business of discussing psychic energy in relation to dogs and their masters, “Wrong” doesn’t go off the deep end. Instead, it starts to make a twisted kind of sense.

Shot in vivid colors that evoke both pristine suburban and barren desert landscapes at various moments along its loopy trajectory, “Wrong” remains a beautifully crafted lark from start to finish. An opening shot featuring a fireman defecating next to a smoldering van sets the stage for each bizarre moment that comes next: Without taking the free-associative barrage too seriously, Dupieux never rises to David Lynch-level poignancy, favoring pranks and gags over deeper intentions.

But the relentless goofiness can take on a spiritual dimension for anyone open to it. When Dolph confronts one of the behind-the-scenes players responsible for his continuing issues, he puts it bluntly. “Why me?” he asks. The swift response: “Completely random choice.” That’s the ostensible mantra of “Wrong” and you either make peace with it or there’s no reason to bother.

HOW WILL IT PLAY? Just crazy enough for cult appeal, “Wrong” seems ready-made for cult appeal when it’s released by Drafthouse Films, which is well-positioned to capitalize on the movie’s bizarre appeal for niche audiences. But most of its success is likely to come from VOD.