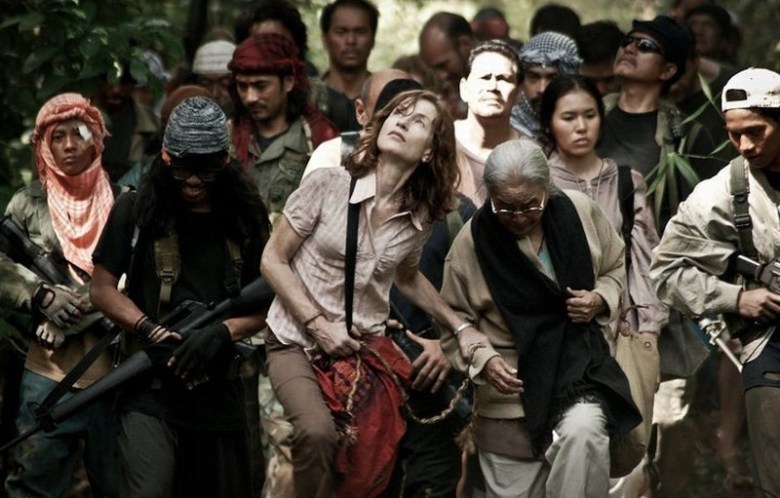 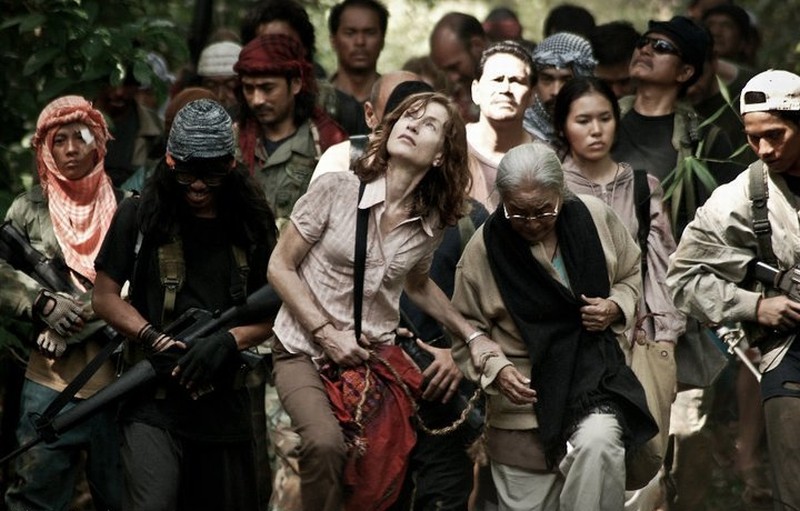 After a brief foray into quieter terrain with his 2009 feature “Lola,” Filipino director Brillante Mendoza returns to the provocative territory of his 2009 shocker “Kinatay” with “Captive,” another grim kidnapping story, this one far weaker in terms of both shock and quality.

A dramatization of the 2001 incident in which Muslim terrorist group Abu Sayyaf took numerous people hostage from an island resort, the movie follows them through nearly a year of hellacious wanderings through the Filipino jungle. At two hours, the best thing that can be said about “Captive” is that it makes you feel the sheer longevity that the hostages had to endure, but that’s not enough to salvage this mercilessly redundant thriller.

At first, Mendoza’s typically intense shaky-cam style holds promise; the initial rounding up of hostages and the ensuing initiation by their captors maintains a basic level of intrigue. Fiercely devoted to their cause, the gun-wielding outlaws interrogate their affluent prisoners to get a handle on their wealth. On a rickety boat drifting through the empty ocean, these exchanges create tension that quickly dissipates once they make landfall. Then “Captive” settles into a rhythm of running, shooting and shouting, with a few breaks for flimsy dialogue.

If you choose to focus on Isabelle Huppert, a good movie hides somewhere in “Captive.” The French actress plays a Christian aid worker boldly shouting down the kidnappers every step of the way; as usual, she’s a fiery, engrossing figure whose confrontational moments infuse the story with a tension it otherwise sorely lacks. Mendoza can direct suspense with the best of them, and his command of the medium is such that the early scenes of “Captive” manage to generate palpable fear. But once it fails to realize that potential, Mendoza heads down a road to nowhere.

The bad movie that mainly defines the “Captive” experience is epitomized by a CGI bird. This strangely colorful (and obviously artifical) being manifests itself at a late moment in the film, after the trapped characters have traipsed around the woodsy terrain for months on end, repeatedly bitching to their kidnappers. The nonfiction backdrop and passing conversations about the politics driving the situation imply that Mendoza wants to make something deeper than a genre exercise, but neither Huppert nor various plot twists can salvage “Captive.”

The few intriguing developments — a forced marriage between a hostage and one of the kidnappers, the unlikely bond Huppert’s character forms with an adolescent kidnapper — come and go like a series of vignettes. When a journalist finds the kidnappers’ camp and sits them down for interviews, a prolonged series of first-person confessionals take over as if “Captive” were suddenly an unfunny episode of “The Office.” That segment, like a few others, come across with the same misguided superficiality of that CGI bird.

“Captive” lacks any coherent emotional hook or worldly argument, despite taking on form and content that attempts to command both. Instead, it only evokes the sheer frustration of the situation and the ineptitude of various governments to resolve it. Everything is black-and-white: The terrorists are angry, the hostages are mortified. Ironically, “Captive” makes a good case for a movie that could be this dumb on purpose: Only the occasional bursts of gunfire inject life into the frame.

HOW WILL IT PLAY? The genre elements, limited star appeal of Huppert and real-life basis may help “Captive” find a solid theatrical life (at least more than Mendoza’s previous films), but bad word-of-mouth will likely bury its longterm prospects.