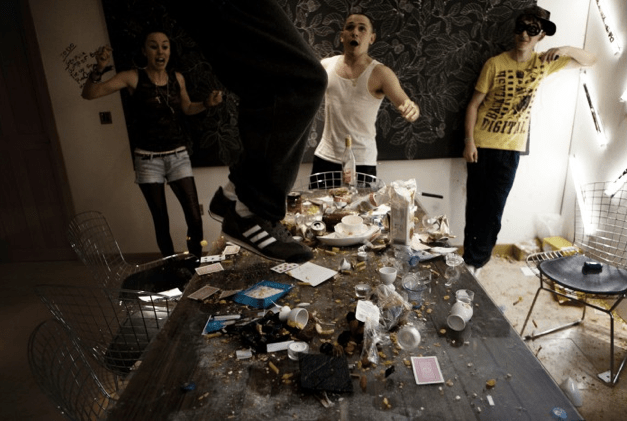 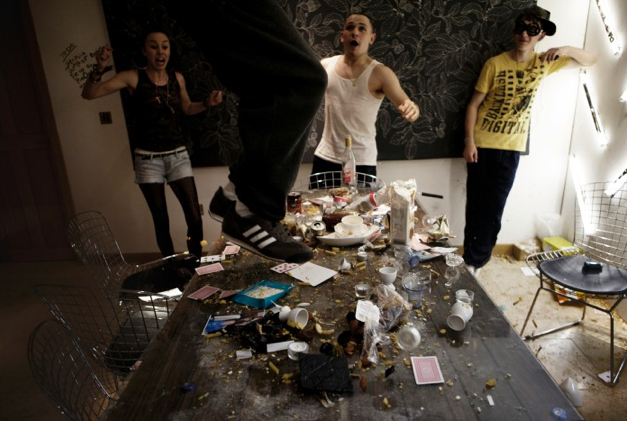 “Dollhouse” contains a deceptively simple premise that benefits greatly from its free-form style. Kirsten Sheriden, working on a smaller and more experimental scale than her previous efforts “August Rush” and “Disco Pigs,” follows an enthusiastic gang of young hooligans as they break into a  posh home and wreck havoc wherever they see fit. When the homeowner herself surfaces and joins in the fun, the evening grows increasingly strange and intangible, venturing beyond the realm of plausibility with a giddy approach that matches the intruders’ carefree energy.

Based off a 15-page outline that the small cast built out moment by moment during the shoot, “Dollhouse” signifies one of the more inventive uses of improvisation in recent memory. According to Sheridan in a Q&A following the film’s Berlin International Film Festival premiere, the actors discovered plot twists along with their characters.

The result is a naturalistic flow: It begins with the motley crew of unnamed ne’er-do-wells (Johnny Ward, Kate Stanley Brennan, Shane Curry and Ciaran McCabe) sneaking into the mansion where the entire movie takes place and gleefully tearing it apart. Drugs and alcohol flow freely; “Flight of the Bumblebee” bursts out of the stereo as one of the invaders cuts a move on the polished hardwood floor. Just when it seems like “Dollhouse” has little to offer beyond version of the reprobates from Larry Clark’s “Kids,” however, it transitions into something much stranger.

The circumstances turn from chaotic to mysterious when an eerie girl their own age named Jeannie (Seana Kerslake) appears in the living room, barefoot and adorned in a red dress, unbothered by her unruly visitors and amenable to keeping the party going. From there, “Dollhouse” maintains its histrionic mockery of wealth, with the group growing increasingly intoxicated and more distant from whatever reality the movie offered up in the first place. With the arrival of a cryptic “boy next door” (Jack Raynor) who hints at a romantic life he shared with Jeannie, the cast of “Dollhouse” is nearly complete, and it barrels forward in fits of enthusiasm and clumsiness, creating an enjoyably rowdy mashup.

Drilling furniture to the ceiling and running wild with markers in the hallway, Sheriden’s subjects ceaselessly live for the moment, embodying the escape from reality that the dispirited Jeannie apparently seeks from her affluent surroundings. “I never felt like I was right here,” she says, rejoicing in the mayhem. For all intents and purposes, the entire situation may exist in her head.

At least that would explain the increasingly disorienting structure of the later scenes, partly a reflection of Sheridan’s unorthodox approach as well as a confusing tendency to upend the relationship between the characters with inexplicable shifts in their behavior. One bad joint and the trip turns sour; the next minute they’re bonding over drinking games.

Each time the tension erupts, particularly due to the escalating temper of Ward’s character, “Dollhouse” theaters to devolve into a crass home invasion thriller, but it eventually doubles back for a miraculously poignant (if equally implausible) final act. The movie concludes with a baffling development moment that could lead some viewers to reject it entirely, but the loose direction encourages one to go with the flow, enabling a especially generous amount of wiggle room.

“Dollhouse” is intentionally all over the place, at times coming across like a caustic generational statement, then exploding into a near-tribal depiction of tribal disarray, and eventually settling into a punk-inflected morality tale. It overcomes an erratic, confusing nature through sheer unpredictability, and for the innovative way it renders a coming-of-age formula in attitudes and emotions. Even when the story is a mess, it still maintains its lively organizing principles.

HOW WILL IT PLAY? Set to make its U.S. premiere at SXSW next month, “Dollhouse” will likely play to a strong reaction at that youth-oriented festival, although it will likely face a hard time cracking the marketplace given its strange narrative and anarchic characters.

This Article is related to: Reviews and tagged Berlin International Film Festival, Reviews