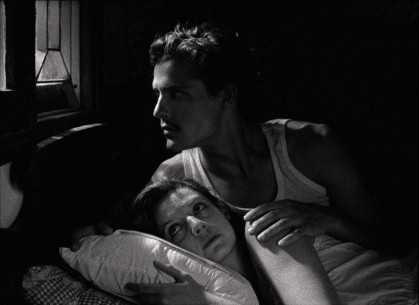 A head-scratchingly lyrical immersion into colonialist metaphor and historical memory, Portuguese director Miguel Gomes’ third feature “Tabu” reaches for the dreamlike experiences of Apichatpong Weerasethakul’s oeuvre with a bold structure that defies genre specifics. At the same time, for all its confusing and erratic qualities, Gomes (“Our Beloved Month of August”) has made a decisively cinematic work, tapping into classic film traditions while subverting them with consistent narrative invention.

Not to be confused with the F.W. Murnau movie of the same name, “Tabu” nonetheless borrows the expressionistic style of the earlier film’s period, using luxurious black-and-white photography to alternately drain the life out of a boring world and transcend it with the magic realism of the alternate reality that eventually takes over. Gomes breaks his movie into two very different parts: The first, entitled “A Lost Paradise,” serves as an unsuspecting introduction to the second half, when it launches to another plane.

But first the easy stuff: Middle-aged Lisbon resident Pilar (Teresa Madruga) takes an interest in the final days of her apartment neighbor Aurora (Laura Soveral), an elderly woman suffering from a gambling addiction. In the wake of her death, Pilar discovers letters in the late woman’s home that reveal an epic love affair from her murky past, at which point the movie flashes back for its second part, “Paradise.” But “flashback” doesn’t quite describe the abrupt shift to storybook romanticism that defines the rest of the running time, when “Tabu” essentially becomes a silent film exclusively narrated by Aurora’s lover but otherwise containing no spoken dialogue.

However, the surreal place where the majority of the story unfolds doesn’t exactly come out of nowhere. A hypnotic introductory segment set in Africa immediately sets “Tabu” apart. In the opening minutes, an “intrepid explorer” roams the jungle while a narrator (Gomes) explains the man’s dire need to escape the reality of his wife’s death. Tortured by her phantom at every turn, he eventually reaches his own fate at the jaws of a crocodile. That’s the movie in a nutshell: “Tabu” contains a lot of crocodiles of various shapes and sizes, shimmying through the tragic romance at the heart of the picture like a reptilian Greek chorus.

With its clever use of nature to service an elusive agenda, “Tabu” calls to mind Weerasethakul’s “Uncle Boonmee Who Can Recall His Past Lives,” but mostly it exists in a world apart from anything else. In the flashback, young Aurora (Ana Moreira), the aimless daughter of an accomplished hunter, winds up in an awkward love triangle with her affluent husband (Ivo Muller) and the dashing traveler Gian Luca Ventura (Carloto Cotta), with whom she engages in a passionate affair. Gian Luca brings a friend in tow whose band frequently serenades them in their posh mansion, while an army of servants attend to every need.

The situation builds to a curiously insightful representation of colonialist misdeeds, but plays hide-and-seek with its deeper themes, sometimes pitting the conceptual aspirations against the possibility of emotional payoff. But even when it favors the cerebral approach, the spectacle maintains its allure. Gian Luca, whose poetic voiceover dominates the movie, bemoans “the despairing impasse of my situation,” a verbose complaint that Gomes complements in visual terms. The director both embraces colonialist fantasies while hinting at their dark side. No matter how deep you dig for answers, “Tabu” delivers that much in a perfectly tangible fashion, ending on a note both supremely gorgeous and dangerously remote.

HOW WILL IT PLAY? A leading contender for Berlin’s Silver Bear, “Tabu” divided audiences at its first screenings, but many viewers felt very strongly enough to suggest that it will have both a long festival life and even popularity at U.S. art houses, both of which should propel Gomes to far greater acclaim than his earlier films have received.