Could Tugg Become the Kickstarter for Indie Exhibition? 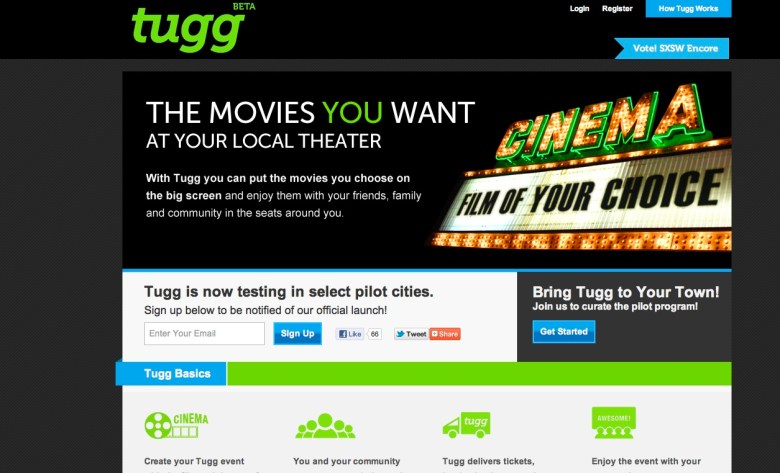 The DIY movement may have a new champion with the launch of Tugg, a crowdsourced exhibition site whose partners include Alamo Drafthouse Cinemas and AMC Theaters, and with Richard Linklater, Ben Affleck and Terrence Malick as board members.

Launched by “The Tree of Life” producer Nicolas Gonda and marketing executive Pablo Gonzalez, Tugg is designed to allow anyone the opportunity to book a film screening through one of the partner cinemas. If you want the theater to screen a film that’s part of Tugg’s library, you drive users to express their interest at Tugg.com.

Once the numbers hit a threshold, the screening’s on. Tugg will handle the details with the theater, including print and theater rentals and ticketing; your viewers then pay only the ticket price.

Now in beta, Tugg’s official launch will take place during SXSW; at that point, they plan to announce their intial distribution partners. Tugg will also have their own execs on the ground in Austin, looking for films from distributors, studios and filmmakers.

However, the most compelling elements of the Tugg model are what it could mean for indie films that do and don’t have distributors. For example, will Tugg allow small cities to see indie films that would otherwise pass them by? (“Shame” in Missoula, MT? “Michael” in Galveston, TX?) Better yet, could the site provide a new distribution model for self-distributing filmmakers?

For now, the answers to those questions are frustratingly opaque. Tugg won’t reveal anything about its upcoming distribution partnerships, although art on the website suggests a heavy emphasis on mainstream Sony titles including “Zombieland,” “Julie and Julia” and “The Social Network.”

And as to the actual costs of booking a film through the service, we’re told that information is proprietary and currently limited to its beta partners. However, individual filmmakers can submit to films@tugginc.com and work out a deal on an individual basis.

“As the film exhibition industry continues to evolve, AMC Theatres remains committed to staying at the forefront of innovation, which is why we’ve been proud to work with Tugg from the very beginning to determine the feasibility of its platform,” said Robert J. Lenihan, president of Programming at AMC Theatres in a statement. “As we continue to evaluate the program through trials at our theatres, we’ve experienced its potential firsthand through successful results by not only putting the choice directly into our guests’ hands, but also through the power of grassroots, guest-advocate marketing.”

This Article is related to: Toolkit and tagged News