Ti West On the Real Haunting That Inspired 'The Innkeepers' 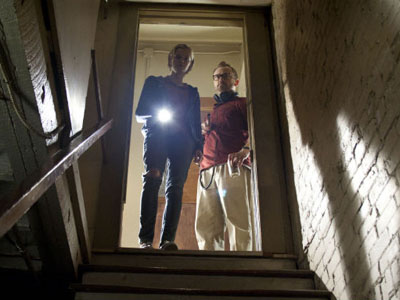 Ti West is back to his scary tricks with “The Innkeepers,” his anticipated follow-up to his indie horror smash “The House of the Devil.” In the haunted house thriller (which debuted at last year’s SXSW film festival to solid notices), West updates the setting from the ’80s-set “House” to the present day, to tell a spooky tale set at the real life (and reportedly haunted) Yankee Pedlar Inn. Sara Paxton (“Shark Night 3D”) and Pat Healy (“Compliance”) star as two young hotel clerks on a mission to prove that the historic site is indeed inhabited by ghosts.

[Editor’s Note: This interview originally ran prior to the film hitting VOD. It opens in theaters this Friday, February 3.]

West caught up with Indiewire to discuss his latest foray into horror and the creepy true story that inspired him to make “The Innkeepers.”

The story behind the reason you made “The Innkeepers” is almost as good (and scary) as the film itself. Can you tell it for those who aren’t familiar?

Well the hotel that inspired the film is actually in the film. What happened was we were making my previous film “The House of the Devil,” and we were staying at this hotel called the Yankee Pedlar Inn because it was the best option to put the crew up. It was the cheapest and nicest place we could find and about 25 minutes from our location.

We would go and shoot this satanic horror movie nearby, but the weirder stuff would happen back at the hotel. It just started off kind of goofy, but it became this thing where most of the cast and crew started to think there was something up with the hotel.

The staff at the hotel believe it’s haunted. The whole town believes it’s haunted. So it has this kind of mystique to it. But what was charming to me about it, was that it’s this mixture of a historic, perhaps haunted building and totally bad ’70s renovation. The people who work there are in their twenties…part timers. So there’s this weird lore of the place. At the same time, the place doesn’t live up to it. So I found it really charming and interesting.

I wanted to make a ghost story. I was trying to think of how to do it cheap. Then I thought, “Why not make a movie we lived?” The place let us be there before, so they were likely to let us do it again. That’s kind of how it all came to be. They let us back in and we moved very quickly.

I didn’t know that the people who work there day-to-day bear a striking resemblance to the two leads in the film. Are they based on people you encountered at the hotel?

I don’t know that the people that work there are that much like our characters, but they’re in the ballpark. The vibe of the people who work there is very similar to the vibe of everywhere I’ve ever worked. I’ve only had minimum wage jobs or directed movies. I never had a fall back plan. Everyone that I sort of worked with in my 10 different part time jobs is kind of mixed up in these two characters.

Can you elaborate on those haunted happenings you witnessed?

Well I’m a skeptic so I don’t really buy it. But I’ve definitely seen doors close by themselves; I’ve seen a TV turn off and on by itself; lights would always burn out in my room. Everyone on crew has very vivid dreams every night, which is really strange.

The one story that is the most intriguing to me — In the film the most haunted room is the Honeymoon Suite. That’s where the ghost stuff started in the hotel. The only reason I picked the room that I picked to shoot in, was because it was big enough to do a dolly shot. No more thought went into it other than pure technical reasons. So when we’re finishing the movie, I find out that the most haunted room in real life, is the room I picked to be the haunted room in the movie. It could be a coincidence. It’s weird that it happened that way.

Did things continue to occur while you were shooting the film?

Yes. The thing is, one being a skeptic, I tend to not believe it as much. The other things is, when you’re making a movie the experience is so traumatic. I have enough things bothering me, so a ghost’s not going to be my problem.

But, absolutely. The dreams came back the first day I walked in. The vibe was there. Sara Paxton would wake up in the middle of the night thinking someone was in the room with her. Everyone has stories, but I was too busy saying, “Let’s shoot this! We have 17 days!”

Were the cast and crew wary of staying there?

I made one big mistake. Most people I got hyped on the idea that we were staying there. So when I met Sara Paxton, I got her really excited. I just really sold it to her. Two days later, while I’m getting ready to go Connecticut, I get a call from her agent saying, “Sara doesn’t want to stay at the hotel. She’s scared.” I called her agent, and said, “Have her stay the first night and if she hates it, we’ll move her.” So when she got there, she totally loved it. But I freaked her out by building up the mystery.

Yes, it was actually.

“The House of the Devil” had a lot of fun with ’70s and ’80s horror movie conventions, notably in the look and soundscape of the film. Why did you choose to forgo that this time around and tell a straight up ghost story?

I wanted to make a traditional, old fashioned ghost story, but with modern characters that don’t belong. A lot of the times characters in horror movies are almost like born and bred to be in horror movies. I always find that to be a letdown, because they do all that you expect them to do. So that’s why it was so important for me to make a charming workplace comedy. You could have no ghosts in it and it’s be OK, but when the ghosts show up it kind of raises the stakes.

As far as it not being ’80s; I got a lot of credit for “House” being a very accurate ’80s type movie. But all I was trying to do with “House of the Devil” was make a period piece. The last I thing I wanted people to do was call me out for doing a bad job doing a period piece, because it was the one thing we didn’t have enough money for, so we had to work extra hard to pull it off. It kind of blew up into this whole, “You made a movie that looks like it was made in the ’80s!” I guess we did, but it was also like, if the film were set in the ’50s, I would have tried to make it look like it was of that period as much as possible.

So this movie, being a modern type movie, there wasn’t a reason to stylize it that way. I think because the ’80s is such a retro, hip thing, a lot of people thought “House of the Devil” was ‘my style.’ I think to some degree it is, but that wasn’t really on our plate this time around.

This Article is related to: Features and tagged Interviews, The Innkeepers, Ti West