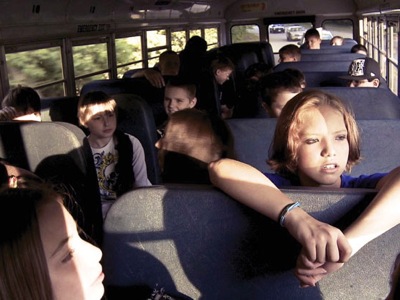 The Weinsteins have encountered a new hurdle with their documentary “Bully.”

The National Association of Theater Owners has threatened that, if “Bully” is released unrated, they may ask theater owners to treat the film as if it were classified as NC-17, which would bar all moviegoers under 18 even with the consent of a parent.

Which would make a movie about junior-high students available for viewing only by those college age and older.

“Bully,” the anti-bullying documentary we covered this morning has already engaged in a ratings battle with the MPAA and is now being supported by a popular online petition. The film received an R-rating for “some language” and The Weinstein Company believes the film would impact bullying in schools, but the film would need a PG-13 for its intended audience to see it. Weinstein has said he may have to release the film unrated.

This new warning was justified by John Fithian, CEO of NATO, who wrote to the Weinsteins: “You recently released the award-winning movie “King’s Speech” and must know the language rules very well. You should not have been surprised at the rating for “Bully.”

The Weinstein Company responded: “As a company we have the utmost respect for the National Association of Theatre Owners, but to suggest that the film BULLY could ever be treated like an NC-17 film is completely unconscionable, not to mention unreasonable. In light of the tragedy that occurred yesterday in Ohio, we feel now is the time for the bullying epidemic to take center stage, we need to demand our community takes action.”

The National Association of Theatre Owners partners with the MPAA in the rules and operations of the Classification and Ratings Administration. Exhibition representatives participated yesterday in the appeal of “Bully.” As you know, the appeals board voted to uphold the ratings board’s decision that the prevalence of harsh language in “Bully” warranted an “R” rating. In response, you released a statement criticizing the decision, and threatening to remove your company’s movies from the ratings process.

As the father of a nine-year-old child, I am personally grateful that TWC has addressed the important issue of bullying in such a powerful documentary. The filmmaker and especially the brave young people who participated in this project deserve our attention and respect. Nonetheless, I believe that your public response to the decision of the appeals board is unwise.

Surveys of America’s parents reflect their very strong concern with the use of harsh language in movies. The vast majority of parents surveyed have indicated that the type of language used in “Bully” should receive an automatic “R” rating. You ask us to ignore the preferences of America’s parents and our own ratings rules because of the merit of this movie. Yet were the MPAA and NATO to waive the ratings rules whenever we believed that a particular movie had merit, or was somehow more important than other movies, we would no longer be neutral parties applying consistent standards, but rather censors of content based on personal mores.

You recently released the award-winning movie “King’s Speech” and must know the language rules very well. You should not have been surprised at the rating for “Bully.”

I have nothing but tremendous respect for you and the work of TWC. Our industry is so much the better for your involvement. But if you decide to withdraw your support and participation in the rating system, and begin to release movies without ratings, I will have no choice but to encourage my theater owner members to treat unrated movies from The Weinstein Company in the same manner as they treat unrated movies from anyone else.

In most cases, that means enforcement as though the movies were rated NC-17 – where no one under the age of 18 can be admitted even with accompanying parents or guardians.

Thank you for your consideration of these thoughts. And the best of luck to you on Sunday.

This Article is related to: News and tagged Bully, The Weinstein Company