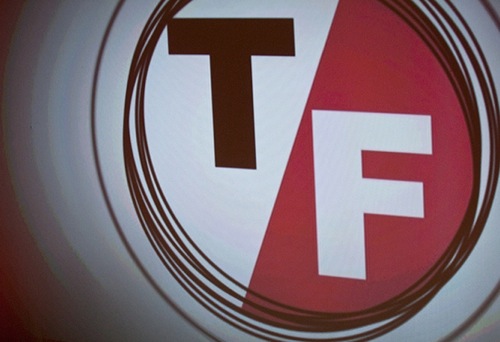 The 9th True/False Film Festival concluded yesterday in Columbia, Missouri. Over four days, thousands of folks congregated in Midwestern college town to take in a mix of (mostly) documentaries, innovative social events and — of course — the buskers that collectively make True/False such a standout doc fest for locals and visitors alike.

The festival’s “co-conspirators” Paul Sturtz and David Wilson met back in 1997 at a concert in Columbia, where Sturtz approached Wilson with the idea of starting a film series.

“I kind of thought nothing of it,” Wilson recalled. “People have ideas at bars all the time.”

But two days later, Sturtz called him and the film series started the following January. The series went on for five seasons and resulted in the building of the Ragtag Cinema, now Columbia’s beloved downtown art house cinema. It also led to Sturtz and Wilson’s decision to take their ambition one step further and start a full-on film festival. In 2004, that became a reality with the first True/False Film Festival.

“It was basically a weekend with Friday night,” Wilson said. “I feel like the total budget for it was like $60,000. Which seemed like a lot to us at the time. And at that time we’d learned how to get an audience and we’d learned how to put on shows. But I’m fairly certain I will never again work as hard as I worked on the first few years of True/False. Paul and I were working like 18 hours a day… And then we ended up with 4,400 people attending, which felt really great. So we just kept doing it.”

Nine years later, True/False has developed into a true gem on the American film festival circuit, with filmmakers, programmers and anyone else lucky enough to make their way to Columbia in awe of the many ways the festival has set itself apart from the others.

“The funny thing is that on one hand our growth has been really fast,” Wilson said. “This year, I’m pretty sure we’ll have over 35,000 in attendance. But it’s also felt really organic. We feel like we’ve actually moved really slowly. We’re always trying out new ideas but we’re very careful about expanding the fest.”

It seems the vast majority of True/False attendees would agree: If it ain’t broke, don’t fix it. Wilson and Sturtz have managed to create something really unique and special with the festival, and here’s five reasons why:

1. The secret screenings and the non-existent premiere statuses.

Over the course of True/False, seven different films screen under mysterious descriptions headed simply by a color (“secret screening red,” “secret screening gold,” etc.). The screenings are consistently packed with both people and curiosity, as it’s not until the screenings start that audience members discover what they are seeing.

It’s a fairly remarkable tradition in that True/False audiences — especially in the world of Twitter and Facebook — have wholly kept mum about. They are instructed not to make known what exactly it is they’ve taken in, which allows the screenings to continue year after year.

The reasoning isn’t the gimmick per se, but the fact that otherwise the filmmakers would probably await berths at fests like SXSW, Tribeca or Hot Docs, where premiere status dictates whether or not they can screen there.

“It’s a total negotiation and there’s a lot of nervousness around it,” Wilson said of the screenings. “The festivals we work with that are premiering those films are fantastic to work with it. But they have their concerns, so it’s a process. Would it be easier if we didn’t have to do it? Yeah. But I’d rather show a great film and have to sort of jump through some hoops then not show it at all”

Wilson recalled that in True/False’s first year, they had “Midwest Premieres.”

“What we’ve figured out since is the thing that I’d think every small festival should figure out,” he explained. “Which is basically, ‘Who cares?’ I mean,  who cares whether you have a Midwest premiere or a west-of-the-Mississippi premiere. When you’re talking about those things, you’re making yourself better. You’re doing it for the fest, and the fest’s prestige, and the fest’s ability to do whatever. You’re not really doing it for the filmmakers. I think there’s a tiny handful of festivals where the premiere status really benefits filmmakers. And when it does, it does. I don’t dispute that. There are things about that premiere that are important.”

What the secret screenings does offer filmmakers is an opportunity to test drive their films before making their way to festivals where they can potentially get bought.

“Maybe we can offer something to filmmakers that they don’t get at their premiere,” Wilson said. “That is different and can dovetail with that. I was just talking to a filmmaker with a secret screening here who was talking about the feedback at the screening. He’s still tweaking his film. He’s got his premiere all set, but he’s still tweaking. And he had four minutes to cut, and now he knows what four minutes. That’s awesome. That’s one of the things we can do. Be a dress rehearsal and let people work out the bugs.”

There’s also plenty of non-secret screenings at True/False that are just as worth one’s time. The festival’s heavily curated program offers the best of bigger festivals like Sundance and IDFA. This year, for example, the likes of Alison Klayman’s “Al Weiwei: Never Sorry,” Mads Brugger’s “The Ambassador,” Heidi Ewing and Rachel Grady’s “Detropia,” David France’s “How To Survive a Plague,” Matthew Aker’s “Marina Abramovic: The Artist Is Present,” Chris Moukarbel & Valerie Veatch’s “Me @ The Zoo,” Lauren Greenfield’s “The Queen of Versailles” and Malik Bendjelloul’s “Searching For Sugar Man.”

But there’s also some discoveries. A dominant example this year was “Only The Young,” the debut film from Elizabeth Mims and Jason Tippet. Screening as a sneak preview, the film follows two high schoolers who are exploring the world of girls and enjoying their loving bromance. A stylized look at the two men’s lives that mixes testimonial interviews with with scenic shots of the adventures the friends go on with each other and with their girlfriends, Indiewire interviewed the film’s directors here.

3. The lack of industry.

While industry folks certainly attend True/False, it’s more for pleasure than business. Numerous folks at this year’s edition seemed to go out of their way — often on their own dime — to make their way to the festival. Because by avoiding premiere statuses and being any sort of market, True/False provides a sort of safe haven for anyone — filmmakers, programmers, distributors — exhausted from the business side of film festivals. Instead, it becomes about the films and about creating a sense of professional community that can sometimes get lost amidst the wheelings and dealings of major festivals. 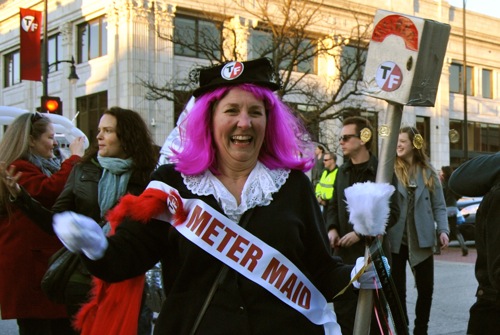 “Because of our location and because of our attitude, we’ve cleared this space where we don’t have to be an industry-driven event,” David Wilson said. “And I feel so lucky to have that space. I don’t want Sundance or Tribeca or SXSW or Hot Docs to go away. But it’s such a boon to us to say ‘You know, here’s where you just come and watch movies and just hang out.’ I feel lucky. When I talk to other programmers, I get the sense that they are kind of envious of our freedom to maneuver.”

Beyond the films, there’s loads of other events to take in at True/False.

There’s the opening jubilee, which encourages one to “put your tux, robot suit, litle black dress or funkiest getup while you masquerade with the rest of the muckety-mucks” at the Missouri Theater. There’s the March March, the festival’s signature parade of costumes and fire juggling down Ninth Street (check out photos here). There’s “Campfire Stories,” where filmmakers take the stage around a fake fire at the Odd Fellows Lounge to share stories of “the scene that got away.” There’s the much-celebrated Gimme Truth! event, which solicits a bunch of short films that may or may not be nonfiction. A panel of filmmakers (this year including Heidi Ewing and Malik Bendjelloul) have to decide whether the clips are true or false. There’s even guided tours of Columbia, care of Speed Levitch (the freewheeling raconteur from Bennett Miller’s doc “The Cruise”).

And then of course, there’s the music. Before each and every screening, True/False welcomes musicians to the stage to usher in the screening.

David Wilson explained that it took a while to get that element of the festival right.

“Most musicians don’t want to be told that they are going to start playing to an empty room and then as soon as the room is full they have to stop playing,” he said. “They don’t respond well. But there’s this certain kind of musician that really handles that.”

Wilson knows that he and his colleagues’ role at True/False is to put on a show.

“It’s creating an experience that you can’t have in front of the computer or at home by yourself,” he said. “All of those aspects of it build this group experience and this shared experience. We knew from the beginning: We have to have all the filmmakers, and we have to have music before the shows.”

A college town with a population of just over 100,000, the magic of True/False would not be possible without Columbia, MO itself. From its coffee shops and restaurants to the many historic and/or innovative spaces and environments it offers the festival for its events (only one of which is typically used as a movie theater), Columbia provides a sort of ideal environment for a festival like True/False. And this is mixed with the careful approach to exhibition that Wilson, Sturtz and everyone else at True/False clearly take quite seriously. 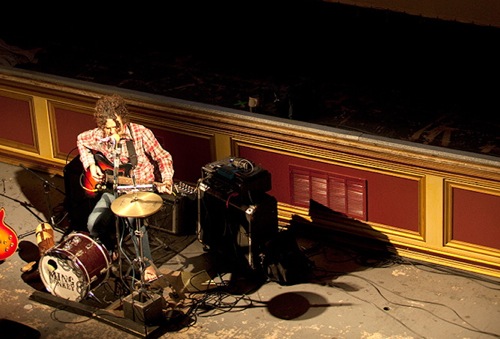 Showing in non-traditional venues is a lot of work but we also have a really high standard for presentation,” Wilson said. “I think filmmakers appreciate that. It’s not really fun as a filmmaker to walk into a room and see a postage-stamp screen and a little projector in the middle of the room. These are people that really care about their images.”

“Columbia is also filled with friendly Midwesterners keen on both offering visitors their hospitality and taking in the film festival themselves. There’s such a clear pride in the community about the festival, with hundreds of folks on the street donning True/False t-shirts and essentially every business celebrating it via big signs in their windows.

These are also the people that help make it all happen. Wilson and Sturtz work with scores of people willing to make a piece of True/False their own.

“The whole community takes pride in it,” Wilson said. “It’s really handmade. Somebody has taken care to craft every detail of the fest. The spirit of that kind of bleeds out of the fest. It’s a true community effort.”

This Article is related to: Festivals and tagged True/False Film Festival