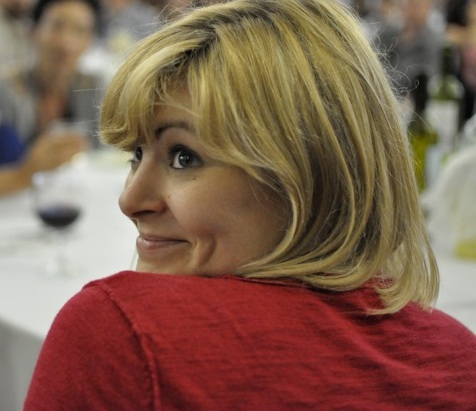 This article is part of a new column, Movie Lovers We Love, that looks at the best in entrepreneurial, impassioned and otherwise cool cinephiles and what they create — the websites, theaters, film programs and ideas we hadn’t even begun to consider. If this sounds like you or someone you know, send us a note at editors@indiewire.com.

About halfway through our conversation, Laura Major looked around her office to see what she had lying around waiting for her attention.  “I have John Ford’s home movies stacked up in my office here,” she told me.

As the Head Color Timer’s Assistant at Colorlab in Silver Spring, Maryland, Major works in the prep department.  Working on color timing means using various means to improve the color and the image of film prints.

Major and the Head Timer Chris Hughes spend most of their time preserving important pieces of film history.  Before our interview, Laura had been working on a Washington University of St. Louis-funded restoration of 1986’s 14-hour PBS documentary series about the African-American Civil Rights Movement, “Eyes on the Prize,” including the filmmakers’ outtakes.

“What’s cool about this project is that the interviews and all of these things are going to be around for awhile [but] had never been around before,” Major said. “I like the idea that these documents are recorded for posterity’s sake.  Seeing it on 16mm is different; prior to now, it was always on broadcast television.”

Each project has different needs, depending on the format and condition of the work needing preservation.  Major described a typical to-do list:  “A lot of my day entails synching soundtracks, making sure things can go through printing machines, cleaning machines, organizing when things are gonna get colored or printed, doing inspections, repairs — a lot of quality control stuff.” (The process behind Colorlab’s recent preservation of much of queer underground filmmaker Jack Smith’s collection of films, including his classic “Flaming Creatures,” was detailed in an essay Major wrote for NYC repertory cinema website Screen Slate.)

Major got her start in film preservation when she was at the University of South Carolina, where the mastermind behind the Orphan Film Symposium, Dan Streible, then taught.  The Symposium provides a forum for archivists and preservationists to display recently unearthed films that were either previously thought lost or were not known to have existed in the first place.

Since graduating, Major stayed active in the community and worked for the Robert Flaherty Film Seminar, an annual celebration of documentary film named for the director of the classic documentary “Nanook of the North.”

Major speaks with great passion about her work, and said she wishes the films she works on can find their largest possible audience.  “We see these really great films that we wonder, ‘What’s gonna happen to them unless they go to Orphans or the Flaherty?’ I’ll see that something got screened somewhere, and I’ll get really excited. I try to be an advocate for exhibition.”

She emphasized the need for access. “I think it’s really important for films to be available,” she said. “It’s great to get younger audiences to see these things, to make them more available, to show the different worlds of these movies.  I think that if you can exhibit 16mm and show it to everybody in the world, that’s preferrable, of course, but DVDs will do.”

Favorite Film:
I don’t think I can narrow it down to just one, so I’ll do one from each of my favorite categories:
Fave Avant Garde/Experimental: “Print Generation,” JJ Murphy
Fave Documentary: “The Blues Accordin’ to Lightnin’ Hopkins,” Les Blank
Fave Hollywood: “The Apartment,” Billy Wilder
Fave Comedy: “Ghostbusters,” Ivan Reitman
Favorite Director:
I think overall I’d have to say Stanley Kubrick.
The Last Film I Saw:
“The Last Tango in Paris,” Bernardo Bertolucci. Quite possibly a perfect film. That being said, I think I’ll be perfectly happy if I never have to see it again.
Favorite Restoration:
For the past year or so, we’ve been working with the National Film Preservation Foundation, Ohio State University, and Walter Forsberg on several titles by computer animation pioneer, Lillian Schwartz. I had the opportunity to meet Lillian and experience her films with an audience this past summer at the Flaherty Film Seminar. When the lights came up, there was a definite electricity in the room, I think every mind in the theater was blown. It’s kind of cool to play a small part in the history of these films, but it’s really great to know that these titles will live to see another day hopefully many more audiences.

This Article is related to: Features and tagged Interviews, Movie Lovers We Love