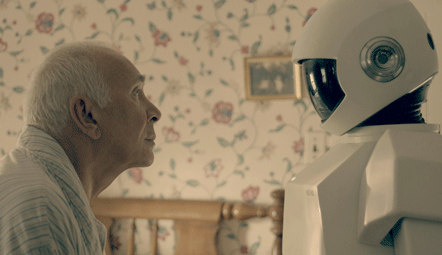 RobThe Palm Beach International Film Festival (PBIFF) is back for its 17th year in the south of Florida.

This time, the festival will open with Jake Schreier’s “Robot and Frank,” a film that received some positive reviews at Sundance in January. The story follows a elderly man (Frank Langella) whose children opt to buy him an android companion in lieu of placing him in a nursing home. One week after the festival opening “Sassy Pants,” the latest from Coley Sohn will close out the festivities. Anna Gunn, Diedrich Bader and Haley Joel Osment lead the cast of the new film that follows a teenage girl’s escape from her family and her pursuit of an education in the world of fashion.

In the intervening seven days between beginning and end, the festival will feature a full slate of films (all of which can be found at www.pbifilmfest.org) as well as nights devoted to short films, music videos and children’s author Judy Blume’s debut as a screenwriter.

A portion of the festival lineup announcement is reproduced below:

“We are excited about this year’s program,” comments PBIFF Director Randi Emerman, “which reflects our ongoing mission to engage with the community, expanding and enhancing its knowledge of the world through the unique lens of independent film.  We encourage people to take this opportunity to enjoy these diversely international stories.”

Opening Night kicks off with Robot & Frank, directed by Jake Schreier.  Set in the near future, Frank, a retired cat burglar, has two grown kids who are concerned he can no longer live alone.  They are tempted to place him in a nursing home until Frank’s son chooses a different option: against the old man’s wishes, he buys Frank a walking, talking humanoid robot programmed to improve his physical and mental health. What follows is an often hilarious and somewhat heartbreaking story about finding friends and family in the most unexpected places. Robot & Frank features an award-winning cast including Academy Award® nominee Frank Langella, James Marsden, Liv Tyler and Academy Award winner Susan Sarandon.  Robot & Frankis a Samuel Goldwyn Films and Sony Pictures Worldwide Acquisitions film.  Opening Night festivities will take place Thursday, April 12 at Muvico Parisian at CityPlace, followed by a party on the luxurious rooftop of Two City Plaza.

The fest will close with “Sassy Pants,” directed by Coley Sohn and starring Anna Gunn, Ashley Rickards, Diedrich Bader and Haley Joel Osment.  Bethany Pruitt (Ashley Rickards) is valedictorian of her one-student home-school class. Stuck with younger brother Shayne (Martin Spanjers) under their perky but oppressive mother June’s (Anna Gunn) thumb, Bethany’s only escape is a teen fashion ‘zine courtesy of her absentee gay dad.  Life at dad Dale’s (Diedrich Bader) mobile home is no picnic either. Despite the close bond she forms with his fun, younger boyfriend, Chip (Haley Joel Osment), Dad’s self-loathing, alcoholic outbursts weigh heavy on Bethany. She finds solace selling clothes at a cheap, trendy retail chain Jail Bait, but her petty, cutthroat coworkers cause a new set of “real world” navigation problems. When Bethany learns about Fashion Art Technology Institute, aka F.A.T.I., she sees a chance to break free once and for all and forge her own brighter future. How she gets there will redefine her and her family and maybe even update her wardrobe. Closing night will take place at Cobb Theatres in Palm Beach Gardens on Thursday, April 19, followed by a party at Downtown at The Gardens.

Additional highlights of this year’s PBIFF include:

·       The ever-popular Weekend of Shorts at the Lakeworth Playhouse (Fri-Sun), as well as the Voices of Local Films which will screen at Mizner Park Cultural Arts Centre on Sunday, April 15

·       Sunday night, April 15, the festival will present an evening of music videos along with a reception at the famed DeBilzan Gallery in Delray Beach.

·       On Sunday, April 15, at 5pm at the Mizner Park Cultural Arts Centre, there will be a Special Presentation of Violins in Wartime, featuring a performance by legendary violinist, Ida Haendel.

·       On Monday, April 16, PBIFF will present the World Premiere of Tiger Eyes, the first of iconic author Judy Blume’s novels to be brought to the big screen, directed by none other than her son, Lawrence Blume.  Both director and the renowned author are attending.

Screenings of this year’s films will be held at Muvico Parisian 20 at CityPlace in West Palm Beach,Cobb Theatres in Downtown At The Gardens, Lake Worth Playhouse in Lake Worth, Debilzan Gallery in Delray Beachand Mizner Park Cultural Arts Centre in Boca Raton.

The Palm Beach International Film Festival is a 501(c)(3) not for profit organization supporting film programs in local schools and dedicated to making a difference in the lives of future filmmakers by helping them fulfill their dreams to one-day work in the world of film. For more information, please call (561) 362-0003 or visit the festival web site at www.pbifilmfest.org.

This Article is related to: Festivals and tagged Festivals, News