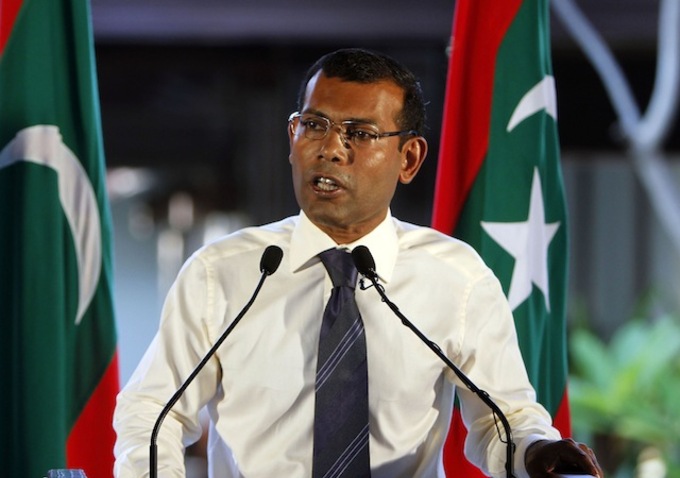 Jon Shenk’s profile of Mohamed Nasheed, the first democratically elected leader of the Republic of Maldives, “The Island President,” opens today at New York’s Film Forum, following a surge of press after Nasheed was forced to leave office following a coup d’etat by loyalists to his predecessor, dictator Maumoon Abdul Gayoom.

Made before the tumultuous events of the past several weeks (he resigned February 7), “The Island President” follows Nasheed’s quest as President to make his country (the lowest nation in the world, and therefore vulnerable to rising sea levels) the first to go carbon-neutral. Shenk, who also served as the film’s cinematographer, tracks Nasheed’s first year in office, leading up to the U.N. Climate Change Conference in Copenhagen in December 2009.

Indiewire caught up with Shenk in New York to discuss the making of “The Island President,” whether he saw this dispiriting turn of events coming and why he didn’t go back to shoot more following Nasheed’s resignation.

How and when did you first become aware of Nasheed’s efforts?

I read about Mohamed in October of 2008 when he won the first ever Democratic election for President in the Maldives. He just kind of jumped off the page at me because he was the first Democratic leader of a nation that was 100% Muslim, which at the time in ’08 was very unusual. He stepped into office and immediately started saying these provocative and profoundly honest things about the environment.

I started following the story on the internet. Then in early ’09, he made this commitment to make the Maldives carbon neutral. I thought, man this is just awesome. He was doing something for me, which I thought could come across in a film — he was making climate change about people, about the human struggle. I thought, wait a minute, climate’s been dealt with in films, but it always feel like a kind of medicine we need to take. There was a deadness about it.

In fact when we went for funding, several broadcasters said, “Oh, we can’t do another film about climate change.”

So I wanted to make a film about a person overcoming this task. In pitching to Nasheed, we realized we were asking for something insane: for the State to give a documentary crew access to his life and his world. To his credit, he’s such a champion of transparency and good governance. He basically said let’s do it.

I think at the time he didn’t quite know what we needed (laughs).

You spent a full year and a half with him, correct?

We filmed for a year and ahalf, but we weren’t there for the whole time, as much as I would haved loved to move to the Maldives. We did five trips. It was just a thrill. It’s beautiful to get to know a country by getting to know its fledging democracy movement. It felt like you were watching history unfold before your eyes.

And also, to travel with Nasheed to these international climate meetings almost felt like being inside a James Bond movie. It’s very intriguing to hear, “The meeting with China’s set up. How are we going to play that?” It’s almost like “The West Wing.” You don’t get to see that in truth because it’s so delicate. But here was an opportunity to actually see the reality of it.

Your film doesn’t give the sense that Nasheed was under this intense scrutiny and pressure following his victory. Were you surprised by the news of his forced resignation, or had you seen it coming having been with him for that long?

That’s a great question. I kind of feel two ways about it. On one hand, we felt the shadow of the dictator.

Oh, yeah. When we first went there and we would meet out Maldivian contacts to talk about things that we wanted to film, often times we would ask questions and our answers would come in the form of whispers. The reason for that is that Gayoom, the dictator, had ruled with an iron fist. He used fear. People were scared that they could be arrested. They felt that Nasheed was an inspiring new hero for their country, but they also weren’t confident that it would last. They had grown up in a country where there was one president for their entire lives. How could this young guy hold onto power after all that?

I always thought, gosh, why are you being so careful? Let’s talk more openly. But in hindsight they were right to be scared. The police force still had a lot of people working fo Gayoom. They were loyalists to the dictator, probably because they were on the payroll of his supporters. Same with the military. The judiciary had never properly been reformed. Most of the judges in the Maldives were still appointees of the dictator. So you can imagine what Nasheed was up against.

In the United States when Obama was elected, there was a sense that the Republican party just shut down Obama. Whether you were a Democrat or a Republican, you felt that struggle. You were either trying to shut Obama down, or you wanted him to step out and be more powerful. That was kind of multifold in the Maldives. You really felt that this opposition was going to do everything it could to undermine this guy. He had a huge task ahead of him. He had to modernize an economy. He had to root out corruption. You can imagine there were a lot of people that were upset by what he was doing. So in that sense, it doesn’t surprise me that they ultimately were able to create this coup that unseated him.

Also Nasheed has pivoted and he’s back on the streets working the same channels that he worked. He lost this chess move, but I’m not so sure he’ll lose in the end.

The genie is out of the bottle there. People, they went from having one state-run television station, now they have five. They went from one newspaper to dozens. Once people have that freedom and they’ve tasted what good governance is about, it’s kind of hard to put that back in. Not to say that can’t be done with guns and brute force, but Nashiid has communicated to me when I talked to him, that he has some hope that in way that there’s more support for democracy that there ever has been.

What do you say to people who believe Nasheed resigned too easily?

I think a lot of it is ignorance. People don’t know what happened because they haven’t sunk their teeth into it. God knows that there are a million stories all the time vying for our attention. But if you spend an hour looking at reports and good journalism that’s been done in the Maldives, you will not walk away thinking anything other than, this was a coup! There was money from the outside that was paying off police to mutiny; Nasheed resigned essentially under the threat that there would be a bloodbath if he didn’t. In fact, there was a great report that a news organization in Australia did where they one of the guys who organized the coup to admit that on camera. He proudly says, “There is going to be a new President tomorrow. Either it’s going to happen peacefully, or it’s not going to happen peacefully.”

In many ways, I think Nasheed did the right thing. Ultimately would have it been better if he had somehow managed to tip off that he was doing it under duress? The way it came across in those first couple hours was unfortunately smooth. He read a statement that said, “I’m resigning.” So it seemed like it had the gloss of a real transfer of power. Almost immediately, if you started reading the inside story, you learn that he essentially had a gun to his head. Nasheed is not the kind of guy who is going to let his staff, supporters, the people on the streets, go through what they were threatening. 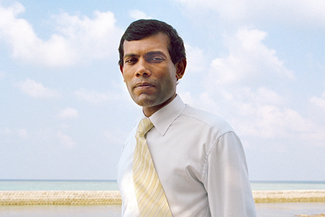 This begs the question, given that the film’s coming out now, why didn’t you choose to go back and document the latest developments?

That’s a great question. Of course when you’re making a film about a current event and something happens, there’s an insecure part that goes, maybe we should change the film. But at the end of the day, the film is the film. It’s an incredible story. It captures his first year in office. In some ways it’s more precious now. In some ways, it’s like wow, the pursuit of good in the world is really difficult. The people who fight that fight are doing so on risky terms. I think that what’s going on right now is very dramatic. It could make for an incredible film one day.

But I think “The Island President” is a film about a guy who suddenly became president after years of fighting for democracy. He woke up and he realized the natural extension of that was the fight for human rights on a global scale.

One wishes that we had leaders all over the world who were that committed and that energetic to the cause.

This Article is related to: Features and tagged Interviews, The Island President