SXSW Review Capsule: 'Somebody Up There Likes Me' 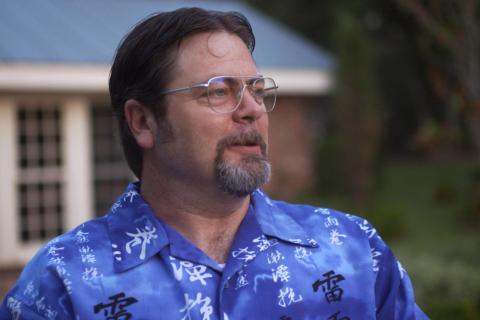 For a screenwriter, dealing with the aging process in any nonlinear fashion is always a risk. Toying with the natural progression of youth into old age has the potential to come off as manipulative or cheap. Yet that’s the task that writer/director Bob Byington assumes with “Somebody Up There Likes Me.”

Even though the film’s action spans decades, the central characters that revolve around Max (Keith Poulson) never age, maintaining their appearance throughout the film. The ones that surround him, including his beloved Lyla (Jess Weixler) and his friend Sal (the always-dependable Nick Offerman) follow Max through his efforts to build both a family and a food-service business.

Writing at Austin 360, Matthew Odam concedes that Byington’s methods are not for everyone. There are points throughout the narrative where the push and pull between art and beholder are most apparent. “At times [it] almost feels like Byington is baiting the audience,” Odam writes. But he also contends that whatever apprehensions audiences may have about the storytelling methods are overturned by the central performances. “The film moves at a languid pace, made palatable by the breaking of the stories into vignettes,” he says, “and the amazingly tempered yet heartfelt performances from the three leads fit the mood perfectly.”

Others, including The Film Stage’s John Fink, argue that Byington’s style in “Somebody Up There Likes Me” is so honed that it transcends the unconventional tone with which it’s delivered. Fink writes that “Byington is fully in control and has crafted the most detached comedy of the year thus far. In some ways he is able to achieve a spot-on truth.”

At the Playlist, William Goss describes how the film’s success is a synthesis of vision and actualization. When analyzing the periodic shifts forward in time, he says that “the pervasive passivity of these long-spanning interactions falls right in line with the droll-but-not-twee tone of Byington’s screenplay and direction. Each scene is a brisk vignette of deadpan reversal, often involving a running theme of miscommunication.” Quick to praise the actors for their interpretation, he adds, “It would all be for naught if mainstays Poulson, Weixler and Offerman didn’t ease viewers into the quietly odd realm of the film.”

Eric Kohn gives the film a flat-out Indiewire A, echoing all the film’s major achievements. “The movie proceeds…with smarmy rapid-fire dialogue that would make Preston Sturges dizzy. Byington’s droll sense of humor holds the speedy pace together, but the structural trickery never feels erratic,” he raves. “In the hands of another filmmaker, Byington’s approach might come across as gimmicky or overly precious. Instead, ‘Somebody Up There Likes Me’ retains a playfully philosophical edge.”

“Somebody Up There Likes Me (and Someone Behind Us Won’t Shut Up): charmingly deadpan, surprisingly ambitious look at life and love.” – William Goss, Film.com

“Somebody Up There Likes Me: Expecting a sale soon. Nick Offerman fans will be in heaven. Byington’s quirks at their most accessible/amusing.” – Stephen Saito, The Movable Fest

“SOMEBODY UP THERE LIKES ME has scattered big laughs but need to see again to see if the douchy doucheness of lead is more tolerable.” – Erik Childress, eFilmCritic.com

“SOMEBODY UP THERE LIKES ME: Bob Byington’s THE MONOCHROME WHEEL, sorta. Downbeat but snarky, mildly eccentric, tauter than HARMONY & ME.” – Aaron Hillis, GreenCine Daily

This Article is related to: News and tagged Review Capsules, Somebody Up There Likes Me, South By Southwest Film Conference and Festival (SXSW)