The Mysterious Marketing of 'Mad Men' 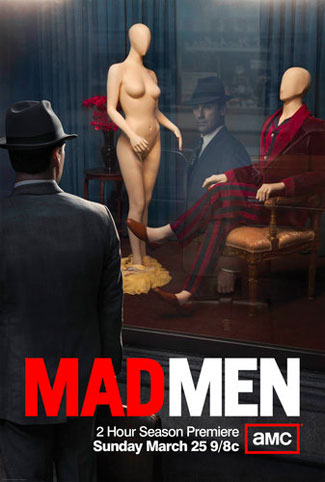 It’s not every marketing campaign that gets pored over like it’s the Voynich manuscript. But “Mad Men” creator Matthew Weiner is so notoriously tight-lipped when it comes to advance details about the series, which kicks off its fifth season with a March 25th two-hour premiere, any official release — even a poster — merits a close read. The show’s been off the air for a year and a half, and there’s plenty of eagerness to find out what’s to come (and surely just as much on the part of AMC to see how many viewers return to their flagship property after such an long absence).

The strikingly minimalist ads featuring the falling man of the opening credits against a white background had unpleasant evocations of 9/11 for some, but the new art offers the more enigmatic scene of Jon Hamm as Don Draper gazing into a store window in which an unclothed female mannequin stands next to a reclining male one wearing pajamas. Weiner, talking to the New York Times, helpfully(?) explained that even if you think you know what this scenario means, you totally don’t: “This is a dreamlike image… a nonverbal representation of where my head is at and where the show will be. By the end of the season, I guarantee you’ll know what it is about.”

That hasn’t stopped writers from offering up their speculations. “I imagine the shop window is representing for Don something he’s now lost– he’s standing on the outside, on a not-so-posh city street as reflected in the window, and watching a familiar scene of seduction,” theorized Katey Rich at Cinema Blend. “Does that mean it’s about Don’s damaged ideas about femininity and parterning, and how he likes to use advertising (in this case, a display window) as a projection of his fantasies, and how the show uses said projections to explore the male gaze and the damage it can wreak? Probably!” offered Margaret Lyons at Vulture. “Or could this department store merely be a new Sterling Cooper Draper Pryce client?” mused Joyce Eng at TV Guide.

How to market a show without revealing any pertinent details about it ahead of time is a challenge worthy of Draper himself, and creates odd feedback loops like the featurette below, which purports to offer a “look at season five” while cobbling together old footage and having the cast offer up some tortuously vague soundbites — according to Vincent Kartheiser, “This is an amazing season. I love the scripts this season probably more than any season.”

Until March 25th, I’m choosing to run with my theory based on Weiner’s comments on how he plans to end the show and presume that this season and the two to follow will all take place in the present day, where an 80-something Draper struggles with cigarette-induced pulmonary illness and muses about the past while waiting for Sally to visit — wouldn’t that be a development worthy of all the secrecy?

This Article is related to: Television and tagged Mad Men, Matthew Weiner, Television