Armando Iannucci on 'Veep,' Politics and the Inherent Funniness of Being Vice President 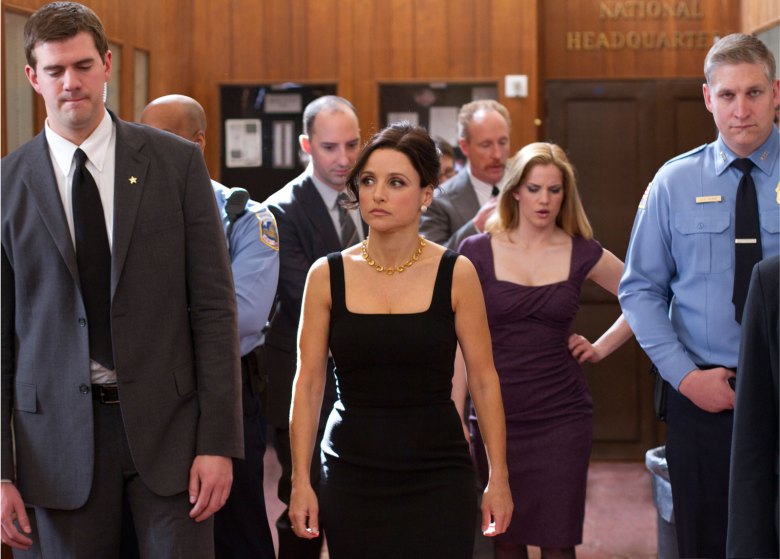 When it comes to satirical targets, Scottish writer, director and comedian Armando Iannucci has been gradually moving his sights up the political food chain. His ongoing BBC comedy “The Thick of It” focuses on the administrative and media mishaps of the fictitious Department of Social Affairs and Citizenship, while his 2009 film debut “In the Loop” followed how a semantic fumble by a UK politician (played with befuddled cluelessness by Tom Hollander) in a radio interview leads to different U.S. State Department officials trying to use him as a pawn in the ramp up to a war.

“Veep,” Iannucci’s new HBO series (premiering this Sunday at 10pm), keeps the same look and loose feel of those earlier works while looking higher still on the org chart — to the office of the vice president, a position the show highlights as both essential and, unless misfortune dictates otherwise, vaguely irrelevant. Played by Julia Louis-Dreyfus, Vice President Selina Meyer spends her days navigating the minor catastrophes that always seem to get in the way of her attempts to achieve something significant — a tweet about her green initiative to introduce cornstarch utensils to federal buildings, for instance, angers the plastics industry, and because of that suddenly no one will meet with her about fillibuster reform. Her staff, played by “In the Loop” alum Anna Chlumsky, Tony Hale, Matt Walsh, Reid Scott and Sufe Bradshaw, struggle to keep up while each pursuing agendas of their own. 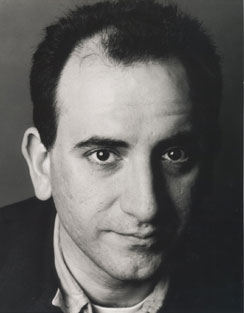 It’s a damning look at political process that still reserves a sense of warmth for its characters, who may be ridiculous but who are also deeply committed to at least trying to get things done. We caught up with Iannucci by phone the day after the show’s premiere in Washington, D.C., where, he says, it went over much better than he expected.

What is it about the office of vice president that seemed a good fit for a show?

We looked at other things first. Should it be a governor? A congressman? A statesman? Each of those is limited in a certain way. Then I thought about vice president, because there’s something inherently comic about the tension in that role. You can be so close to power, yet so far removed from it. You may have won power for yourself in the Senate and think you’re taking a step up, but then you realize you’re actually slightly peripheral. The power that you do have is the power that’s given to you by the president.

The president is the one deciding what your responsibilities are. If you’re very close ot the president, then that’s good. But if that relationship is bad or becomes damaged, then you lose that power. At the same time, circumstances could change in an instant and you could become the most powerful person in the country. Also, making [Selina] a former senator allowed us to have a go-between between the White House and The Hill, to look at those to aspects of government as well.

The show makes it clear how little interaction Selina has with the president on a day-to-day basis. Will we ever actually see him on screen?

We make a point to never say which party she’s in, to never name the president or any current politicians. I don’t want people to decide that this a Democrat vice president or a Republican one. I think if we saw the president then there would be questions like that which we would start asking ourselves. Its about her and her sense of proximity to, yet isolation from, the heart of government. So who knows? But when she does meet the president, it’s not in one of the episodes.

How did you approach the character as a female? Obviously, Sarah Palin casts a bit of a shadow there, but Selina’s gender doesn’t seem to have much of an effect on her role other than when she gets into a tiff with the first lady over a stylist.

We made her a woman because I wanted this to be a take on how politics might be with another three years, rather than having people think this is a take on Joe Biden or something like that. So I thought — let’s make her a woman, but let’s not have the show be about being a woman in D.C. Having said that, because she is a woman there are certain irritating things that high-profile women in politics have to face up to.

The questions they get asked by the press, like how much they spend on a stylist and why they’re wearing the same outfit two days in a row. These are not questions a male politician would be getting asked. And she’s a mother, and the press always speculate on that aspect. But one thing we didn’t want is make this about being a woman in politics. I just wanted to cast her, and then forget about it and then not be overly concerned about that.

Have the Republican primaries shaped how you’ve portrayed these characters?

Not really — we shot it last year. We finished shooting in late November.

So Selina’s line about not wanting her photo taken while eating a hot dog actually anticipates Michele Bachmann’s Iowa State Fair photo instead of referencing it?

That’s always the thing — you write something and then it happens. Or you write something profoundly absurd and then a politician will confront you afterwards and say “How did you find that out?! We thought we kept that quiet.” We do a lot of research, but never try to do an episode about something that actually happened, because it’s not a topical show. 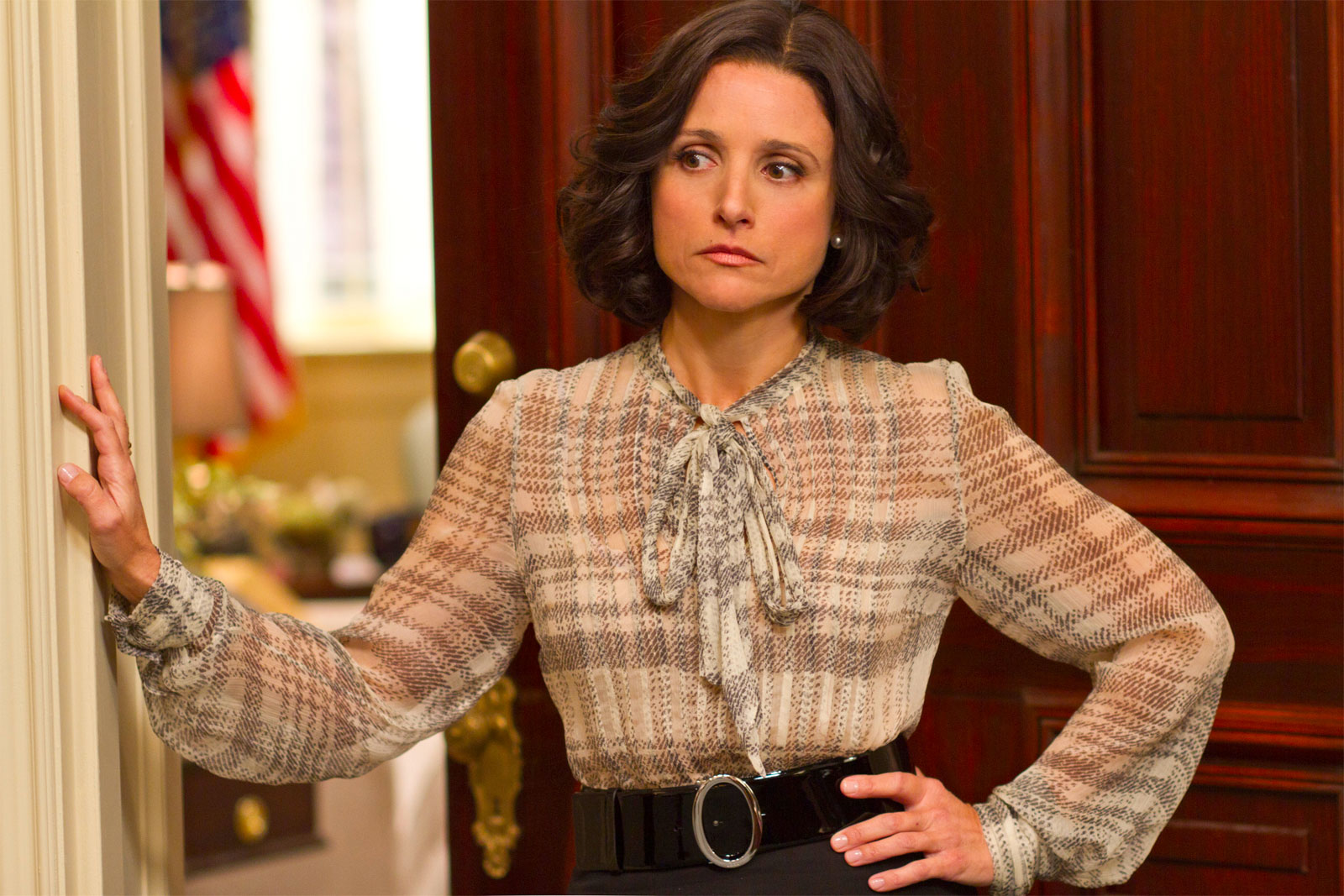 We try to take the temperature of what’s going on — like the fact that politicians are now spending more and more money to put stuff up on the internet, or the fact that anything you say can be recorded or caught on an iPhone. The series does acknowledge that and makes use of it. It’s taking snapshot of where politics is at the moment and then making storylines based on that snapshot. Inevitably, things will happen in real life that happen on the show.

The characters are always trying to fix emergencies that have arisen — like a lousy word choice or a tweet that goes wrong. The idea that they’re always trying to dig themselves out of holes rather than being able to be proactive, is that based on anything you saw when researching for the show?

Yes, it’s a 24-hour newscycle putting extra pressures on politicians. I think there are frustrations that they can’t get the real stuff done. It’s a very slow process, getting anything done. A lot of nervous energy is applied to fixing the smaller day-to-day issues. I think also because Washington is this hermetically sealed, one-industry power that there’s a lot of self-absorption and worrying over everything. And often a lot of problems are caused by people worrying about something staying small, and in the process of fixing it, they give it a higher profile and therefore just make it worse. 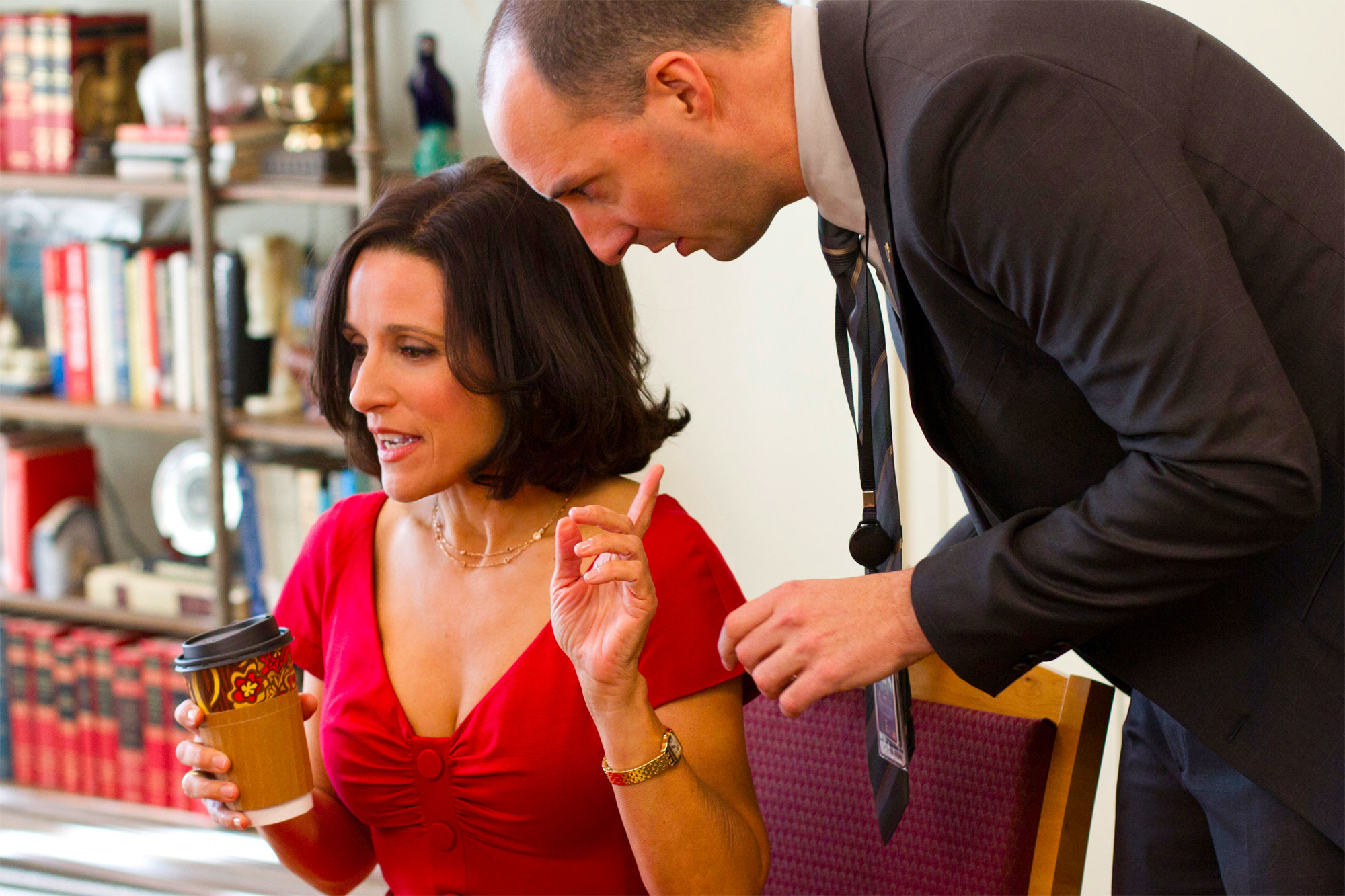 It seems like a theme that while there are large issues of national importance in the background, like green energy, everyone’s always getting tangled in issues of minutiae, like signing condolence cards or changing the names of hurricanes that haven’t yet happened.

As the show progresses, you’ll see that larger issues do come to the foreground. In episode four, Selina deals with a potential rival. In episode five, some major legislation is halted. There’s a journey taken in the whole season — we start with her, her office, her staff and the things that preoccupy her on daily basis. As the series progresses, we get a view of the wider world out there and what kind of impact she can have on it or how it affects her. We also get more insight to how it personally affects her in terms of private life, but also emotionally and what kind principles she has.

Do you see Selina as being good at her job, as being a good politician?

I think she’s steely. She tends not to panic. She feels her staff aren’t necessarily helping her as well as they could. We wanted to make sure that she had had an established career in Washington and that you could see why she was asked to be vice president. It’s not a close relationship she has with the president. It could be that he thought she could get him lots of female voters, or some East Coast states that he might not have appealed to. It’s a pragmatic relationship. Even though it’s a comedy, we didn’t want her to be a buffoon, somebody who bangs into walls and falls over. She knows her way around D.C.

In the past, you’ve shot using multiple cameras and leaving some room for improv — has that changed at all when working on “Veep”? 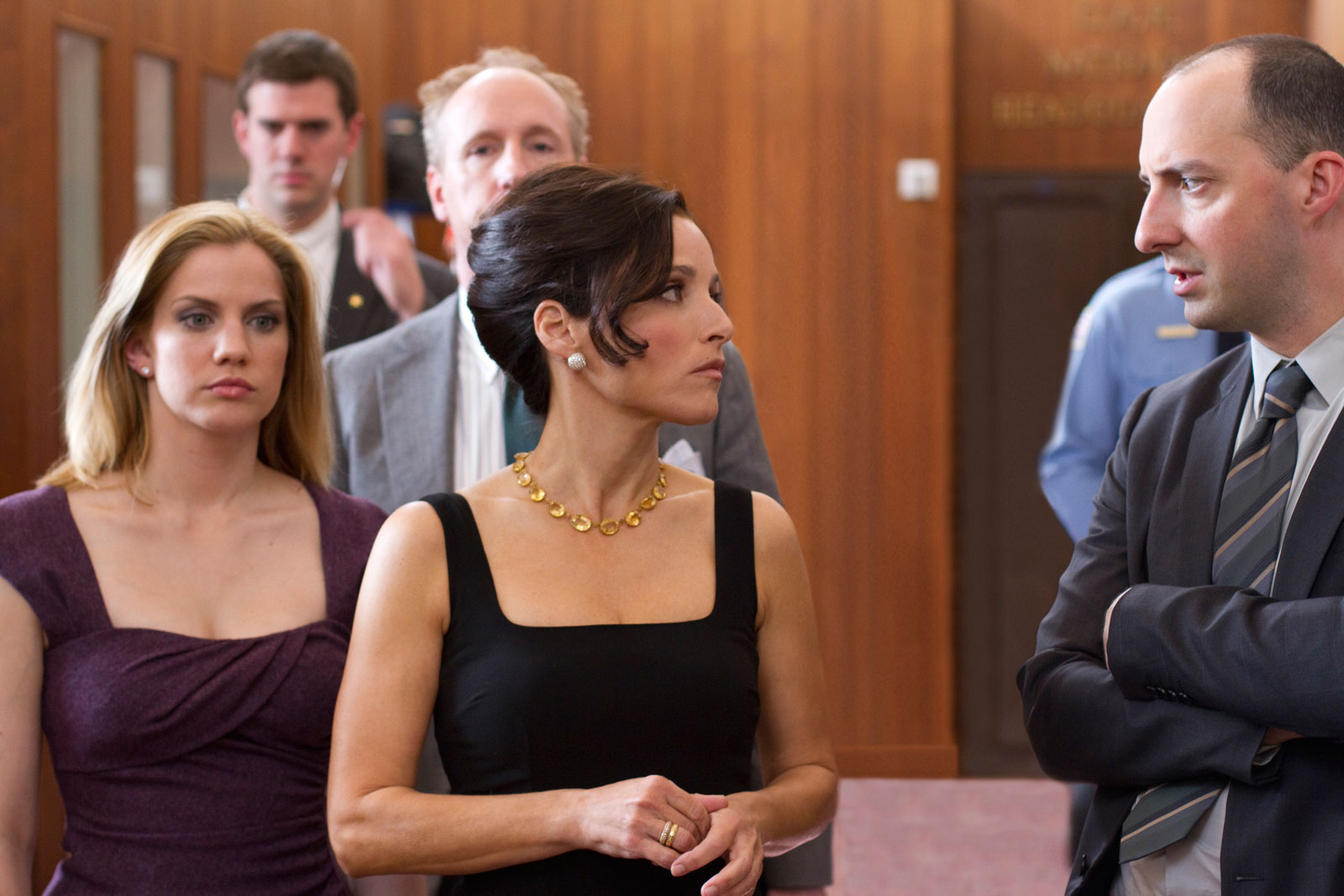 Nope, that’s how we shot it. We built a set that allowed us to have it lit all over so we didn’t need to start and stop all the time. We didn’t put marks down. We block it, we shoot the script as it’s written and then I ask the actors to loosen the lines up so they feels more conversational. People are allowed to speak over each other and not wait for clean cues.

In doing that, you actually start to capture a lot of the freneticism that does occur in these situations. When people are panicking or worried, they say strange things and react in peculiar ways. The process that I just described is all about trying to get that reaction on camera, trying to capture that sense of people genuinely making things up as they go along.

Have watched this and “In the Loop” and “The Thick of It,” I have to wonder if you feel that there’s something fundamentally self-defeating about political systems.

I think so, and it’s not that I’m cynical about politics. I hope that when you watch this stuff, that you can sympathize with the characters, that you can see that they’re human and that you can also see the absurdity of the situation we put them into — the fact the we expect them to have the right answer at any time of day or night. Also, I do feel that because of this constant scrutiny, they’ve become slightly petrified.

Politics have ground to a halt. People don’t talk to each other, people don’t explain anymore. They’re too scared mention anything, so now they define themselves by what they’re not. You get congressmen going back to their districts and saying “Vote for me because I voted against that, I stopped that from happening, I’m not that person.” I think that’s why, although people are politically hungry for information, they feel frustrated they they’re not getting that information from politics. That’s really the feeling I’ve arrived at having done this show.