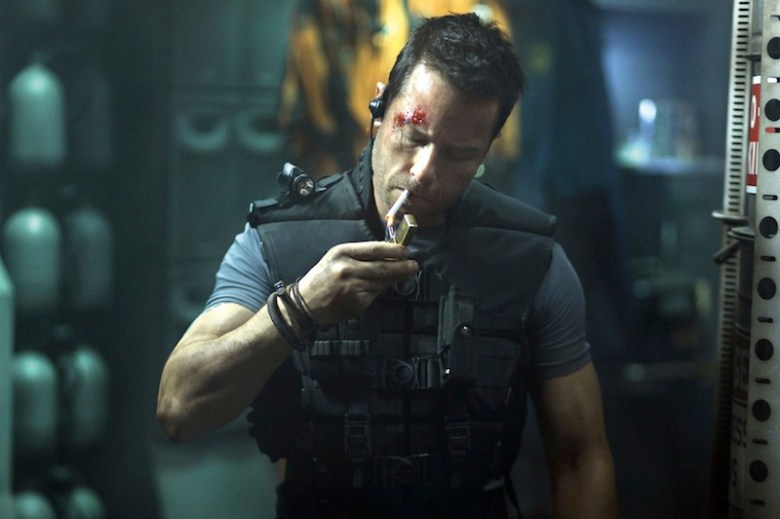 Barbed Wire is the place where Criticwire celebrates the art of the pan.  Here’s where you’ll find the roughest, toughest, funniest reviews, with easy access links to both article and author so you can follow more of their work.

Here is a movie with many names.  Its working title was “Lock-Out.” It was later announced as “MS One: Maximum Security.” It’s getting released, sans hyphen, as “Lockout.” Before that it was known by an assortment of other titles  — “Escape From New York,” “Escape from LA,” “Demolition Man” — all of which “Lockout” apparently borrows from (or homages, as the French would say, and no doubt did in this case, since French producer Luc Besson masterminded the project). It is, in other words, a knock off.  Not the “Knock Off,” of course. Jean-Claude Van Damme already claimed that title back in the ’90s.

Whatever you want to call it, two things are clear: the vast majority of critics aren’t enjoying this story of a man (Pearce) sent to a jail in outer space (Space Jail!) to rescue the President’s daughter (Maggie Grace), and their comments about what a low-rent, derivative, shameless B-movie it is only make me want to see it more.  Especially the ones about skydiving from space.  Spacediving!  From Space Jail!

“It must be said that French uber-producer Luc Besson’s ‘original idea’ credit for sci-fi action picture ‘Lockout’ is something of a misnomer given that there isn’t an original idea to be found anywhere in the film.”

“It does a splendid job of putting the pale into imitation and draining the life out of derivative.”

“Would you believe that in 2079, cops still show up to interrogation rooms holding paper cups of coffee?”

“I’m not sure that putting a maximum security prison in orbit would be the best use of tax dollars.”

“The climactic space jump ending in a drab section of urban freeway somewhere in Serbia is so spatially and rhythmically off, it’s as if the ‘Mystery Science Theater 3000’ guys paid Besson to shoot the sequence that way for heckling purposes.”

“You can skydive from a space station!”

“Underqualified actors, chintzy effects and undistinguished talent behind the scenes all point to budgetary issues and, indeed, every expense appears to have been spared on ‘Lockout.'”

“The chemically induced coma with which the bad guys threaten to punish our hero sounds more interesting than anything in this movie.”

This Article is related to: News and tagged Barbed Wire, Lockout