'Mad Men': Pete Campbell Takes One to the Chin and Another to His Pride 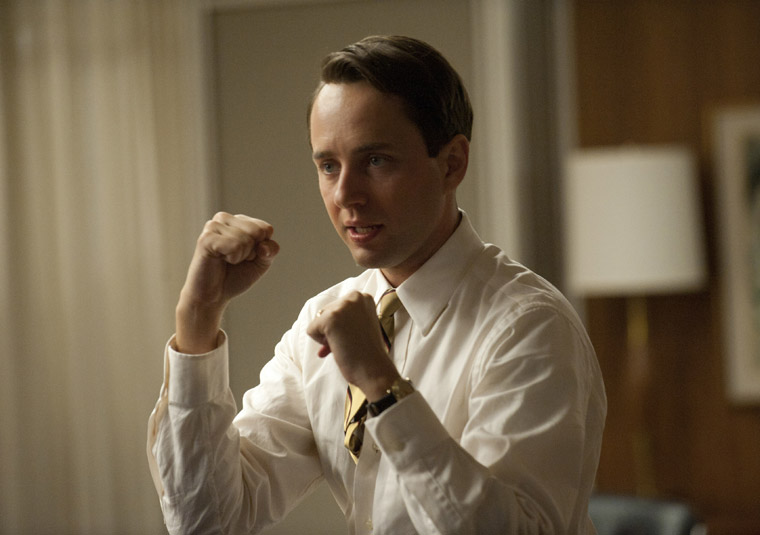 As Joan so astutely observed while patching up a bruised post-fight Lane, “Everyone in this office has wanted to do that to Pete Campbell.” And in “Signal 30,” last night’s episode of “Mad Men” (named for a 1959 driving safety film that was a precursor to the “Red Asphalt” series), someone finally did sock Pete in the face. It’s been a long time coming, though for once in Pete’s life, it wasn’t (that) deserved.

That the one who delivered the blow was Lane, seemingly the least likely of any of the men (or women) in Sterling Cooper Draper Pryce to be a physical aggressor, especially in an office setting, says more about Jared Harris’ character than Vincent Kartheiser’s. Pete’s changed a lot over the course of the show, but this episode showcased many of the things about him that have stayed the same. He still looks up to Don as a father figure he desperately wants to please, but also a rival he needs to best (after rejecting a few different approaches from the girl he’s chosen at the brothel, it’s the declaration of domance “you’re my king” that satisfies him). He still fools around behind Trudy’s back, despite the happiness they seem to have achieved. And he’s still passive-aggressive and undermining, though this time he gets called out on it and in the process is forced to confront the fact that he’s not part of some jovial office community, no matter how much headway he’s made.

While not quite friends, Lane and Pete haven’t shared a strong enmity either (as Lane points out in the “previously on” clip from last season’s “Waldorf Stories,” the two have a certain pragmatism in common). But Lane feels his professional standing and his masculinity have been eroded by his wife’s continued longing for England, by the sense that he’s useless in the office and by his general social reticence. When the opportunity to bring Jaguar on as a new client comes along thanks to his wife’s friendships, he leaps on the chance to be the one in charge of closing the deal, despite (like Don) being no account manager.

Roger’s become a ridiculous figure of fading potency from a passing era, but the tips he gives Lane about how to win someone over in a business dinner (“It’s kind of like being on a date”) show off the talents he really does possess and his unmatched skills when it comes to wooing executives. Roger even counsels relative sobriety, which is a shock coming from him: “You order a Scotch, rocks and water. You drink half of it until it turns see-through, you get another.” Lane tries to keep control of the account by claiming he and Edward from Jaguar can relate “Englishman-to-Englishman,” but the man actually has a lot more in common with the old Don Draper. Lane, who doesn’t care for football or gardening and who spent the war working as a supply assistant, can’t find a way to relate to the guy, who just wants to be taken out for wine and women. When Roger, Pete and Don oblige him, Lane rushes in scandalized, yelling about how Pete’s “corrupted” his friend. 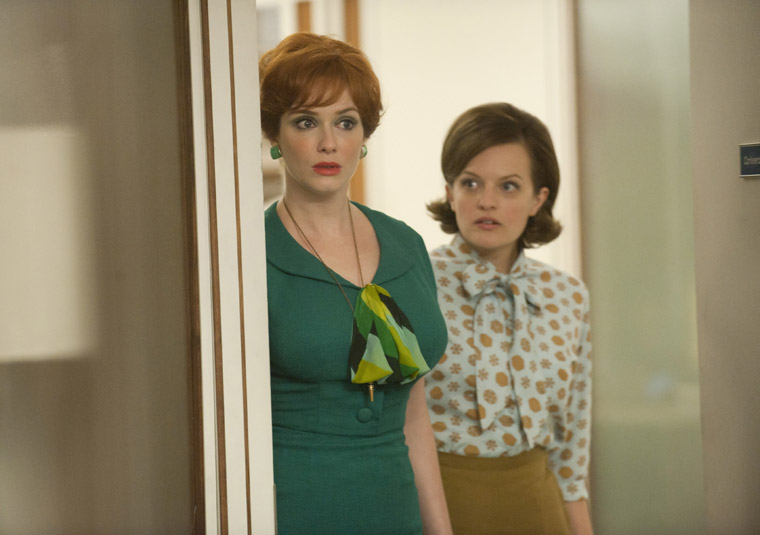 Aside from the unmitigated pleasure of seeing Pete take one on his smug little chin, “Signal 30” was a mixed bag of an episode, peppered with mild character dissonances and certain directorial choices from John Slattery (who also helmed season four’s “The Rejected”) that were awkward or on the nose — the dripping-faucet sound at the end, the match cut from Ken opening the door to leave Peggy’s office to Lane opening his own to let Roger in. Lane’s shock at what Edward had gotten up to with his coworkers felt extreme — he may not have grasped all that client entertaining can entail, but he did also indulge in some compensated company himself when hiding from the holidays with Don in “The Good News.”

Roger’s demand that Ken quit writing fiction on the side also seemed a little abrupt — back in season one, when Ken first outed himself as an author when his short story got published in the Atlantic Monthly, Roger offered him backhanded praise during a meeting, saying that the piece showed an understanding of “what most people like.” We’ve had no sense that Ken’s work at the office has been lagging, so Roger’s claim now that “your attentions are divided” came across as punitive rather than corrective. Was that problem that he’s been writing sci-fi? Someday, Roger, that stuff will rule the multiplex. 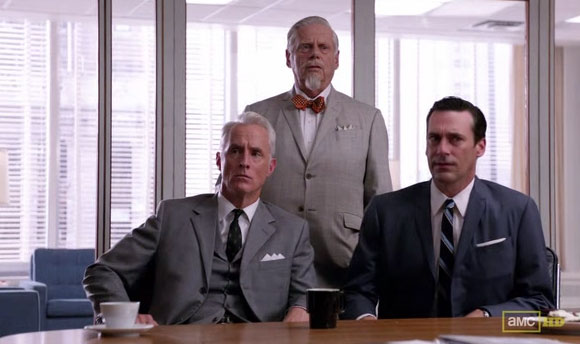 But the fight itself was wonderful and cleverly, amusingly staged. There was such a great deal of affronted dignity in the way Lane stripped off his jacket and rolled up his sleeves as he readied himself to challenge the “grimy little pimp” — if he’d been wearing gloves, he absolutely would have used one to issue a slap. And the slow horror that registered on Pete’s face as he realized that Lane wasn’t kidding and that none of his coworkers were going to step in to stop this was delightful, as were his attempts at tough guy comments (“Mr. Toad!”). But what made the sequence work so well were the fascinated visages of Roger, Burt and Don, thrilled to be observers of the impending smackdown.

Pete, like a previously bullied kid who’s found someone even lower on the totem pole to pick on, leapt at Lane assuming he was speaking with the support of the group, and misjudged and overstepped in his insults. He ends up literally separated from the pack of which he considered himself a member, separated by the conference table from the partners, who see no reason to cross over to come to his aid. They’re eager to see the fight, with Roger lighting a cigarette and commenting “I know cooler heads should prevail, but am I the only one who wants to see this?” and Don drawing the curtains for privacy. Worse than the blows to his face for Pete were those to his pride and sense of self, which is so closely tied to his work.

Battered and broken and sharing an elevator with Don at the episode’s end, his sense of betrayal is clear (if not terribly justified) — rather than see what happened as a consequence of what he said, he can only look at it as a personal abandonment. “You just cut me loose,” he says to Don, thinking that Don was casting judgment for his cheating on Trudy, and not understanding how much Don’s actually worried about his own potential to backslide into infidelity. Pete may be duplicitous, overly senstive and phony, but he’s also in much worse emotional shape than anyone around him seems to grasp, and has just been humiliated in front of the entire office — his sanctuary. What’s the future going to hold for poor Pete Campbell?