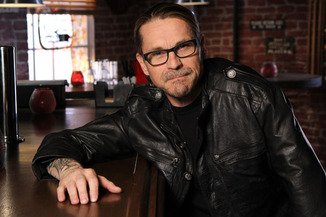 “Sons of Anarchy” creator Kurt Sutter is keeping to territory he knows well in his first foray into unscripted television. He’s the executive producer and host of the Discovery Channel’s new six-part unscripted series “Outlaw Empires,” which starts Monday, May 14 at 10pm and essentially serves as a nonfiction sidebar to his FX biker drama.

The show will explore the origins and experiences of various gangs and crime organizations, and will include interviews with members of each. Every installment will focus on a particular group — the premiere will look at the Crips, and from there the show will take on biker gangs, the Irish mob, Nuestra Familia, the Italian Mafia and the Aryan Brotherhood.

I’ve made a career writing about fictitious anti-heroes. To create these worlds, I’ve spent a lot of time with active members on both sides of the law. And if I had to pick the most interesting of the two, the choice is obvious – we all love the guys in black. This isn’t about making a judgment call on who’s good or bad. As a storyteller, I’m drawn to these personal, intimate accounts of why these men made the choices they made, and what it’s like to be a member of an outlaw organization.

In the least, the show should tide over fans jonesing for more SAMCRO goings-on until “Sons of Anarchy” returns in the fall, and give Sutter a distraction from picking fights with TV outlets on Twitter.