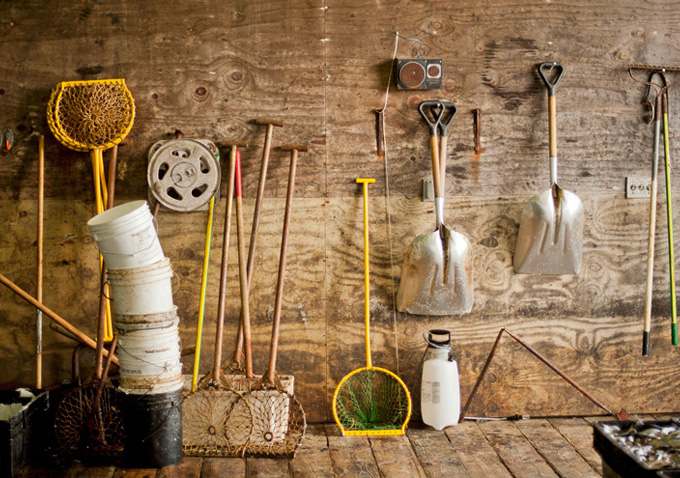 Lyricism trumps reportage in documentarians David Redmon and Ashley Sabin’s “Downeast,” an engrossing look at the politics and interpersonal dramas behind an attempt to open a lobster factory in the quaint town of Gouldsboro, Maine. The filmmakers’ last movie, “Girl Model,” explored the flaws of the international modeling business through the harrowing experiences of an underage girl; “Downeast,” while less sprawling in its scope, also effectively tackles a vast global issue through a deeply humanistic lens.

The movie opens with the closure of Gouldsboro’s Stinson Cannery, the last remaining sardine factory in the United States, a fixture of the town that had employed many of its residents for decades. Redmon and Sabid quickly establish an intense, soulful connection between the factory and its surrounding environment, rooting the massive building in a snowy landscape that appears to embrace it. The drama gradually seeps into a steady visual collage: Italian immigrant Antonio Bussone, a driven businessman, arrives in town in the hopes of launching the Live Lobster Company, the first of its kind in the country, and putting the town back to work.

On paper, Bussone’s proposal means salvation for everyone involved. But it’s here that the insular world of Gouldsboro, established so eloquently from the first scenes, comes dramatically into play: Longtime residents, led by harbormaster Dana Rice, resist the opportunity to provide the federal grant funding Bussone needs to get his factory off the ground, with little apparent justification other than town pride. “Why should we subsidize something we’re pretty near sure is gonna be a failure?” Rice says. The title refers to a sense of regional identity — and also a hindrance.

If Rice has a better justification for his opposition, “Downeast” never reveals it, but the movie flows together with such a hypnotic rhythm that it sidesteps the need for empirical arguments. Bussone’s persistence (“If I go down, I get up again,” he says) doesn’t matter as much as the overall portrayal of Gouldsboro’s troubled ecosystem, a world of old-timer fishermen and factory-owners living the only reality they know. The narrative never leaves their small community. The giant fisherman-shaped sign looming above the factory strikes a domineering figure and may as well serve as the community idol.

That grand, tragic scope fits the filmmakers’ oeuvre. Over the course of their five non-fiction features, Redmon and Sabin have demonstrated a tremendous ability to convey social problems with a straightforward véríte approach. At the same time, the duo — credited for shooting and editing their films as well as directing them — infuse most scenes with provocative imagery that transcends the specifics of the scenario. A standout moment in “Downeast” finds the stubborn Rice gazing at the framed shot of a ship on his wall, his face reflected in the glass, recalling his early days in the business. “I get accused of living in the past,” he sighs, and in truth, much of “Downeast” hovers in a state of temporal unease, emphasizing the tension between old industry values and progress. In another telling sequence, the filmmakers follow empty lobster shells from the cold, spacious factory to the garbage dump, watching the carcasses vanish in mounds of dirt while Bussone laments his financial woes in a voiceover.

There is a greater metaphor at work here. As the closing title card makes clear, more than 132,000 factories have left the U.S. since 2001, resulting in the loss of 6 million jobs. That fleeting information hints at a grander story that “Downeast” never realizes, but its formalism evades the demands of fluid argumentation. Instead, like “Girl Model,” the movie is a highly contained, personable work that renders vast industrial problems on a profoundly intimate scale — which is enough to encourage curious viewers to learn more about the context if they desire it. As “Downeast” ends on a troubling note of ambiguity about the fate of Gouldsboro’s factory and its residents, suspense hangs in the air. The future is uncertain, but one thing is clear: There’s a lot more at stake here than lobster meat.

HOW WILL IT PLAY? “Girl Model” was picked up for North American distribution by First Run Features, and “Downeast” could benefit from a similar small scale outfit able to tap into its niche material through community screenings; it also stands to greatly benefit from a digital release. Until either of those things happen, it should chart a healthy path on the festival circuit, particularly at documentary festivals.