Will You See This Movie? Laura Poitras Gives Glimpses into the Third Film in Her Terror Trilogy at a Whitney Biennial Surveillance Teach-In 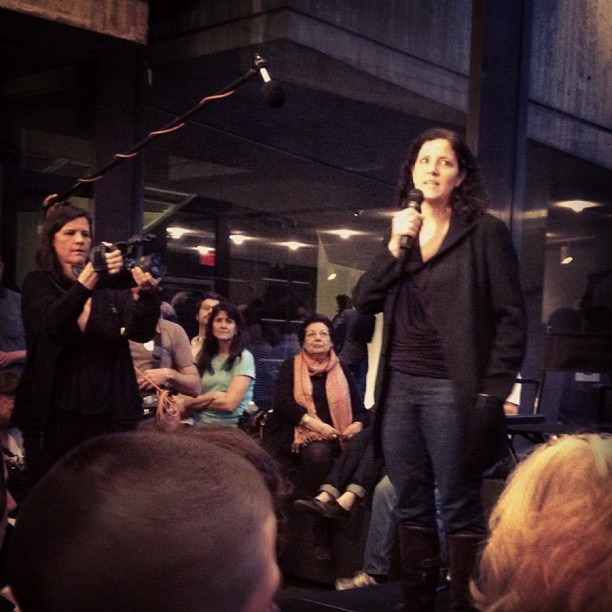 Laura Poitras, the filmmaker behind two of the most searing documentaries to cover the post-9/11 period, is currently working on the third film in her terror trilogy. Poitras has been in the news recently after Salon’s Glenn Greenwald used her case as an example of the ways that journalists and other truth-seekers are routinely intimidated by U.S. officials. After that article made waves, the documentary organization Cinema Eye released a statement in solidarity with Poitras and her brave quest for the truth.

When Poitras was invited to present her film “The Oath” as a part of the Whitney Biennial (the film will screen May 30-June 3; a conversation with Poitras and critic Dennis Lim will occur on June 2), the Whitney’s education department invited Poitras to select two people to talk about the topics at the heart of her current work.

Last Friday, after a series of surveillance-inspired interactive pieces throughout the museum performed by the group Stimulate, Poitras did just that by hosting a Surveillance Teach-In in the Lower Gallery of the Whitney Museum with National Security Agency whistleblower William Binney (who recently did a four-part interview with Democracy Now!) and security researcher and hacker Jacob Appelbaum.  Upon introducing the two, whose conversation was the main event of the night, Poitras noted that with this event and her series of films, her priority is to “change the world by getting people to care.”

Binney gained fame when he exposed the lengths to which the U.S. government is going to surveil citizens after 9/11.  At the teach-in, Binney went into great detail about the ways that the government, with the help of private security companies, is devoting scores of servers to storing all of our phone calls and emails.  The way the system works, everything is stored, but there’s far too much information for anyone to notice what non-rebels are saying or writing.  If you get placed on a troublemaker list, though, everything past and future is put under surveillance.

This process, to which a whole new NSA server facility in Utah is devoted, is the subject of Poitras’ new film.  Throughout the talk, Poitras stood by her computer, breaking the conversation up with archival clips of members of the NSA, FBI and other government institutions struggling to define their policies on surveillance of U.S. citizens. There was also new footage of Binney explaining why he decided to stop being complacent. For him, investigating foreign threats was par for the course and ethical, but violating the Fourth Amendment rights of citizens was going too far.

As Poitras’ footage and the talk exposed, the government, continuing its post-9/11 ask-about-constitutionality-later mentality, is unsure about how to approach challenges to the Fourth Amendment.

Appelbaum ended the talk by sending around a list of addresses from which AT&T manages its surveillance of cell phone user data, submitted to him anonymously. In conclusion, Appelbaum asked the audience, filled with the Occupy Wall Street crowd, old lefties, developers and hackers, to help him in doing good journalistic work and raising America’s consciousness about the ways the government is storing our information, possibly using those addresses as leads.

While it’s unclear exactly how Poitras will throw all these ideas together into a film, her track record promises that it will be an incredibly engaging and nuanced look at what is surely one of this era’s most pressing issues.

This Article is related to: Toolkit and tagged Laura Poitras, Will You See This Movie?