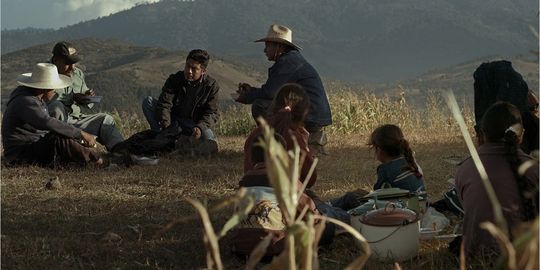 The plot of “Aqui y Alla” is so slight it barely exists. But the first feature from director Antonio Mendez Esparza balances out that limitation with a richly layered mood that steadily accumulates emotion from one scene to the next. Esparza constructs a family drama with supreme restraint while fleshing out his characters to the point where their problems take root in a fully realized environment where socio-economic conditions pull them apart. It’s incredibly uneventful and devastating all at once.

Set in the desolate Mexican mountains, “Aqui y Alla” takes a chapter-based approach to exploring the return of Pedro (Pedro de los Santos), who left his wife and teenage daughters years earlier to find work in the U.S. Seemingly back in town for good, Pedro attempts to start a band with some old acquaintances and find a professional excuse to stick around. His mission vain from the outset, “Aqui y Alla” doesn’t waste time trying to build up the possibility that Pedro could possibly succeed at this endeavor; from the earliest scenes when his children giggle at their father’s musical ambitions, it’s clear that the man is in denial.

As a result, “Aqui y Alla” takes the focus of Pedro’s mission and foregrounds the atmosphere instead, using stillness, long takes and soft-spoken exchanges to elaborate on the emptiness that surrounds him both physically and in his head. Esparza complicates Pedro’s vain endeavor with a subplot involving his older daughter’s burgeoning disdain for her family’s dysfunction. She’s looking for a reason to escape just like he’s looking for a reason to stick around.

That contradiction is reflected by the movie’s contrasting visual schemes. Dominated by green and brown hues, the scenery is often captured in wide shots to absorb the natural beauty of the mountainside and the cramped village within it. Esparza conveys the serenity of the environment from the first shot until the last, so that the setting becomes as prominent as the trim story.

While Pedro is always a desperate character, the movie foregrounds his cause with such idealism that it’s hard not to root for his cause. “Aqui y Alla” literally translates as “Here and There,” a title that relates to Pedro’s constant life on the road, but Pedro is never quite capable of figuring where he belongs in either place. Even back home, he’s a drifter.

While Esparza avoids injecting major events in the proceedings, he frequently creates the anticipation of them. When a complication involving his wife’s pregnancy lands her in the hospital, the ensuing turmoil merely serves to underscore his family’s need of his presence and the looming inevitability that he will have to leave them again during times of need. His band practice sessions are similarly aimless affairs merely demonstrating his inability to make the settled life click. No matter what happens during Pedro’s stay, “Aqui y Alla” never actually goes anywhere, but its lack of direction illustrates Pedro’s failure to find one for himself.

Esparza’s screenplay contains not a single shouting match or prolonged breakdown of his professional shortcomings. The lack of resolution allows the movie to foreground its themes, contrasting his idealism with reality in every heartbreaking moment. Never lethargic because of its poetic approach to narrative, “Aqui y Alla” benefits tremendously from constant understatement. Pedro’s most extreme reaction only arises through the hints of tears in his eyes in one fleeting shot. However, like many nuances in the movie, the slightest indication of sorrow speaks volumes about his conundrum, as well as the greater tragedy of its never-ending cycle.

HOW WILL IT PLAY? The film won the top prize at Cannes’ Critics Week sidebar, an achievement that will help it maintain visibility as it travels to other festivals sure to embrace it. Although unlikely to land much of a theatrical release, it should embolden Esparza’s reputation and generate anticipation for his next project.