How the 'Fringe' Season Finale Rewarded the Obsessives in the Audience 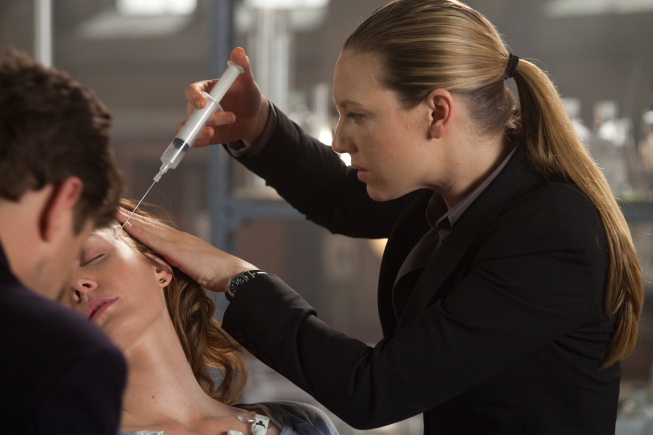 Of all the jobs in the television industry, there can’t be many more challenging than editing the “Previously on…” montage before an episode of ‘Fringe.’ In its four seasons, the most recent of which concluded on Friday, the show has built up a staggeringly complex backstory involving parallel universes, duplicate characters and alternate timelines that’s no easier to compress into a sentence than it is into 90 seconds.

Unlike its Bad Robot cousin ‘Lost,’ ‘Fringe’ began with a master plan, and (least as far as anyone knows) has stuck to it, which is to say that while there have been plenty of plot threads left dangling in its 80-odd episodes, the show’s writers have a persistent (and sometimes perverse) habit of dredging up stray details from unloved past episodes and making them central to the ongoing plot. The fourth season, which began with a “reboot” of the show’s timeline that obliterated much of what we’d come to know, served in part as a means of reintegrating episodes from the show’s first year, when it was largely a “freak of the week” procedural along the lines of “The X-Files,” into what’s since become a densely interwoven mesh of history and counter-history. 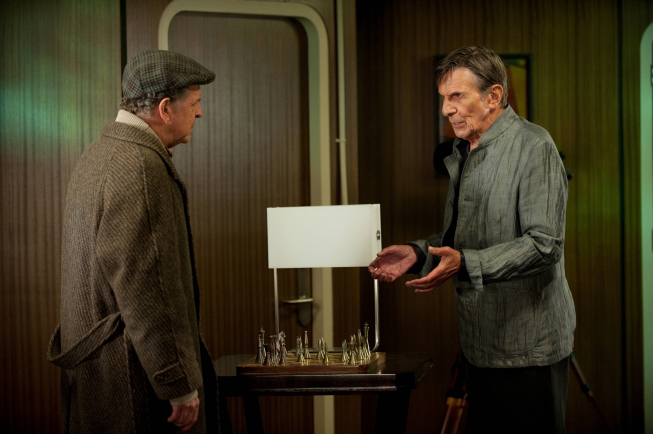 The core of the show is the investigations conducted by the F.B.I.’s Fringe Division, a makeshift offshoot that operates largely out of a basement science lab run by by the eccentric Walter Bishop (John Noble), an off-the-charts genius as unstable as he is brilliant. He comes to Fringe Division fresh out of the mental institution where he’s spent 17 years, released into the care of hyper-competent F.B.I. agent Olivia Dunham (Anna Torv), who in spite of her many talents is out of her depth trying to help an emotionally brittle lunatic adjust to life on the outside. The full-time job of caring for Walter falls to his estranged son Peter (Joshua Jackson), an equally brilliant but less dedicated man who’s put his intellect to work in a variety of quasi-legal enterprises.

The cases they investigate, from a serial killer who steals his victims’ pituitary glands to a bioterrorist whose targets choke to death on supersized influenza cells, begin to form a pattern — called, simply enough, “The Pattern” — suggesting that unknown parties are using the world as a testing ground for all manner of unscrupulous, amoral villains.

The idea that, for those of particular brilliance and sufficiently pliable morality, the world amounts to an enormous petri dish, came full circle with the fourth season’s two-part closer, “Brave New World,” in which it was revealed that Walter’s old lab partner, William Bell (Leonard Nimoy), was the mastermind behind the season-long plot to destroy our universe and replace it with another of his own construction. Since the episodes were shot with the “Fringe” renewal up in the air, “Brave New World” had to serve as a soft series finale as well as an end to the season, providing a sense of emotional resolution while leaving the show’s major mysteries unsolved. (Fox announced this week that the show will conclude with a 13-episode fifth season, giving the writers plenty of advance notice to structure a concluding story arc and taking “Fringe” to 100 episodes overall — the “magic number” that makes a show suitable for syndication.) 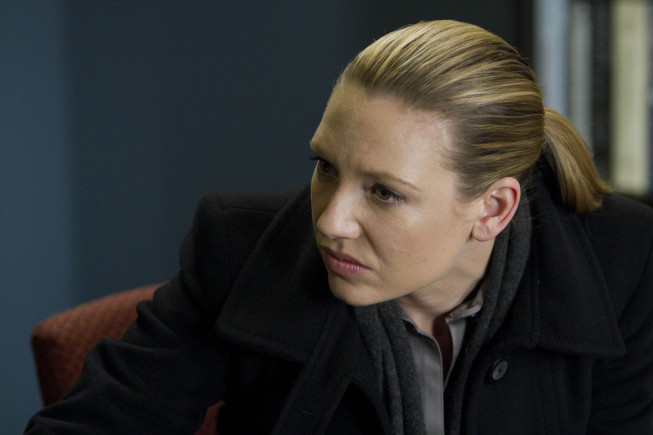 With its role in the big picture undefined, “Brave New World” was hobbled from the start, but even so it felt lumpy and haphazard, with memorable moments backed up against some of the clunkiest (and most superfluous) exposition in the show’s history. The crux of the two-parter was the revelation that the energy source William Bell was using to power his apocalyptic plan was Olivia Dunham herself.

Here’s where the “Previously…” comes in. In the first season, we discovered that Olivia had been part of a group of children who served as test subjects for a drug called Cortexiphan, whose purpose was to unlock the full power of the human brain. (The study was run, naturally, by Walter Bishop and William Bell.) While some children couldn’t handle what the drug did to them, Olivia was the perfect guinea pig, blessed-slash-cursed with a range of abilities ranging from telekinesis to the ability to move between universes. Walter himself had successfully crossed over to a parallel universe and stolen the duplicate of his dead son, Peter, but the rift between worlds created a catastrophic instability that laid waste to “the other side.”

As a tangible record of Walter’s grief-stricken transgression, Peter was uniquely qualified to put it right, which he eventually did, using a massive steampunk device to create a stable bridge between universes. In the process, he resolved the paradox responsible for his existence, and so he vanished, eventually working his way back to a world in which he never existed. (Chances are, your brain hurts right about now, so find a nice patch of blank wall to stare at, wait a few minutes, and then jump back in.) 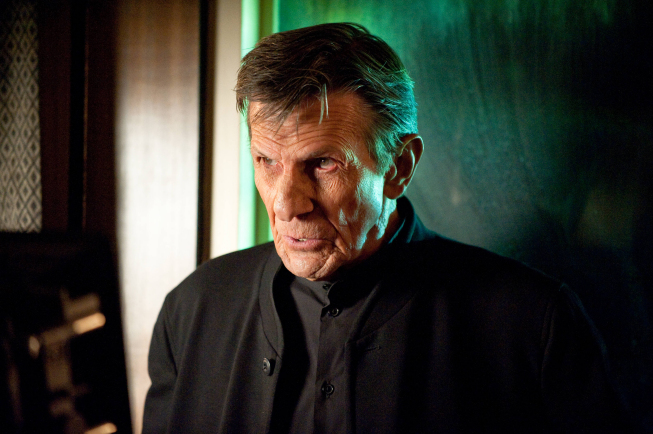 Where were we? Right. For much of the season, the role of Big Bad was filled by David Robert Jones (Jared Harris), a ruthless, grinning baddie whose high-level calculations always put him several steps ahead of his pursuers. But it turned out that Jones was merely a cat’s paw, used by William Bell and then discarded once he’d served his purpose. (Speaking practically, Harris was also a placeholder for Nimoy, who retired from acting after the show’s first season, just in case the showrunners couldn’t convince him to return.)

Nimoy seemed, frankly, somewhat out of practice, his stiff line readings failing to put across the impish glee with which William Bell toys with the world. But his unexpected appearance served as a deliberate rhyme with the end of Fringe’s first season, where Olivia first crossed between worlds and found a grinning William Bell waiting in the other side’s intact World Trade Center.

The decision to wipe the slate (mostly) clean at the fourth season’s start was an odd one, a high-stakes gamble that took a long time to pay off. With the discovery of the other side, every actor, bar Jackson, suddenly had two roles — their established character and their other-world counterpart — and it quickly became apparent that the show’s cast was capable of far more than they’d been given to that point. Torv in particular blossomed as she switched off between our world’s buttoned-down, reined-in Olivia and the other side’s copper-haired free agent (sometimes called “Fauxlivia”), whose loping posture and tight outfits revealed a level of self-assurance Torv had never had occasion to display.

The juxtaposition allowed both characters to be more sharply defined, and gave Torv the chance to demonstrate some truly impressive acting chops. Even when the characters switched places, with Fauxlivia going undercover inside our universe’s Fringe Division, the characters’ distinct body language made it easy to tell them apart. Fauxlivia survived the timeline reboot, but Olivia, at least as we’d come to know her, did not. Torv was returned to playing Olivia as she had in the first season, like a disobedient pupil sent to cover the blackboard with repeated phrases. It took the air out of the show, and although the story eventually provided a satisfying (if scientifically squishy) return to the status quo ante, even some long-term viewers had jumped ship by then.

Here’s the thing, though: At its best, “Fringe” plays the long game as well as any show of television, planting seeds that don’t sprout for weeks or months and trusting its audience to recognize when they do. Perhaps it’s not a coincidence that the montage that closed season four — and would have ended the series but for Fox’s late-breaking renewal — evoked the sequences at the end of each season of “The Wire,” another show where all the pieces matter.

“Fringe” has its incidental pleasures as well, chief among them John Noble’s titanic performance. Walter Bishop has stabilized somewhat over the years, but he’s still a borderline loon, more comfortable around corpses than most living beings. Notwithstanding dramatic (and comic) exaggeration, he’s a keenly observed portrait of genius, unraveling the mysteries of the universe in one breath, obsessing over the perfect recipe for custard the next. Even years after his release from the asylum, he’s capable of mistaking a passing tray of urine samples for an assortment of lemon Jello, and when he’s informed of his mistake, offhandedly replying, “No thank you. I’m more peckish than thirsty.”

But even the minute details of performance, or one-off moments like the scene in “Brave New World” where a reanimated corpse gets the third degree, her eyes wildly scrolling in opposite directions, are more resonant in the context of the whole. Since it became clear that the “Fringe” audience was as big as it was ever going to get, the show’s creators have been bolder about playing to the crowd, letting new arrivals find their own way in rather than constantly starting from scratch. It may have cost them some casual viewers, but the show encourages obsession, and rewards it as well.

This Article is related to: Television and tagged Fox, Fringe, Television, TV Reviews