'World Before Her,' 'Call Me Kuchu' Lead Hot Docs Winners 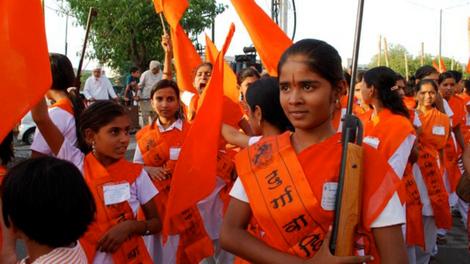 Hot Docs has announced the winners of the festival’s 2012 awards, with Nisha Pahuja’s “The World Before Her” and Malika Zouhali-Worrall and Katherine Fairfax Wright’s “Call Me Kuchu” taking top prizes in the Canadian and international categories, respectively.

The ceremony took place at the Windsor Arms Hotel in Toronto last night. Ten awards and $71,000 in cash prizes were presented to filmmakers.

The award for Best Canadian Feature was presented to THE WORLD BEFORE HER (D: Nisha Pahuja; P: Cornelia Principe, Nisha Pahuja, Ed Barreveld), a look at the clash between modernity and tradition faced by young women in India. Sponsored by the Documentary Organization of Canada, the award includes a $10,000 prize courtesy of Hot Docs.

“For its brave and provocative exploration of the role of women at its two extremes in contemporary Indian society, the jury recognizes the exceptional storytelling of THE WORLD BEFORE HER,” the jury said.

The Special Jury Prize – Canadian Feature was presented to PEACE OUT (D: Charles Wilkinson; P: Tina Schliessler), which explores the high costs of energy development in Canada’s pristine Peace River. Sponsored by the Directors Guild of Canada and the DGC-Ontario, the award includes a $5000 prize courtesy of Hot Docs.

The jury stated: “For its intelligent treatment of the environmental debate around the Peace River, an urgent Canadian issue with global implications, the jury recognizes PEACE OUT as a necessary call to arms.”

New this year, the Inspirit Foundation Pluralism Prize was awarded to a film in the Canadian Spectrum program that presents an accessible perspective (or perspectives) of one or more belief systems in such a way as to contribute to the development of mutual understanding, respect and inclusion among young people in society. Selected and presented by the Inspirit Foundation, the inaugural prize was awarded to THE BOXING GIRLS OF KABUL (D: Ariel J. Nasr; P: Annette Clark), the story of a courageous group of young Afghan women who risk persecution to become world-class boxers, training in a stadium where the Taliban once executed women. The award comes with a $10,000 prize courtesy of the Inspirit Foundation.

The award for Best International Feature was presented to CALL ME KUCHU (D: Malika Zouhali-Worrall, Katherine Fairfax Wright; P: Malika Zouhali-Worrall; USA), which looks at the formidable efforts of Ugandan activist David Kato to fight his country’s Anti-Homosexuality Bill and liberate his fellow LGBT citizens. Sponsored by A&E, the award includes a $10,000 prize courtesy of Hot Docs. Jury statement: “CALL ME KUCHU explains a great injustice with life-and-death consequences and accomplishes the rare achievement of showing both the human tragedies and the triumphs of the struggle. Combining directorial intent with the prescience and persistence that enables a documentary’s crew to be in an important place at an important time, we the Jury recognize CALL ME KUCHU for its wrenching yet inspiring depiction of people trying to succeed as humans and as activists in the face of hatred.” CALL ME KUCHU will screen again on Saturday, May 5, at 9:00 p.m. at the Isabel Bader Theatre (93 Charles Street West) and on Sunday, May 6, at 6:00 p.m. at the Bloor Hot Docs Cinema (506 Bloor Street West).

The Special Jury Prize – International Feature was presented to THE LAW IN THESE PARTS (D: Ra’anan Alexandrowicz; P: Liran Atzmor, B.Z. Goldberg; Israel), in which the legal minds who worked in the Occupied Territories in the Gaza Strip speak candidly about creating a framework that has had a profound global impact. Sponsored by the Ontario Media Development Corporation, the award includes a $5000 prize courtesy of Hot Docs.

The jury explained: “We the Jury recognize THE LAW IN THESE PARTS for its brilliance and simplicity, turning the issues of history in Israel and the Palestinian Territories into a broader and more direct question: How precisely do civilized democracies process legally and morally complex actions in the name of survival? Viewing legislation through the lens of the people who enacted it long ago with a modern and forward-looking sense of filmmaking as art, THE LAW IN THESE PARTS reveals the fragile nature of international law in contemporary conflict.”

“We the Jury recognize these films because they have an indelible sense of place while speaking to universal concerns of community,” the jury said. “We also recognize these films as they represent a superb combination of both the constructed and the found. While each film shows us places we think we know, whether New Orleans or Pretoria, both use the tools and craft of non-fiction storytelling to give the viewer different perspectives and new insights. The Jury awards these prizes in recognition of the merits of these films, but also to note how strongly and sincerely we look forward to the future works from these filmmakers as they continue to push the medium forward.”

The award for Best Mid-Length Documentary was presented to MY THAI BRIDE (D/P: David Tucker; Australia), the story of a Welshman’s complicated marriage to an attractive younger Thai woman. Sponsored by Canada Council for the Arts, the award includes a $3000 prize courtesy of Hot Docs.

Jury statement: “MY THAI BRIDE is a film that takes the story of an unlikely couple and through subtle analysis extends their human dramas into a moving examination of political, cultural and economic power dynamics. It is a film that destabilizes its viewer’s empathy through a nuanced and even-handed portrayal of charged, contradictory terrain, and reframes who exactly is the conqueror and conquered.”

“In just seven minutes this film creates a poetry of contraction between its stunning black and white imagery and grandiose music, to illustrate how cycles of violence persist and are imprinted upon the faces of Finnish women,” the jury said.

The Hot Docs Board of Directors acknowledged Michel Brault as the recipient of the 2012 Hot Docs Outstanding Achievement Award, which was presented to the influential Canadian filmmaker at an event earlier in the day.

The Lindalee Tracey Award, which honours “an emerging Canadian filmmaker with a passionate point of view, a strong sense of social justice and a sense of humour,” was presented to Halifax filmmaker Jasmine Oore. As part of the award, the winner will receive a $5000 cash prize from the Lindalee Fund and $5000 in equipment rental donated by SIM Video International.

The 2012 awards for films in competition were determined by three juries.

This Article is related to: Festivals and tagged Hot Docs