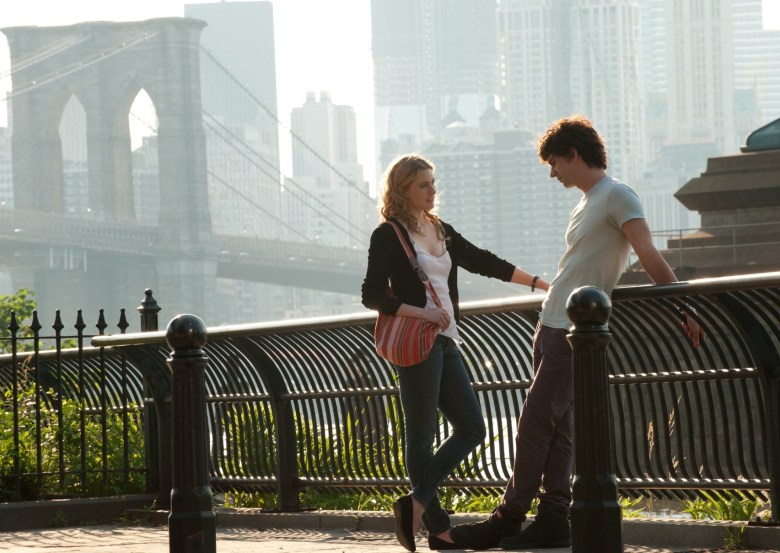 NOTE: Some of the math in the original version of this article was incorrect.  ALSO NOTE: I am terrible at math.

Its tagline reads: “Lola Versus Sex, Love, Lola Versus the World.” To which we can now add one more opponent:

Over the weekend, the creators of “Lola Versus” sent out an email to their mailing list, later posted on Twitter by Film.com’s Eric D. Snider, blaming the film’s poor box office performance (an estimated $34,000 at four theaters) on the negativity of male critics. The email is signed by “The Breaking Upwards Team” — which I assume is the film’s director/co-writer Daryl Wein and actor/co-writer Zoe Lister Jones. Here’s an excerpt from the full text:

“Our new movie with Fox Searchlight, ‘Lola Versus,’ just opened in theaters in NY and LA. The male critics are attacking the film and our box office really struggled last night. We think this has a lot to do with it being a female driven comedy about a single woman, and the older male critics don’t like messy unapologetic stories with women at the center. There was a similar backlash against HBO’s ‘Girls’ at first from men, but we don’t have the luxury of a full TV season to change their minds.”

The filmmakers allege that male critics — and specifically older male critics — don’t like the film because they don’t like any films that involve “messy unapologetic stories with women.” It’s almost a complete inversion of the discussion around “The Hunger Games” and female critics, when blogger Jeffrey Wells informed his readers to “be wary” of positive reviews written by women because he believed they were “more susceptible to the lore” of the franchise. In that case, math proved Wells incorrect: a nearly identical percentage of critics from both genders liked “The Hunger Games.” So what about “Lola Versus?” Have male critics been giving it an especially hard time?

One of the reviews written by a woman, Betsy Sharkey of The Los Angeles Times, is listed on Rotten Tomatoes as positive, but it reads, at least to my eye, as mixed-to-negative (Last line: “[Wein] creates a movie that, like Gerwig, is lovely to look at — which is almost, almost enough.”)  Metacritic agrees with me, and ranks that review as a 50, alongside a piece by Time‘s Mary Pols (“A movie that aspires to be deep but never gets out of the shallows”) that Rotten Tomatoes lists as negative. If you flip Sharkey’s piece from positive to negative, that makes 4 positive reviews and 4 negative reviews from women, which makes 50% approval rating for the women.  That’s still slightly higher than the approval rating of male critics, but still, in the parlance of Rotten Tomatoes, a “rotten” average.

The claim that it’s older male critics raining on “Lola Versus”‘ parade is harder to fact-check on short notice — writers don’t typically sign their reviews with their age and birthday — but at a glance, the Rotten Tomatoes’ page includes pans by Indiewire’s Eric Kohn and Movies.com’s David Ehrlich, two guys I know are younger than me, and I’m only 31. And if I count as an “older male critic” this post is never going to get finished because I have to go sit in the shower and cry for the next three hours.

I haven’t seen “Lola Versus.” It might be amazing; it might be terrible. Obviously the reviews weren’t great — from both men and women — but the marketplace it opened into was even worse. The film’s per screen average was $8,525 — a solid figure, but good enough only for sixth best last weekend behind “Moonrise Kingdom,” “Dark Horse,” “Prometheus,” “Madagascar 3,” and “Safety Not Guaranteed.”  If you ask me, the real problem wasn’t critics. It was competition.

Not only were there a lot of new movies last weekend, most of them — at least three of the other five films — were also targeted at “Lola Versus”‘ audience of young, hip twentysomethings. So is the HBO series “Girls,” which the email above cites as an example of male critical bias. But maybe it’s just one more example of the glut of similarly themed pop culture fighting for one small niche’s attention.

True, the other films ahead of “Lola Versus” on the box office chart got better reviews. But they also featured bigger stars like Bill Murray and Bruce Willis and established indie directors like Wes Anderson and Todd Solondz. Critics didn’t help “Lola Versus.” Realistically, though, in this sort of competitive environment, the reviews could have been scented with pheromones designed to subconsciously spur potential viewers to the theater and Wein and Lister Jones would still have had problems. When that tagline said Lola was going to take on the world, brother it wasn’t kidding.

This Article is related to: News and tagged Daryl Wein, Lola Versus, Zoe Lister Jones