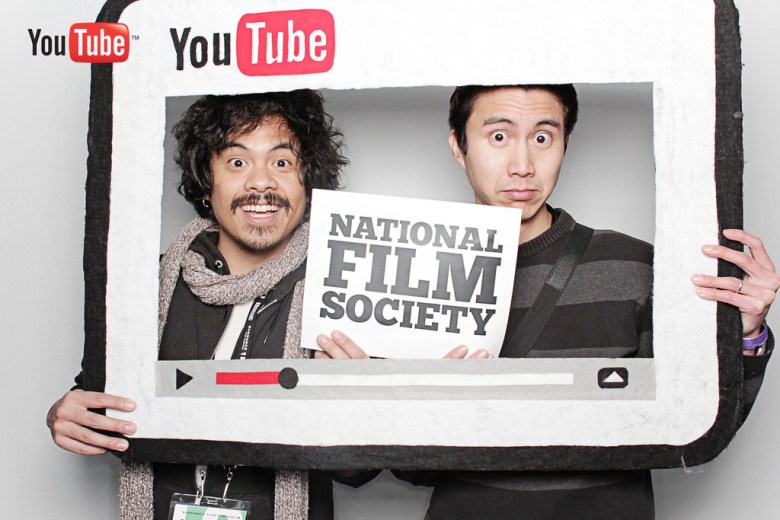 When filmmakers Patrick Epino and Stephen Dypiangco were looking for a name for their YouTube channel where they’d discuss all things film, they were inspired by an article on Indiewire’s Women and Hollywood blog about a “New Faces of Indie Film” panel at the Film Society of Lincoln Center touting the future of indie film.  As Melissa Silverstein at Women and Hollywood and Tambay at Shadow and Act pointed out, only one woman and no people of color were on the panel.

“We wanted to be not-that. We aren’t white.”  They ended up calling themselves the National Film Society because the name was not taken and as they told Indiewire, “We wanted to take this old sounding name and subvert expectations.”

After only a few months at the helm of their own filmmaker-centric web series, which seems irreverent but is actually quite interested in exploring the ideas that are at the center of filmmaking today, the two have signed a contract to be a part of PBS’s digital arm.  As Dypiangco explained, “There’s this gap in the middle between young kids and older people that aren’t necessarily watching PBS.  They aren’t even really watching TV!”  The National Film Society, as the duo sees it, is a part of PBS’s online strategy to reach the audience that is watching a lot of online video.

The two met in 2010 at the Los Angeles Asian Pacific Film Festival.  Dypiangco was interning with Jon Reiss, author of “Think Outside the Box Office.”  Epino was familiar with that work and the two began talking about creating an audience using online tools.  One of Dypiangco’s friends who was working in online video told him, “All these teenagers out there who are doing really well on YouTube don’t know what they’re doing.  You have skills.”

When they decided to start up the National Film Society YouTube channel, Epino was, he admitted, “burnt out” by the feature he made, “Mr. Sad Man.”  The National Film Society, Dypiangco explained, was “born out of frustration.  Our careers were not going anywhere.  We loved our time in film school, but coming out of there, it’s difficult to make stuff.  The last time we both shot something narrative, which is what we wanted to do coming out of school, was in 2007.  Films take so long to make, so many people, so much money…  We can just put up a video every week, and it’s a lot of fun.”

Epino added, “More people have seen these videos than all of our other films combined.”

The duo used their film school connections to get their first few guests.  Oscar-winner Luke Matheny (for his 2011 short “God of Love”), who Stephen knew from film school, opened up a few doors.  It even helped them get accreditation at Sundance, where they teamed up with Filmmaker Magazine to provide web content.  There, they asked “Robot and Frank” star Frank Langella for advice and performed their robot dance and compared robot voices for him.

As for the near future, “We’re always looking to collaborate,” Dypiangco told Indiewire.  “We have a couple of interviews that we’ve shot.  A blogger, Angry Asian Man, ranks his top 5 Bruce Lee films.  Apparently there are only 5 Bruce Lee films.  We love working with actors.  We’re looking to collaborate with other people on YouTube and the other PBS channels.  We’re definitely interested in building this community, building the National Film Society.”

Epino continued, “We’re trying to build a close bond with our audience.  From having made a long film and having it take a long time.  The kind of feedback you get on a weekly basis, it’s been super satisfying.  This way you can meet people and work with people consistently and meet people all the time.  We’re such a light operation, a lot of fluidity to it, and that’s a lot of fun.

Continue on to the next page to see the National Film Society in action, answering the questions haunting today’s aspiring filmmakers most pressing questions, like “Film School or No Film School?” and “Do Internships Suck?” But first, what do these guys like?

Patrick: “The Killing of a Chinese Bookie,” “The Breakfast Club,” “Fallen Angels,” “Breathless,” “Last Life of the Universe,” “Cabin Boy”

For more from the National Film Society, visit their YouTube channel.

This Article is related to: Features and tagged Movie Lovers We Love