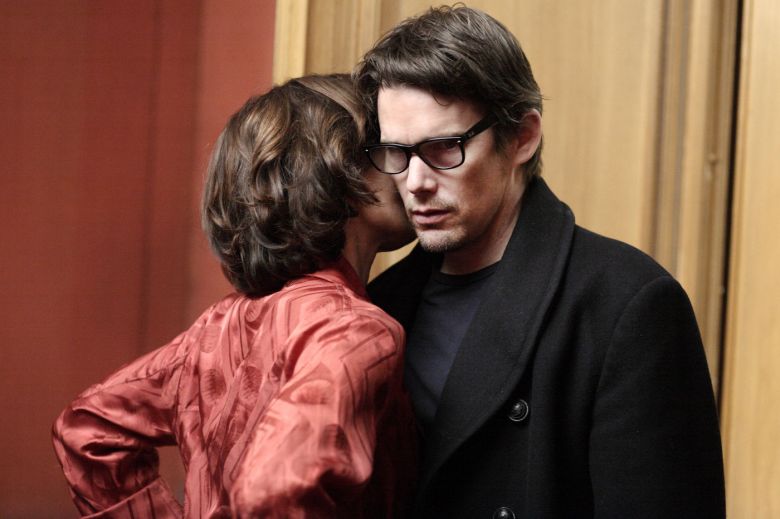 In “The Woman in the Fifth,” Pawel Pawlikowski’s first film since 2004’s “My Summer of Love,” Ethan Hawke plays Tom Ricks, a divorced American writer who hides out in a hotel room to pen his latest work. Sound familiar? After building a huge fan base with generation-defining turns in “Reality Bites” and “Before Sunrise,” Hawke became better known for his tabloid appearances after divorcing his “Gattaca” co-star Uma Thurman amid rumors of infidelity on his part. Seeking retreat from the public eye, Hawke sequestered himself to the Chelsea Hotel in Manhattan for a couple of years and opted for theater over film work (as well as some novel writing).

Since emerging from that difficult period, Hawke’s been busy. He reunited with Richard Linklater for “Before Sunset,” worked for the late Sidney Lumet in “Before the Devil Knows You’re Dead” and reteamed with his “Training Day” director Antoine Fuqua for “Brooklyn’s Finest,” along with a slew of other projects.

His latest, “The Woman in the Fifth” (out in select theaters Friday and available on VOD), is set in a gloomy Paris and co-stars Kristin Scott Thomas as a mysterious, sexually charged woman who enters Tom’s life and serves as his muse.

Indiewire caught up with Hawke in Manhattan to find out why he played a part so close to home and what he really thinks of the American film scene.

Fans of yours going into “The Woman in the Fifth” will no doubt draw parallels between you and the character you play in the film — both writers, both divorced, both fathers. Did the similarities play a big role in you taking on the part?

I think there’s something kind of fun when you can blur the lines between fiction and nonfiction, where you can bring yourself to the character and then bring the character to you, and make it kind of almost – if you switch the lines, you’re not even sure where one begins. I had this kind of very bizarre theory. In a way the character was, I imagined, Todd Anderson from “Dead Poet’s Society” turning forty and having a long history of depression [laughs] — a writer, a decent guy, who had run into some real problems in his life.

As far as the personal thing goes, I like to make everything personal. Performances where I fail to make it personal, to me, that’s when I feel I do the work I enjoy the least. I enjoy that aspect. It wasn’t why I picked it. In many ways, the movie is a meditation on depression. This character is kind of an estranged artist type person who wants to fit in, wants to feel normal, but kind of isn’t. I certainly enjoyed being able to bring aspects I could relate to.

With that said, what kind of a toll do your performances take on you, given that you invest so much of yourself in the roles — well, the ones you “enjoyed?”

It’s almost a better question for my wife to answer. I know with “Before the Devil Knows You’re Dead,” for some reason that was the hardest for me. It’s not something you do on purpose. It happens to you. If you spend your whole day playing with your emotional life, it affects you. 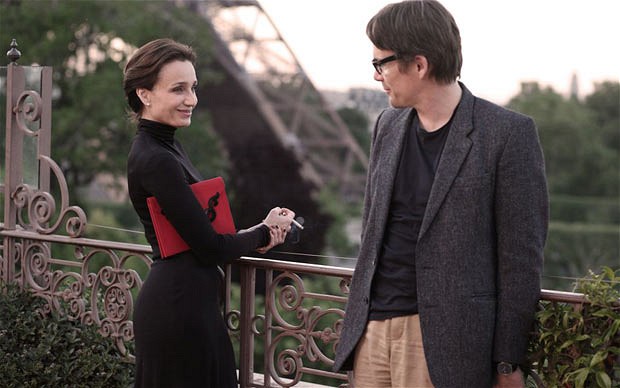 I remember when I was a senior in high school, one of my buddies and I wanted to play a prank on the rest of school. We pretended to have a fight and start a rumor. We just wanted to see how fast the gossip line would start. But by the end of the day we were both angry at each other. By pretending we were in a fight, we opened a door of deceit about what we didn’t like about the other person.

I don’t know what it is. I just know that when I play these characters, they dive into your subconscious. The funny thing about this movie is I made some movies that are influenced by European filmmaking, like “Before Sunrise” and “Before Sunset.” But I’d never really worked with a full-blown European artist who comes from that school and didn’t grow up watching “Raiders of the Lost Ark.” They literally called me The American Populist on the set. They really see cinema as an art form. In this country, it’s kind of pretentious to say that. People want it to be big business. These Polish guys, they laugh at that – the idea of how big businesses have usurped a whole artistic medium. If they did it to literature, what would happen?

Most independent movies are aspiring to be a commercial success. They’re Hollywood movies in terms of storytelling, done with a smaller budget. Very rarely do you see something where you’re like, “Wow.” But hey, “The Tree of Life” was a full-blown art film.

He has the Get Out of Jail Free card — one person in a generation. He’s the J.D. Salinger of movies. 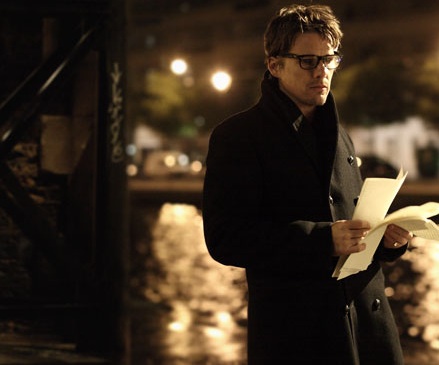 Watching “The Woman In the Fifth,” I was struck by how at home you seem in that world, despite playing the foreign character. Your French isn’t up to the level of that of your co-star Kristin Scott Thomas, but it’s pretty good. Would you ever consider making the move to Europe, and sticking to artier, edgier Euro fare like Kristin has for most of her career?

It’s interesting. I hadn’t thought of it until I met her. But I can’t think of anyone else who has had such success in two different countries, in two different languages. And then when you throw into the equation that she’s had tremendous success as a theater actress, it’s, wow. It makes her really unique. French movies, British movies, American movies…

It did make me wonder. It’s definitely easier to make smaller-budget independent movies. If you wanted to make “The Woman in the Fifth” as an American movie, you’d be relegated to shooting it on some DV format and making it for cheap. Part of the thing I love about “The Woman in the Fifth” is the photography. It’s gorgeous. I’ve never been on a set where people care so much about the composition of every frame, the depth of feel, the colors. The way they talked about it was the way you think they talk in cinema studies class. They really put a tremendous amount of thought into what each shot was saying. I was intrigued by Kristin. There are only a handful of people in my profession who really do keep getting better. It’s hard to do that. She’s just one of those people who keeps putting herself in unique situations and doing cool things.

Did this European approach to filmmaking make you want to get back in the director’s chair? It’s been six years since your last film, “The Hottest State.”

The funny thing is that when I get to work with Sidney Lumet or Antoine Fuqua or Richard Linklater or Pawel — people who have voice with the camera — then I kind of lose my desire to direct movies. Those guys all make you feel like a filmmaker. They are so collaborative. I’ve enjoyed making my own films and embarking on my own projects. I really enjoy doing that. But when I work with a really great filmmaker, I feel that’s what I want to do most with my life. The way I’ve learned about writing and filmmaking is via acting.

One of the things I struggle with – and this is no disrespect to first-time filmmakers – but I’ve now been making movies for 25 years. It’s so much easier for Hollywood to give a first-time filmmaker a movie. It’s kind of the Orson Welles myth. They do it because they can control the person. If they get someone with experience, they’re going to want to put their stamp on it. It’s so hard to work with somebody who doesn’t have a handle on the material.

Getting to work with an 83-year-old Sidney Lumet and realizing, Wow, you really can’t fake experience, was so fun. Pawel, whatever you want to say about him, he’s a filmmaker. He just is.

Now you and Richard Linklater have something in the works right?

Linklater and I have been working on a film called “The 12-Year Project,” which will have a proper title someday. We make a short film once a year, and it follows the life of a little boy from first grade to twelfth grade. And so the movie is a series of vignettes. I play his father; just little moments of childhood and stuff. What the movie’s largely really about is time. 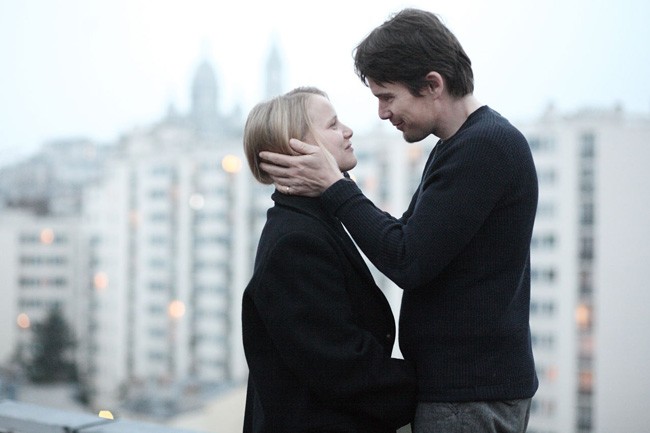 We’re also doing a follow-up to “Before Sunrise” and “Before Sunset,” so that will be fun. We’re going to shoot that this summer.

Where will this one take place?

I’ve gotten into trouble, so I’m sworn to secrecy. The biggest change between this one and the last one is the Internet. The first time we did it, we didn’t have any pressure; nobody gave a shit.

And you’re also set to reunite with Pawel?

Pawel and I have another movie that we want to make, which is a comedy. I highly recommend to anyone — he has some Russian documentaries that are so funny. They are just drop-your-lunch funny. We want to do a romantic comedy, believe it or not.

Circling back to “The Woman in the Fifth,” that first sexual encounter between you and Kristin’s character, where she has the upper hand, has a comedic element. How did you negotiate how to play that scene?

We were trying to figure out who she was. Making this movie was a lot like being in a room with a painter. It was trying to figure out what she symbolized. Is she alive, is she dead? In many ways, we were really playing different aspects of the same character. So we realized that the first sexual action is probably a masturbatory one. We came up with that and were like, oh fuck. I think the scene is really funny. Doing those kinds of scenes are very strange. They’re very strange. [laughs] “Hi, my name’s Ethan, and this is how I orgasm.” It’s tough.

This Article is related to: Features and tagged Ethan Hawke, Interviews, The Woman in the Fifth