Out This Week: 6 Reviews of Indie Releases (Plus Batman) 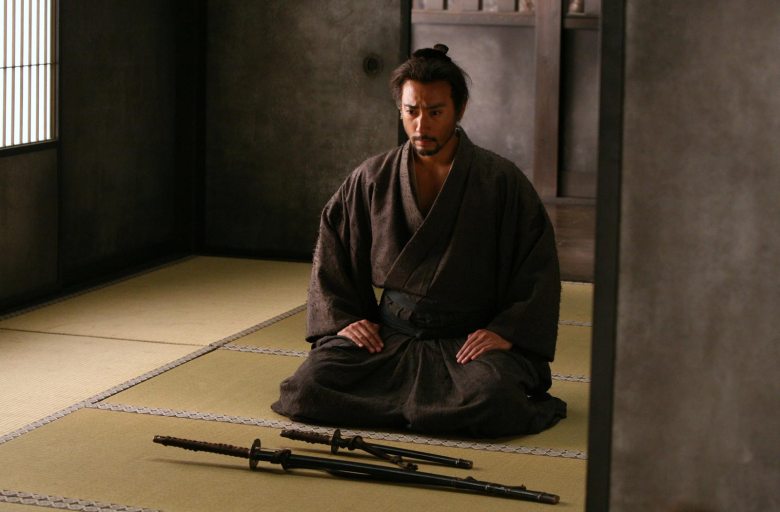 This weekly column is intended to provide reviews of nearly every new indie release, including films on VOD. Specifics release dates and locations follow each review.
REVIEWS THIS WEEK:

“Hara Kiri: Death of a Samurai”

“The Queen of Versailles”

“Shut Up and Play the Hits”

“You Will Be Mine”

Rarely has so much sex provided so little satisfaction as in “30 Beats.” Writer-director Alexis Lloyd’s feature debut details the carnal adventures of a small group of loosely connected young people during a New York heat wave. Among them are two virgins (one of each sex), a lesbian switchboard operator, a woman whose heart ailment has left her sexually paralyzed, a call girl and a dominatrix. The ensemble cast includes Jennifer Tilly, Paz De La Huerta and Thomas Sadoski (“The Newsroom”). There seems to be more than enough material and talent for an engaging movie, but Lloyd numbs viewers with claustrophobic talk about sex while providing little on-screen action. (A very brief bondage scene is an exception.) Too bad the movie isn’t as torrid as the weather it depicts. Criticwire grade: D [V.A. Musetto]

Director Christopher Nolan’s dramatic re-envisioning of the Batman franchise comes to a thundering end with a spectacular noir epic that’s equal parts murky, bloated, flashy and triumphantly cinematic. Four years after Nolan’s “Batman Begins” sequel “The Dark Knight” rattled audiences with a similar audiovisual overload, the new movie falls into the same rhythm and remains viscerally satisfying even when the story falters. Once again, Nolan’s monolithic take on Batman is a jarring, fractured experience fraught with tension right through its daringly open-ended conclusion.

Among the recent spate of superhero blockbusters, Nolan’s Batman movies have stood out for conveying both mature direction and fiercely intellectual screenplays, but they move so quickly that it’s often hard to tell if they earn the pervasive reverence. At the end of the day, the three movies follow the same formula, blending dreary CGI spectacles with grave pontifications and brutal action. People scowl and whisper as often as things blow up, which in these times is something of a Hollywood anomaly. Viewed as a whole, Nolan’s trilogy is enticing and frustratingly obtuse in equal measures, not unlike Batman’s homegrown moral code. “The Dark Knight Rises” introduces some intriguing new characters — supervillain Bane is menacing as hell, but Anne Hathaway’s Catwoman disappoints — although at this point a lot of it reeks of familiarity. Criticwire grade: B [Eric Kohn]

Originally reviewed July 16, 2012. Opens in theaters around the country July 20. Released by Warner Bros. Watch the trailer below:

“Hara Kiri: Death of a Samurai”

In Japanese filmmaking machine Takashi Miike’s loose adaptation of the 1962 “Hara-Kiri: Death of a Samurai,” the best moments come at the end. A despondent samurai faces down the minions of a feudal lord, staging a ferocious battle for the memory of the relatives whose lives were lost to the lord’s cruel mandates. The swordplay buzzes along at a breathtaking rate, the bold fighter takes on dozens of foes at once and Miike cuts to the fleeting image of a cat watching the whole thing go down. In that passing shot, which lasts no more than a second, the director suddenly elevates the material with the welcome element of surprise. Unfortunately, it’s a lonely moment.

Still, Miike has a reputation for violent overstatement, along with the skill to frame it in cinematic terms. Ironically, his first movie made for 3-D projection finds him a lot less sensationalistic than usual. “Hara-Kiri” is essentially a melodramatic period piece with occasional spurts of blood. The story revolves around Hanshiro (Ebizo Ichikawa), a broke, middle-aged fighter who arrives at the militant House of Li and requests to commit ritualistic suicide before the disciplined head Kageyu (Koji Yakusho). The lord instantly suspects that Hanshiro has plotted a “suicide bluff,” playing on the lord’s sympathies to get money out of him without meeting his death. Kageyu tells Hanshiro about the grisly fate of Motome (Eita), whose obvious suicide bluff led to his untimely demise when Kageyu then forced the young man to commit the act. In a flashback, Motome’s gory end is seen in extreme close-up.  Now this is the Miike we know and love. With its lethargic pace, “Hara Kiri” may disappoint more often than it delights, but the payoff is extreme in more ways than one. Criticwire grade: B [Eric Kohn]

Originally reviewed May 19, 2011. Opens Friday at the IFC Center in New York. Currently available on VOD. Released by Tribeca Films. Watch the trailer below:

“The Queen of Versailles”

The allure of boundless wealth provides fertile ground for documentarian Lauren Greenfield in “The Queen of Versailles,” a glossy portrait of a billionaire too confident to face the reality of his impending financial woes. Known by peers as “the timeshare king,” real estate mogul David Siegel once built the largest and most expensive home in the country, a 90,000-square-foot mansion near Orlando that he was forced to put on the market after the recession hit. A self-made entrepreneur addicted to materialism, he never hesitates to speak his mind. “If people don’t need to feel rich, they’re dead,” he asserts — which makes “The Queen of Versailles” a story of Siegel’s battle to survive when everything he takes for granted becomes his enemy.

Slickly made if not particularly stylish, the movie maintains its entertainment value for picking ideal models of American excess. Siegel’s former-model wife, Jackie, is a walking stereotype hopelessly enveloped in luxury. After an amusing first half, however, “The Queen of Versailles” gradually shifts toward tragedy. Faced with economic hardships that endanger the future of Siegel’s massive real estate empire, the couple chooses to put their home, “Versailles,” on the market with an impossible price tag. Greenfield’s documentary never breaks its generally upbeat tone to dig deeper, but it benefits greatly from a tight structure and bountiful footage. As the family’s capitalistic delusions melt away, the saving grace of “Queen of Versailles” arrives when Siegel’s confidence crashes even harder than his bank account. Criticwire grade: B+ [Eric Kohn]

“Shut Up and Play the Hits”

At a pivotal moment in “Shut Up and Play the Hits,” James Murphy cries. For committed fans of LCD Soundsystem, the paradigm-shifting dance-rock group that abruptly ended its decade-long rise with the 2011 Madison Square Garden show captured in the documentary, Murphy’s tears are a collective enterprise. He sobs for all of us.

If you’ve never heard of LCD Soundsystem or cared much for the group’s work, “Shut Up and Play the Hits” still manages to explore the prospects of fame and contemporary rock music’s lasting relevance. For those familiar with the thick blend of electronic rhythms, funky keyboards, dirty guitars and lead singer James Murphy’s ability to croon and holler into the microphone in equal measures — often over the course of frantic and hugely infectious tracks — directors Will Lovelace and Dylan Southern provide a terrific showcase of the band’s appeal and the rabid fandom that supported them. Criticwire grade: B+ [Eric Kohn]

Originally reviewed July 17, 2012. Released by Oscilloscope Laboratories around the country for one day only earlier this week. It will play at New York’s IFC Center for a full week starting July 27. Available soon on VOD. Opens in the UK September 4. Watch the trailer below:

“She isn’t a daughter, she’s a treasure from the good lord,” well digger Pascal Amoretti (Daniel Auteuil) says of daughter Patricia (Astrid Berges-Frisbey). The father’s idealized love for his daughter — and fear of the separation that must ensue with marriage — comes crashing down to threatened-slapping lows when Patricia is impregnated — tastefully off-screen, with only swaying fields seen and Alexandre Desplat’s soupy strings heard — by merchant’s son Jacques Mazel (Nicolas Duvauchelle). Sent to World War II and presumed dead, Jacques leaves Patricia with child and without her father’s love. While Patricia’s sent into exile to live with a disreputable aunt, Pascal broods with suitable highlight-reel intensity. Jean-Francois Robin’s shots of the lovely French countryside are the most enjoyable part of this staid heritage production, which has a very ’90s-Miramax feel to it. Performances are fine all around without remotely suggesting anything like emotional depth; this is textbook postcard filmmaking, but wan (melo)drama. Criticwire grade: C+ [Vadim Rizov]

Opens Friday at the Quad Cinema in New York. Released by Kino Lorber. Watch the trailer below:

“You Will Be Mine”

Concert pianist Marie Dandin (Judith Davis) is not only the focus of “You Will Be Mine,” but the narrative mirrors her emotional swings during a tumultuous year at the Lyons National Conservatory. Marie is impetuous and frustrating, driven by whims and struggling to hit the right note. While falling into sexual relationships with her possessive roommate Emma (Isild Le Besco) and easygoing fellow pianist Sami (Johan Libéreau), Marie struggles to become the poised, polished artist her teachers expect. Writer/director Sophie Laloy’s feature debut has echoes of other French films that combine classical music with romantic obsession (“The Page Turner,” “The Accompanist”), but it lacks their cool calculation. With Emma, Marie seesaws from attraction to repulsion: she clings one minute and flees the next. Their messy, painful relationship has all the high drama of late adolescence, and Sophie Laloy probes the tenderness and violence until Marie can no longer tell whether she’s laughing or crying. Criticwire grade: B- [Serena Donadoni]

Available Friday on VOD with most cable systems. Released by Film Movement. Watch the trailer below:

This Article is related to: Reviews and tagged Capsule Options, Hara-Kiri: Death of a Samurai, Out This Week, Review Capsules, Reviews, Shut Up and Play the Hits, The Dark Knight Rises, The Queen of Versailles