Is Crowdfunding Right for You? One Filmmaker Crunched the Numbers So You Don't Have To 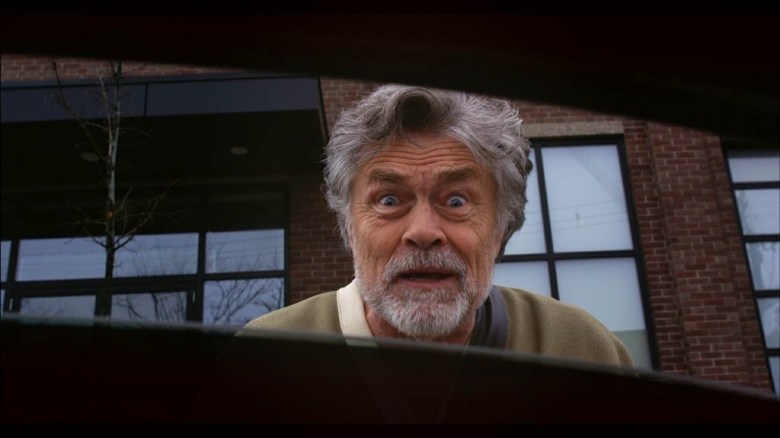 Last year, James Cooper completed a successful Kickstarter campaign for his short film “Elijah the Prophet” and decided to write about his experience. In his new ebook, “Kickstarter for Filmmakers: Prepare and Execute Your Next Crowd Funding Campaign,” Cooper has clearly done his research. He’s crunched numbers and asked around the industry, and the result is a very readable, surprisingly helpful guide to preparing yourself for a crowdfunding campaign. While the complete ebook can be purchased through a variety of stores (the full list can be found by visiting the book’s website), Indiewire has been given permission to reprint the following excerpt.

Is Crowd Funding Right for Me and This Project?

Seems simple, and probably a little obvious, but you’d be surprised by the number of campaigns that are launched without ever taking this into consideration. Crowd funding is not free money, and success isn’t made possible through the simple act of having a campaign. There are several questions to ask that will lead you to determine if you should be pursuing a crowd funding campaign or not:

Is the film interesting to people who aren’t working on it?

This is possibly the toughest question to ask, because people don’t like to consider the idea that they have a project that doesn’t really have an audience. Many filmmakers,  are guilty of making films for themselves. This works when you’re footing the bill yourself, but when you’re looking for money from outside sources, you’re going to need elements that hook your potential audience. This may be a killer story, a unique way of making the film (stop motion, green screen, etc.), or noteworthy cast/crew (or anything else you can think of that makes your project stand out), etc. Preferably, you’ll have a combination of things.

The key here is to make sure you have a project that will catch not only the eyes of family and friends, but also their friends, people who follow you on Twitter, and complete strangers that may happen by your campaign by any of a hundred different ways. The longer crowd funding is around, the more widespread its usage becomes, and the easier it is to become lost in the shuffle. It hearkens back to the early 90’s independent film boom: when there were less people out there doing it, it was easier to get attention, but with the advent of digital technology and the numerous DIY solutions, there are so many filmmakers making low budget indies that it requires more and more to stand out. This is quickly becoming the case with crowd funding as well.

The significance of this question grows with your financial goals. As we saw in the statistics, the number of successful campaigns drops significantly every couple thousand dollars you climb, so you really have to take stock of your film as honestly as possible. If you must, ask friends who aren’t afraid to tell you what they really think: “If you didn’t know this was my project, would you be interested enough to put in a few bucks?”

Do I have a network/fan base capable of raising a majority of the funds required to hit my goal?

Assuming you answered the previous question with ‘yes’, now comes the next tricky question. You might have 1000 friends on Facebook and twice that in Twitter followers, but that isn’t necessarily what it takes to win the crowd funding war. As the old adage goes: it’s quality, not quantity. What that means in regards to your campaign is: yes, you might have 2000 Twitter followers, but how many are people you regularly interact with/interact with you? How many are following what you do with an active interest? Additionally, the half of the question that’s even harder to accurately determine: how many of those are interested enough that they would toss a few bucks into a project you had? This goes back to “Is the film interesting to people who aren’t working on it?” 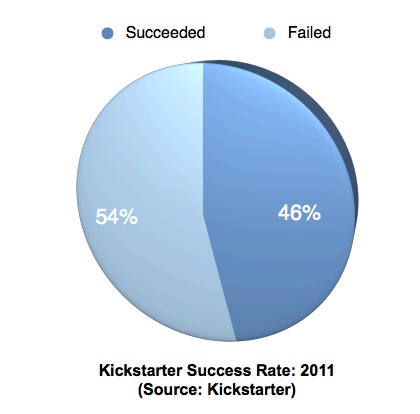 According to Kickstarter, they have a platform-wide success rate of 46%, which means you really need to be able to gauge the practicality of your campaign. This brings us to:

Is my goal realistic?

The higher your goal, the higher the risk you take that you may not hit it. In 2011, there were  1084  successful short film productions funded on Kickstarter, collectively representing $4,802,336 in pledges. Here’s a look at how they break down financially: 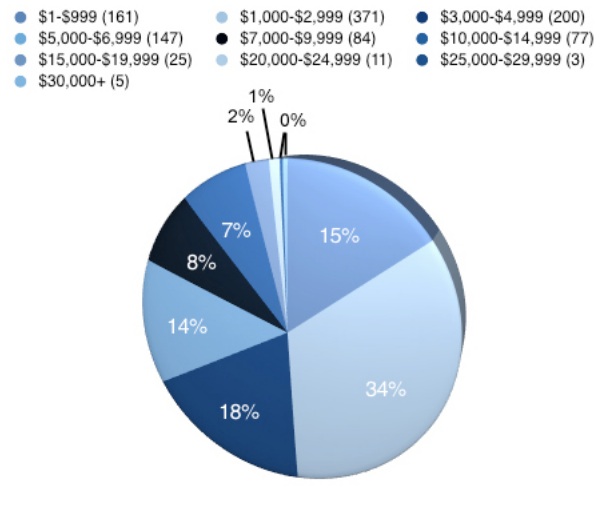 
The way these numbers break down is pretty interesting. We see that the $1,000 – $2,999 budget range easily dominates with 371 (34%) of the take, which is good news for anyone with a small(ish) budget short. There’s a 46% drop between the number of successful projects in the $1,000 – $2,999 range and the $3,000 – $4,999 range, marking a distinct rise in difficulty of reaching success after only a couple thousand dollars more in the goal. This is definitely something you want to pay attention to if you’re unsure of if you want to go for that extra thousand or two. It might be a safer bet to aim lower and hope to over fund or search for the remaining funds elsewhere.

Interestingly, the number for successful feature film campaigns in the same year is drastically lower: 309. The features break down like this: 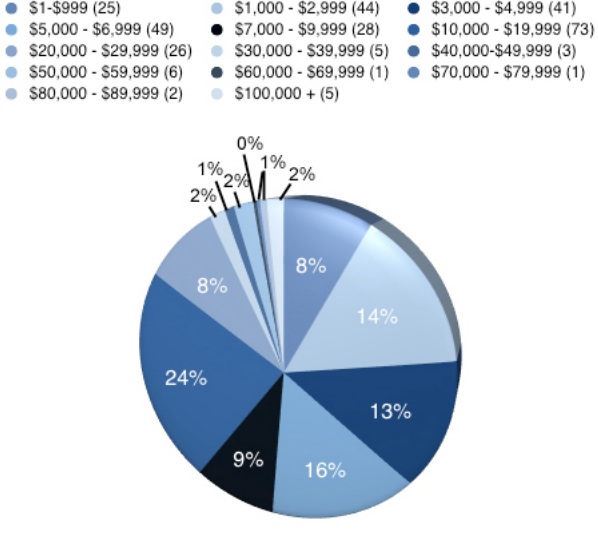 
One thing that’s certainly worth noting here is the popularity of the $10,000 – $19,999 range. 73 successful projects fall into this goal range, while there is a 64% drop in successful projects once you break into $20,000 – $29,999 territory. Definitely something to consider when determining your own goals.

The lower range budgets ($1,000-$6,999) are split up fairly evenly, which should be good news for anyone planning to hit a target in this range.

Once you pass the $30,000 mark, though, success becomes scarce. Only a few projects succeed in each of the goal ranges beyond $30,000, which may be indicative of the limits of crowd funding for a film project.

It’s interesting to note that the $100,000 + range has just as many successful projects as the $30,000 – $39,999 range. Without knowing how many projects were attempted with these goals, it’s hard to know how those numbers correlate exactly, and unfortunately, Kickstarter was not willing to play ball with me when I requested their cooperation for the book.

While you can use crowd funding to raise money for any aspect of your film, from production to marketing to festival fees, the numbers I provide in these charts are strictly for production. I thought it best to streamline for the aim of the majority: getting the film made. That being said, crowd funding your festival fees is a great way to make sure your film gets out there in the event that you run out of money making it.

How long should the campaign be?

This is a hotly contested question many have when setting out to begin their campaign. Most just set the campaign length at the maximum allowed (Kickstarter: 60 days, Indiegogo: 120 days), somehow thinking that maximum campaign length correlates to maximum odds of campaign success. This is not true at all, actually.

Campaigning takes a lot of time and effort to pull off properly, so consider the energy you will expel by the time your campaign is over, and you’ll start to rethink defaulting to the maximum length. To that same effect, people will get tired of you pushing the campaign on them. As we’ll see in the case study portion of the book, it is nearly universal that crowd funding campaigns see a lull in the middle of their life. They start with a big boom, and end with a final push, but things tend to die down in the middle. The longer your campaign is, the longer the middle is.

Kickstarter claims that campaigns with a 30 day timeline have the highest rate of success. The sense of urgency pushes people to action, whereas people will tend to procrastinate if they feel like there’s a lot of time before your deadline.

This Article is related to: Toolkit and tagged Filmmaker Toolkit: Crowdfunding, Kickstarter, Toolkit