The 16 Indies to Watch on VOD This September 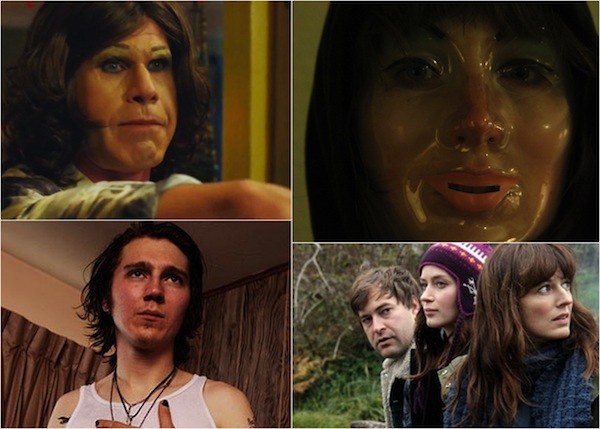 Indiewire has weeded through the films hitting VOD this Fall month to bring you a curated list of the 16 most worth your time. You’ll find everything from a madcap comedy that features “Hellboy” himself, Ron Perlman, in drag to the debut feature from Boyd Tinsley of Dave Matthews Band fame, from the latest improvised romantic comedy from “Humpday” director Lynn Shelton to a found-footage horror movie that took Sundance by storm earlier this year and a drama that boasts Paul Dano’s best performance yet.

Here are the 16 films to watch on VOD this September, in alphabetical order:

If the title “3, 2, 1… Frankie Go Boom” doesn’t get your attention, then the wacky plot should do the trick. In the comedy, Charlie Hunnam stars as the titular Frankie, a sad sack who spent his childhood being pranked by his brother, Bruce (Chris O’Dowd). After an unsuccessful one-night stand with the beautiful but sad Lassie (Lizzy Caplan), Frankie is horrified to learn that Bruce caught the whole thing on tape. Things only get wilder from there, as Frankie embarks on a zany journey to stop the tape from hitting the internet. Look out for Ron Perlman in drag (spoiler alert: it ain’t pretty).

Jennifer Garner heads an impressive cast that includes Ty Burrell, Olivia Wilde, Hugh Jackman, Rob Corddry and Alicia Silverstone in “Butter,” the Weinstein Company’s Tea Party-lampooning comedy that unspooled last year in Telluride and Toronto. The “Alias” star plays Laura Pickler, the wife of a former butter-sculpting champion who takes a stab at mastering the craft with aspirations for political office in mind. Her chances at taking over her husband’s title are threatened when an African American girl named Destiny (Yara Shahidi) comes to town armed with a winning smile and major butter-carving talent. Garner is great as a conservative housewife with a close relationship to God, and an even closer one to butter, but it’s Wilde who steals the show as a stripper hellbent on making Laura’s life a living hell. Why? You’ll have to watch to find out.

If prestige is your thing, then you can’t go wrong with “The Eye of the Storm,” Fred Schepisi’s drama based on the novel by Nobel Prize winner Patrick White and starring two of Australia’s greatest living actors, Geoffrey Rush and Judy Davis, plus the legendary Charlotte Rampling. Set in the Sydney suburb of Centennial Park, the film centers on a group that convenes at the deathbed of the wealthy Elizabeth Hunter (Rampling), a once-great beauty used to controlling all in her life.

“Faces in the Mirror” (September 1)

In making his debut feature as a writer and producer, Boyd Tinsley of Dave Matthews Band chose to do things a little differently: he scored the film before penning the script. The result, “Faces in the Mirror,” is an experimental indie that’s driven by a percussive score (recorded by Tinsley, his DMB bandmates, Shawn Smith of Brad and the Seattle band Maktub) and little-to-no dialogue. It tells the story of a young man who on the day of his father’s funeral goes on a dreamlike odyssey where he’s led, portal by portal, to fantastical places. The story, like the film’s production process, defies easy categorization. It requires that you just go with it, preferably with the volume on your speakers turned all the way up.

READ MORE: Dave Matthews Band’s Boyd Tinsley On Why Making His Debut Feature ‘Faces in the Mirror’ Wasn’t All That Different From Playing a Violin Solo

In So Yong Kim’s “For Ellen,” Paul Dano dons a black leather jacket and eye liner to play an aspiring rocker who agrees to sign divorce papers for his estranged wife in order to get money from the sale of their home. Trouble arises when he realizes his daughter is also part of the bargain and he will be forfeiting all parental rights to her. Kim (“Treeless Mountain,” “In Between Days”), who debuted the drama at Sundance, keeps the pace leisurely for the most part, but stick with it — the emotional payoff is huge. And Dano, playing against type as a rocker at a dead end in his life, is a total marvel.

“How to Survive a Plague” (September 29)

A chronicle of AIDS activism in New York, David France’s acclaimed doc — which premiered to great acclaim at Sundance earlier this year — shows how a group of men and women fought against a homophobic establishment to help bring life-saving drugs to America. It’s a remarkable part of American history that too few are aware of, and one that comes to theaters exactly 25 years after ACT UP (AIDS Coalition To Unleash Power) — the activist group at the core of “Plague” — held its first demonstration.

READ MORE: How To Make a Powerful AIDS Doc: Talking to the Team Behind ‘How To Survive a Plague’

The latest documentary from filmmakers Ricki Stern and Annie Sundberg (“Joan Rivers: A Piece of Work”) is a funny and deeply engaging look at the legendary subculture of the impossible-to-hit pitch and the folks who have the guts to throw it. Filmed throughout the 2011 baseball season with access from Major League Baseball, the film follows R.A. Dickey (New York Mets, now a 2012 All-Star) and retired 18-year veteran Tim Wakefield (an icon of the Boston Red Sox) and explores the bond between the two active pitchers and their only allies, the five retired knuckleballers: Hall of Famer Phil Niekro, Charlie Hough, Wilbur Wood, Jim Bouton and Tom Candiotti.

“How I Met Your Mother” star Josh Radnor proves that his crowd-pleasing directorial debut “Happythankyoumoreplease” was no fluke with his charming follow-up “Liberal Arts.” In the romantic comedy, Radnor stars as newly single Jesse Fisher, a university admissions couselor in his mid-thirties living in New York. Upon returing to his Ohio alma mater for a retirement dinner in honor of his favorite English professor (played by Richard Jenkins), Jesse has a chance meeting with 19-year-old Zibby (Elizabeth Olsen) — an undergrad with a love for classical music, improv and “Twilight.” Guess what happens next…

Co-written by “Girls” sensation Lena Dunham and directed by up-and-comer Ry Russo-Young (“You Won’t Miss Me”), the Sundance drama “Nobody Walks” follows Martine (Olivia Thirlby), a 23-year-old artist from New York City who stays in the pool house of a Los Angeles family she has a loose connection to while she completes work on her art film. Drama ensues when the man of the house, Peter (John Krasinski), finds himself falling for Martine’s seductive ways. With a name like Martine, who can blame him?

In honor of its 20th anniversary, FilmBuff presents the VOD premiere of Tom Kalin’s seminal independent gay film “Swoon.” The drama tells the true story of Nathan Leopold Jr. and Richard Loeb, 18-year-old lovers who kidnapped and murdered a 13-year-old boy in 1924 Chicago. The reason? Simply to prove to themselves that they were smart enough to get away with it. Previous film versions of this salacious story (including Alfred Hitchcock’s adaptation of Patrick Hamilton’s loosely based play “Rope”) downplayed the duo’s homosexuality. Kalin’s film differs by putting Leopold and Loeb’s relationship front and center. Not to miss. (The film is also screening at BAM in Brooklyn on September 13. Go HERE for details.)

In Oscar-winner Mira Sorvino’s latest indie vehicle to hit theaters, “Union Square,” the actress plays Lucy, a manic mess of a woman who surprises her estranged sister Jenny (Tammy Blanchard) by showing up unannounced at her glam New York apartment overlooking the New York location of the title on Thanksgiving eve. Over the course of two days, Lucy and Jenny lay their grudges bare, reveal some big secrets and make an effort to get along once and for all. Broadway legend Patti LuPone pops up late in the film as the duo’s troubled mother.

No one would have guessed that, more than a decade after “The Blair Witch Project” broke box-office records to become one of the highest-grossing independent films of all time, audiences would still flock to found-footage flicks. From the ongoing success of the “Paranormal Activity” movies to the recent strong opening of “The Devil Inside” that caught many by susprise, one thing’s for sure — the subgenre is here to stay. “V/H/S,” a 2012 Sundance Film Festival Park City at Midnight selection that earned rave reviews upon its premiere and got picked up by Magnet Releasing, is one more in that vein. The buzzed-about film’s a collective horror effort featuring segments directed by Radio Silence, Adam Wingard, Glenn McQuaid, David Bruckner, Joe Swanberg and Ti West, much like the upcoming “The ABCs of Death.” To string all the parts together, “V/H/S” centers on a group of petty criminals hired to retrieve a rare piece of footage from a house filled with strange VHS tapes, which they must scan through individually.

What better way to celebrate the 40th anniversary of the Internet than by watching Ondi Timoner’s acclaimed documentary “We Live in Public,” which tells the story of the effect the web is having on our society as seen through the eyes of visionary Josh Harris. Timoner (“DIG!”) documented Harris’s tumultuous life for more than a decade to create a cautionary tale of what to expect as the virtual world inevitably takes control of our lives.

From Rob Burnett, CEO of Worldwide Pants and executive producer of “The Late Show With David Letterman,” comes his latest project, “We Made This Movie.” The coming-of-age indie chronicles the attempt by five high school seniors to make it big and get out of their small town. Their seemingly futile effort is made more hopeful when they realize that the only way to do so is to make a movie about their lives, which are in fact not all that boring.

Lynn Shelton (“Humpday”) might have assembled her highest-profile cast to date with her new feature “Your Sister’s Sister,” but don’t let the star names of Emily Blunt and Rosemarie DeWitt fool you. This drama is as raw and unpredictable as they come. Blunt plays Iris, sister to Hannah (DeWitt), who invites her friend Jack (Mark Duplass) to stay at her family’s island getaway after the death of his brother. Little does he know that she harbors deep feelings for him. So when Jack sleeps with Hannah following some ill-advised tequila shots, Iris doesn’t take the news too well.

This Article is related to: Features and tagged Butter, For Ellen, How to Survive a Plague, Knuckleball!, Liberal Arts, New On VOD, Nobody Walks, The Eye of the Storm, V/H/S, VOD, Your Sister's Sister