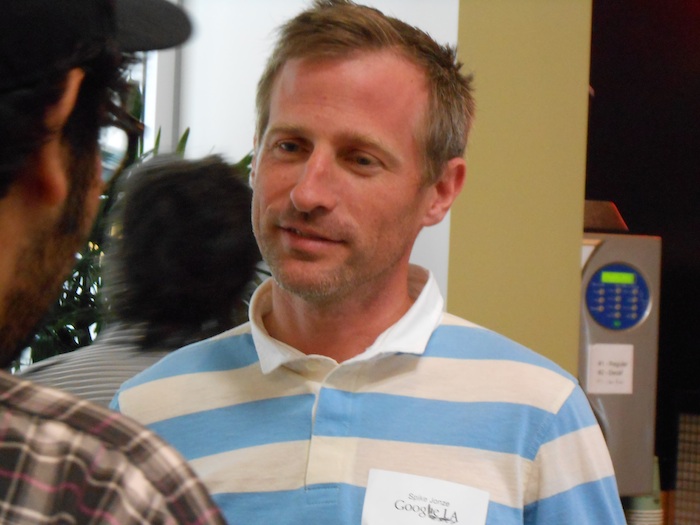 With “I can get you a toe” chalked on the wall, the Big Lebowski room at Google’s Venice complex was an inspirational environment to host the Sundance Institute’s ShortsLab LA 2012.

Headlined by Spike Jonze, who spent over two hours talking to the filmmakers, the sold-out August 11 event began with a screening of Jonze’s surreal Kanye West short “We Were Once a Fairytale.”

Sundance Film Festival director of programming Trevor Groth set the tone for the day with his introductory remarks.  “Over the years, I’ve seen so many amazing short films that have as much power as their longer, more popular big brothers, the feature film.  With a short, you have total freedom to do whatever you want.  Dig deep down in yourself to find some story you have a passion to tell.  If it’s a story that’s been told before, tell it in a fresh way.”

Here’s the highlights from ShortsLab LA:

Spike Jonze has some regrets about his early short films.
“I wanted to go and make things – to have an idea and go do it.  When I look at the shorts now, there’s so much more I would have done with them. I’d dig deeper into the characters.  That’s what time allows you to do, to challenge yourself to be more honest or revealing. But they’re a timestamp of that moment, of what I was thinking.”

What Spike learned from Charlie Kaufman: Don’t fight the feeling.
“Watching Charlie Kaufman work – he writes whatever’s occupying his mind.   Whatever he’s fascinated with, whatever he’s feeling, that’s what he writes.  His stuff has real potency.  I’m trying not to battle where my head is – anxiety or longing – I try to write where I am at that moment. Get energy from, rather than fighting, everything I’m feeling at the moment.”

Shorter is harder.
“I think it’s easier to write a feature than short,” said Nicolas McCarthy, writer-director of “The Pact.”  “Ever since we were young, we’ve digested movies.  We intrinsically know the rules of where we are in a movie; we understand our contract with the film. But with a short, there are no rules. There are so many different kinds of stories. You never know where they’re going to end. You can never predict when they will go to black and credits will start.”

For God’s sake, listen to your actors.
“Have empathy for actors’ bravery and vulnerability, for that’s what it takes to be an actor,” said actor, director and short-film veteran Matt Ross (“Big Love”). “Acting is very hard.  It looks easy, but it’s not.  Be respectful and treat your actors like a great asset.

“Learn to communicate well.  You can change your mind a thousand times, but you need to express why.

“Learn to speak in terms of things that are actable.  ‘Be funnier’ is not actable.

“Be collaborative.  I was fortunate to work with Scorsese, and I did whatever he said.  But in general, be collaborative.  A lot of young directors don’t bring that to the table.  They have an idea about what they wrote and won’t adjust their preconceived notions.  Why negate on set someone else’s ideas that would make you look awesome?”

But don’t expect actors to do your job for you.
“I expect directors to do their homework, and bring vision and creativity,” said Nick Offerman (“Parks and Reecreation”). “A film company is a set of toys. Come in knowing how you’re going to play with your toys.”

This Article is related to: Toolkit and tagged Filmmaker Toolkit: Shorts, Toolkit