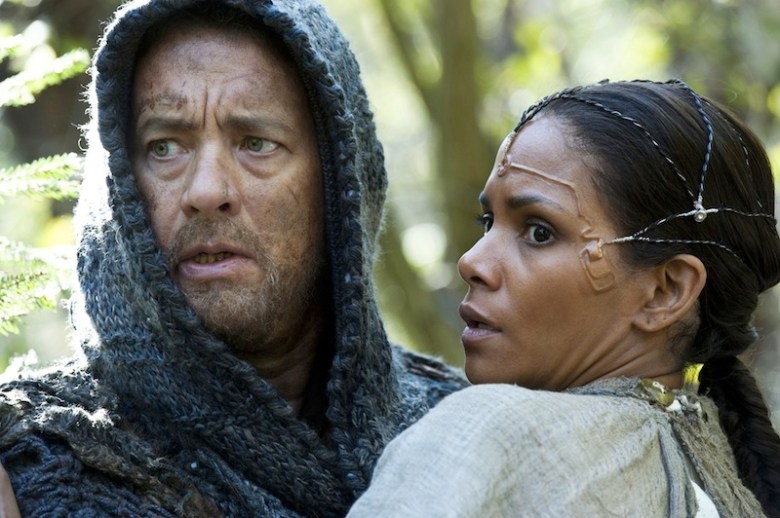 Before I show you the first reviews for The Wachowskis and Tom Tykwer’s “Cloud Atlas” I’m going to give you a choice. After this, there is no turning back. You take the blue pill: the story ends, you wake up in your bed and believe whatever you want to believe about “Cloud Atlas”‘ reception at the Toronto Film Festival. You take the red pill: you stay in Wonderland, and I show you how deep the rabbit-hole goes.

Don’t say I didn’t warn you.

Fans of the Wachowski’s “The Matrix” trilogy (or at least “The Matrix”) and Tykwer’s “Run Lola Run” will not be pleased to learn that the reviews from Toronto were deeply mixed. If one were inclined to make bad puns — and obviously I’m not, being an incredibly high-brow, classy type — one might say they were a bunch of “Cloud Atlas” shrugs. There were very few outright dismissals, but there were just as few outright exultations. Most of the reviews of the sprawling sci-fi epic adapted from the novel by David Mitchell fell somewhere in the middle: praise for the technical achievements and for the sheer logistical accomplishment of taking stories set in six different timeline and juggling them all simultaneously for three hours; jeers for some of the tellings of those six stories, and for the generally inert drama.

For a typical, underwhelmed take on the film, see Scott Tobias’ review for The A.V. Club. Comparing it to “a Big Gulp version of Darren Aronofsky’s ‘The Fountain,'” Tobias describes “Cloud Atlas” as “a symphony of artistry and tackiness” (am I nuts, or could you describe the last “Matrix” and “Speed Racer” the exact same way?).  Though he believes there’s something inherently powerful in Mitchell’s interconnected histories, he still finds their cinematic adaptation “every bit the fiasco it seemed destined to be.” Tobias gave the film a C+ grade; his A.V. Club colleage Noel Murray was a bit more positive in his contribution to the same piece. Instead of Aronofsky, his point of comparison is Christopher Nolan; likening “Cloud Atlas” to a “two-hour-and-forty-minute version of the last half of ‘Inception,’ keeping multiple plates spinning and reaching strong crescendos by cross-cutting action sequences between timelines.” He ultimately awards the film a B, writing that he enjoyed the rhythm of “Cloud Atlas” even when he “was cringing at the melody, the words, and the performers.”

I cringed a few times reading Karina Longworth’s “Cloud Atlas” review in LA Weekly — it’s that harsh. “‘Cloud Atlas,'” she writes, “is a truly stunning misuse of talent and resources.” While acknowledging that some of her colleagues found a great deal to admire about the film, Longworth concedes she found the finished product “insipid” and “TV-esque in its limited visual imagination, and dramatically incoherent.” But Longworth also provides one of the most interesting critiques of “Cloud Atlas” to date, reading its time-skipping story, in which actors like Tom Hanks and Halle Berry play multiple parts across the ages, as a statement from transgender co-director Lana (formerly Larry) Wachowski. “Formally,” Longworth says, “it’s an experiment in the self-designed mutability of the body (up to and including male actors playing women and at least one star apparently cast as a character of a different race); thematically, it builds to a series of variations on the idea that we are all the same on the inside regardless of our born and/or lived exterior, and should all be entitled to the freedom to look and behave in the manner most true to our inner selves.” Longworth’s review might be the most negative to date, but her description of “Cloud Atlas”‘ transgendered subtext makes me want to see it more than many of the more positive reviews.

The more positive side of the spectrum is perhaps best represented by Devin Faraci from Badass Digest, who describes walking out of “Cloud Atlas”‘ three hours feeling “overwhelmed and moved and almost physically stunned.” Faraci says he recognizes some of the problems other critics found in the film — from the inconsistent makeup effects to the questionable acting choices — but ultimately doesn’t care much about them, explaining that “all of the complaints about the film will boil down to one thing that [he] can never see as a negative: ‘They tried to do too much.'” In other words, if you want to see some filmmakers put it all on the line, with ambition and sincerity, “Cloud Atlas” might be the movie for you. “The word I would use for this movie is audacious,” Faraci says. “This is the boldest sort of filmmaking, and ‘Cloud Atlas’ is a movie that throws every single thing out on screen and gives 200% effort. That can make the moments that fail feel like bodyblows, but it also makes the moments that work — and there are way more of those — transcendent.”

Transcendent or confusing. In his review for the Chicago Sun-Times, Roger Ebert admits that he hasn’t quite wrapped his head around the movie after a single viewing. “I know I’ve seen something astonishing,” Ebert writes, “and I know I’m not ready to review it.” Ebert says he can’t yet say what it all sums up to, or identify the movie’s through line. But he admires the chase and action scenes, as good as anything the Wachowskis and Tykwer have done before, and adds that “moment by moment, scene by scene, story by story” he was enthralled. At Film.com, though, Jordan Hoffman wants to make clear that his C+ grade has nothing “to do with [‘Cloud Atlas’] being confusing, or leaving any of its stories elliptical.” Hoffman says he liked the parts of the movie where he was a bit lost, and found the process of identifying all the actors and connecting their arcs “extremely rewarding.” It was the stuff after that he didn’t like, describing his response to the film’s middle hour as, “Okay, we get what you’re doing here, now what is it you want to say?” He argues that “the film makes [its multilayered narrative] seem much more heavy and secretive and important than it actually is.”

Hoffman does note that he can conceive of a future where he retracts his mixed-to-negative review as a result of future viewings. Or maybe it will take longer than that. Perhaps a hundred years in the future a primitive man in a far-flung post-apocalyptic world who kinda sorta looks like Jordan Hoffman will find the path to enlightenment by rewatching “Cloud Atlas.” Sounds like a great idea for a movie.

“While the filmmaking ambition largely outweighs the narrative, ‘Cloud Atlas’ is an achievement worth experiencing in theaters.”

“While ‘Cloud Atlas’ is competently executed, and does an excellent job at maintaining coherency despite the disparity of tone and temporality, it is, in the end, a film that will appeal to a very small niche, and does little that will be seen as especially original or daring.”

“It’s a real head-knocker, and hard to get into at first, but it settles down and inspires awe — and maybe a few awards, too.”

“On a technical level, we suppose the film is an accomplishment, with costumes and period details mostly coming through, but in most other ways, this $100 million effort offers fortune cookie social commentary put in a blender with a handful of thinly interlocking stories, in a failed attempt to say something meaningful about the human condition.”

“The opening minutes of the movie outline each of these plots; then it’s just rinse, wash, repeat for the remaining 160-odd minutes.”

“One of my two favorite films of the year so far, a movie I’ll be returning to again and again, a unique and beautiful work of film art that dares to dream big in a way we rarely see from either studios or independent sources.”

“Some movies play as throwaway paperbacks. ‘Cloud Atlas’ is Encyclopedia Britannica, volumes A through M.”