Criticwire Picks: 'How to Survive a Plague' One of the High-Scoring Docs of the Year 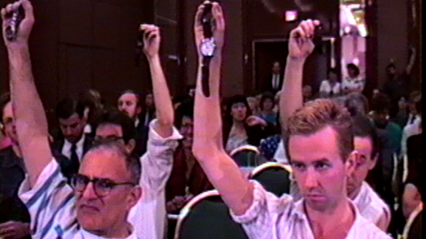 As you may have figured out by now, Sundance documentaries are no strangers to the hallowed halls of Criticwire Picks. From “The Imposter” to “5 Broken Cameras” to “Marina Abramovic,” there’s something about Park City that makes it a hotbed for nonfiction films that are both engaging and ripe for significant positive critical feedback.

This week’s entry is “How to Survive a Plague,” David France’s chronicle of the ACT UP movement that fought for greater access to AIDS treatment. From reviews out of Sundance and from subsequent outlets, the feeling seems to be that this is a movie about political action with a pure, unpreachy approach to its subjects. As Melissa Anderson points out in her Village Voice review, part of the triumph is in formal choices. “Dispensing with voiceover narration, ‘How to Survive a Plague’ is instead a compilation of first-person remembrances, a time-toggling polyphony emphasizing both individual struggles against illness and collective action—the we of me.” In his Movies.com coverage, Christopher Campbell explains that the film “can be added to the welcome crop of recent documentaries that gives me great hope for mankind and the power of protest…Whether or not you know someone living today thanks to AIDS research and drugs, you owe it to your own life and freedom to support a message like this.” If the power of documentary film is the dual ability to educate and inspire, then this is one example where craft and subject seem to be working on multiple levels.

Another festival film that (though for admittedly different reasons) is Stephen Chbosky’s cinematic adaptation of his own novel, “The Perks of Being a Wallflower.” Coming in at #10 in our end-of-TIFF poll of the best films from Toronto, it follows the story of high school freshman Charlie, who finds comfort and acceptance after befriending two older students. Those who are latching onto this tale are giving it high marks for its genuine approach to the travails of high school life. One astute observation from Kevin Jagernauth’s review at The Playlist: “What Chbosky understands is that a high school year in the life of a teenager isn’t a few big dramas but instead is made up of lots of small episodes of joy and sorrow, especially as these kids learn about the heartbreak and compromises that come with growing older and learning who you are.” The core trio of performances (Logan Lerman as Charlie, Ezra Miller and Emma Watson as his two newest compatriots) are also being singled out as a major strength, even if their storylines aren’t as polished as some might prefer. In the Indiewire capsule review from TIFF, Jason Anderson writes, “Though its episodic storyline and erratic momentum prevent Chbosky’s second directorial effort from reaching the vaunted heights of John Hughes’ high-school melodramas, it has considerable charm and no small amount of poignancy thanks to the performances.”

One 2012 TIFF outing that isn’t faring quite as well is David Ayer’s “End of Watch,” where Michael Peña and Jake Gyllenhaal star as two policemen who become embroiled in a perilous battle with a drug cartel. One main sticking point seems to be a found-footage element introduced throughout the film. Although the handheld camcorder flair, which affords the audience an opportunity to see exactly what the two main officers see on their various raids, is something rarely seen in police movies, folks like Tim Grierson argue that it doesn’t add much. “Despite the presence of Jake Gyllenhaal and Anna Kendrick, however, ‘End Of Watch’ will have a hard time distinguishing itself from a handful of other recent cop dramas available on the big or small screen,” Grierson explains. Yet, the film is not without its passionate defenders. Twitch’s Scott Weinberg gives the film credit for being an efficient look at the two men in danger. “That’s not to say ‘End of Watch’ is an over-polished piece of ‘aw, cops are people, too!’ silliness; as in all of Ayer’s films, there are areas of questionable morality and sudden violence, but here the filmmaker takes great care to present his plainly heroic policemen as decent men,” he writes.

Notable entries on this week’s slate of releases also include the Karl Urban-led readapting of “Dredd,” Jennifer Lawrence’s first foray into mainstream horror in “House at the End of the Street,” and Delphine and Muriel Couli’s pregnancy pact Cannes drama “17 Girls.”

Criticwire: Films Opening This Week
NOTE: The averages listed here are current as of the publishing of this article and are subject to change as new grades come in.

House at the End of the Street (Film Page)
Average Criticwire rating: TBD

For more information about this week’s releases and those scheduled for the weeks to come, be sure to check out the Coming Soon section.

This Article is related to: Reviews and tagged 17 Girls (17 Filles), Dredd, End of Watch, How to Survive a Plague, The Perks of Being a Wallflower