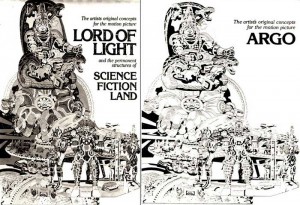 Ben Affleck’s “Argo” has been universally acclaimed as a great political thriller based on true events, but two-time Emmy-nominated director Judd Ehrlich (“Run for Your Life,” “Magic Camp”) wants more for the story behind “Argo” than a film that takes significant dramatic liberties to simplify its plot. Ehrlich wants the truth, and he’s spent the last seven years constructing a documentary to reveal just that.

While Chambers and Kirby remain in “Argo,” Kirby’s original “Lord of Light” artwork is never utilized, and Ehrlich feels the others involved in the film’s production aren’t given credit where credit is due. “Science Fiction Land” hopes to bring the work of these great men back into history books — and tell the story that “Argo” fails to complete.