The Five Greatest Segments From 'The Simpsons' 'Treehouse of Horror' Episodes 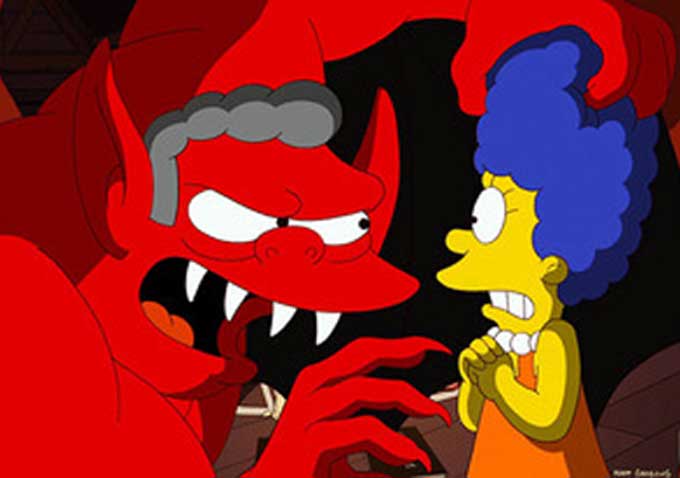 The leaves are changing colors, school’s back in session, the weather’s cooler — these can only mean one thing. Yes, finally, it’s time for “The Simpsons” to unveil a new “Treehouse of Horror” episode. While Fox’s venerable animated series is currently in its 24th season, the tradition of breaking from the normal universe of the show for a Halloween anthology episode only goes back to the second year of the Matt Groening comedy, which means the episode airing this Sunday, October 7 will be “Treehouse of Horror XXIII.” This upcoming horror-ific installment is reported to include a “Back to the Future” parody about Homer meeting Marge that offers an alternate version of Marge’s marriage involving Artie Ziff (Jon Lovitz). There will also apparently be spoofs of “Paranomal Activity” and 2012 apocalypse predictions.

In honor of the return of this “Simpsons” tradition (and our annual glimpse of Kang and Kodos), we took a look back through the “Treehouses” of yore and plucked out our five favorite segments for your perusal — if you dare. And if we’ve left out a story you feel belongs on this list, please make your case in the comments!

Taking off on “It’s a Good Life,” one of the greatest “Twilight Zone” episodes, this segment from the early “Treehouse of Horror” days takes the naturally bratty Bart and ups him to super-powered kiddie tyrant level. Everyone has to think good thoughts all the time, as in the “Twilight Zone” story, but Bart also insists on driving the schoolbus, having “The Krusty the Clown Show” run for 346 hours straight and not bothering to trick Moe into saying insulting things on his prank calls. Everyone’s terrified of defying the boy lest they be turned into something horrible — except Homer, who even in this universe just can’t let Bart do whatever he wants. As happens to a character in the source material, this leads to Bart using his mental abilites to transform his father into a jack-in-the-box. But instead of this being the terrible ending, the pair go to family therapy, spend some quality time together and bond as a family. It’s a hilarious twist on a heartwarming turn, and it’s this prospect, naturally, that has Bart waking up screaming.

“The Simpsons” is not at its strongest when it attempts topical humor, but “Citizen Kang” works so well because neither “Bill Clinton” nor “Bob Dole,” having been replaced by Kang and Kodos, behaves in any way specific to his real-world equivalent. That’s, in fact, the whole point, with the aliens attempting to overtake the country via the democratic process, as either way they’ll win. The way they act as political candidates and their surreal attempts at rhetoric are very funny — “Twirling, twirling, twirling towards freedom!” — but even better is when the ruse is discovered and works anyway, because no one wants to “throw their vote away” on an independent candidate. Everyone’s enslaved and forced to build a giant raygun to fight in an intergalactic war, but Homer gets the best line, even though he’s in chains, when he smugly declares, “Don’t blame me — I voted for Kodos.”

In the best of “The Simpsons”‘ zombie excursions, “Night of the Living Dead” parody “Dial ‘Z’ For Zombies” finds Bart discovering a book of black magic in the school library and, displaying more initiative than usual when it comes to reading, attempting to use it to resurrect the family’s dead pet Snowball I. Instead, he awakens the human undead, and soon zombies are terrorizing the town and munching on the likes of Principal Skinner, Ned Flanders and Krusty the Clown. Much of this segment feels like a ramp up to the joke where zombies attack Homer in search of brains to eat and then leave him unharmed because he can’t provide what they’re looking for — and who can fault the show, when the punchline lands so stupidly well? Homer gets another signature moment when after killing an undead Flanders he asks, “He was a zombie?” And, like our number-one choice below, the segment ends with the show knocking its own medium’s ability to induce mindlessness.

Mr. Burns is practically a vampire even in the day-to-day of the series, so his transition into a modern-day Dracula works almost too well. The florid spoof source material here, “The Lost Boys” and Coppola’s “Bram Stoker’s Dracula,” invites a good skewering, but some of the best moments in the segment are all “The Simpsons,” from Burns living in ominous… Pennsylvania to Homer’s declaring Eskimos imaginary, like elves, to Bart’s evasion of the vampires being undone by his inability to resist the “Super Happy Fun Slide” (“When am I going to be here again?”). Grandpa’s declaration that “We have to kill the boy!” before he ever learns that Bart’s become one of the undead is a classic show joke and a callback to “Dial ‘Z’ for Zombies.” And head vampire Marge’s testy declaration, “I do have a life outside of this house, you know!” is a particularly nice moment. The segment ends with the best example of the kind of non sequitur that has become common for the “Treehouses,” with the family breaking into a “Charlie Brown Christmas”-style song.

“The Shinning” skewers Stanley Kubrick’s “The Shining” so wonderfully because the writers’ affection for the film is so clear from start to finish. The segment works just as well as an homage to the horror classic as a parody of it, brilliantly diffusing the most famously frightening bits, from Mr. Burns’ deadpan musing, “That’s odd. Usually the blood gets off on the second floor,” to Homer’s comically twitchy take on Jack Nicholson’s breakdown. “No TV and no beer make Homer go crazy” is a fittingly Simpsonian answer to the film’s “All work and no play makes Jack a dull boy,” and so many other aspects of the animated universe, from Moe as the ghostly bartender (“Now waste your family and I’ll give you a beer”) to Homer only being kept from murderous insanity by TV, blend perfectly with this twist on the film. “The Simpsons” was firing on all cylinders in its sixth season, and “Treehouse of Horror V” may be the best of the Halloween episodes overall. Our only complaint — how can twins Sherri and Terri have not made an appearance as the ghostly siblings?

This Article is related to: Television and tagged Fox, Television, The Simpsons, TV Features