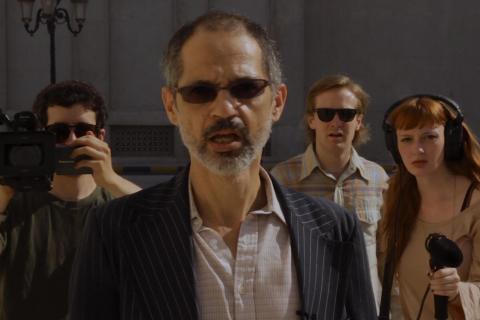 Factory 25 has acquired world rights for Caveh Zahedi’s incendiary documentary “The Sheik and I,” the Brooklyn-based indie label announced Tuesday. The film, which premiered earlier this year at SXSW, is set for theatrical release in New York on December 7, and Factory 25 will partner with Fandor to release the film via VOD, iTunes and Amazon the same day.

Zahedi, whose previous work includes “I Am a Sex Addict” and “In the Bathtub of the World,” was threatened with a fatwa as a result of “Sheikh,” which takes as its subject a Middle East Biennial, and gleefully antagonizes a host of cultural sensitivities in the course of its 104 minutes. Commissioned to produce a film on the theme of “art as a subversive act”–with the caveat that he must not lampoon the United Arab Emirates’ Sheik in the process–the director elected to do exactly that, earning the film the ire of the Sheik himself, as well as a ban for blasphemy.

“The Sheik and I”‘s December 7 premiere at Brooklyn’s Videology theater will kick off a week-long run, accompanied by screenings in Chicago, Seattle and Portland. The film is expected on DVD in the spring of 2013.

This Article is related to: News and tagged Acquisitions, Caveh Zahedi, Factory 25, The Sheik and I