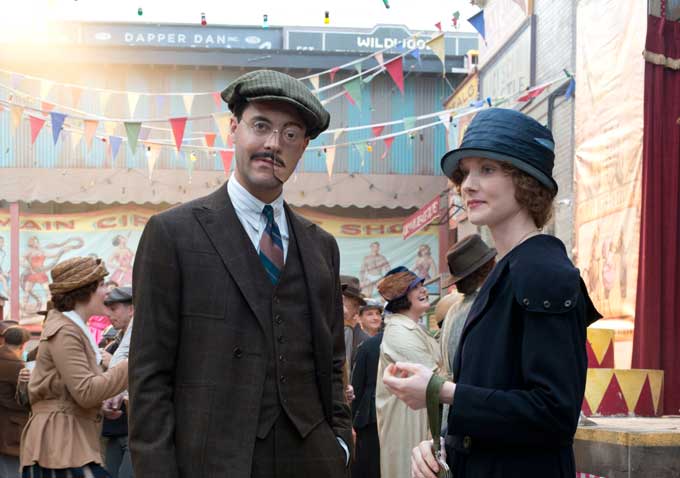 Since his first appearance halfway through season one of “Boardwalk Empire,” Jack Huston’s disfigured Richard Harrow has been a fan favorite. Whether its the way his loyalty to Jimmy Darmody (Michael Pitt) has led him to take care of the man’s son Tommy in the wake of his shocking murder at the end of the last season, or how he’s dealt with his own demons, Huston has given the WWI veteran-turned-hitman/bootlegger an unusual charm that’s instantly appealing.

Plenty of viewers thought they’d see Harrow on a bloody rampage to avenge Darmody in season three, but showrunner Terence Winter and his writers have instead shown us a more subdued Harrow. Having always longed for a connection with a woman, he begins a tentative romance with Julia Sagorsky (Wrenn Schmidt), daughter of a fellow vet Harrow met at the American Legion. What remains to be seen is how much longer he’ll be able to stay out of the mob war developing on the Atlantic City boardwalk. 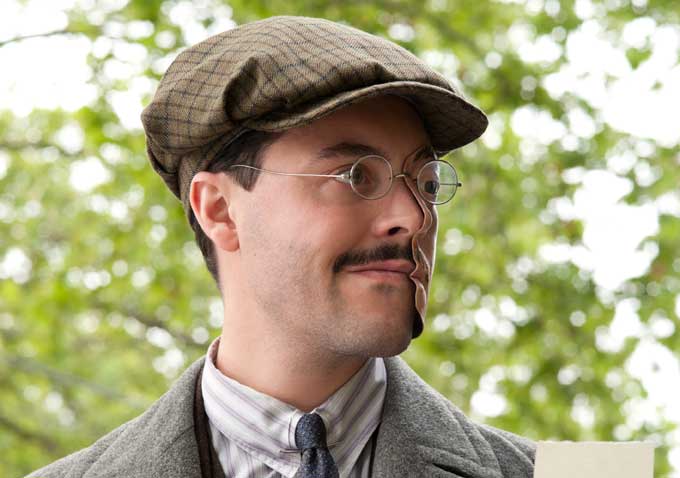 Overnight Huston, 29, has jumped from being known as the youngest player in the Huston film dynasty — nephew of Anjelica and Danny Huston (and paternal grandson of John Huston) — to heading on the fast track to stardom. Later this year you’ll see him in “The Sopranos” creator David Chase’s film directorial debut “Not Fade Away,” and he’s currently shooting the dramedy “Posthumous” opposite Brit Marling.

He’s actually back home this week after breaking his foot on set (production is currently on hiatus for 10 days until he recovers). On the mend, Huston took time out to chat with Indiewire about this season of “Boardwalk,” dealing with the emotions that come with playing Harrow and why he’s be okay with getting killed off.

So how did you break your foot?

It was just a trip. There was ice on the floor and I slipped. My foot twisted and it cracked two bones in it. But it’s healing.

And you’re done with shooting this season of “Boardwalk”? Has this given you time to catch up on watching the show?

I got finished just over a month ago. I haven’t managed to watch anything since Wrenn came in the show because I’ve been shooting in Berlin. 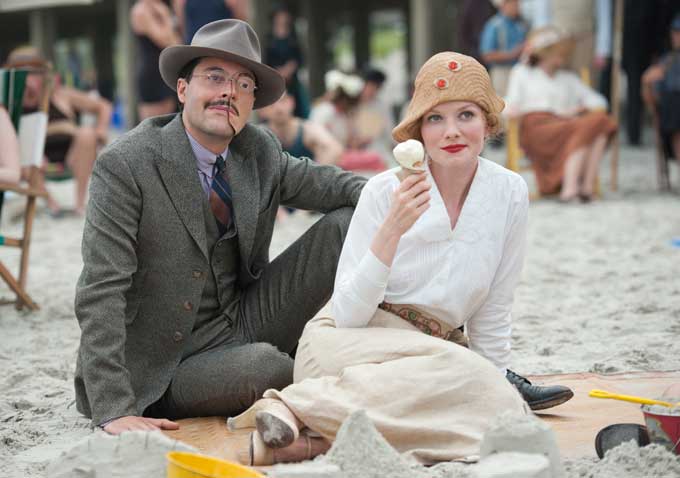 So far Richard is not in the action yet this season—

He’s kind of a sidebar story.

Are you enjoying that?

I have enjoyed it because it isn’t something that we’ve done on the show. It’s nice to take it in a different direction. Especially introducing Julia, the love interest, and my relationship with Tommy and Gillian (Gretchen Mol) and how that’s progressed. I’ve enjoyed exploring this other side to Richard. It’s something that I think a lot of people who watch the show wanted to see happen.

There’s that gorgeous scene of you, Tommy and Julia taking a portrait together in the October 28th episode “Sunday Best.”

Yeah. I remember doing that. That was very much a conscious thing. We thought it would be great if Richard just stared at her and you see the half of his face that isn’t damaged. It’s almost like a full person and an actual family. It was a nice choice.

I really felt that episode encompassed Richard. He’s been trying to fill this female void since his sister.

Absolutely. He went through it with [Darmody’s wife] Angela as well. She was a stepping stone because she was a platonic love, someone who he idolized. She is the first woman really to be sweet and tender to him and treat him as a human being instead of this Frankenstein-esque monster. It really helped him with Julia because I don’t think he would have ever found someone who would love him back. Once he did meet Julia he didn’t shy away from it the way he might have normally. He opened himself up to the possibility.

By season’s end will we see Richard in more of the action?

Um, I think people will be pleasantly surprised. That’s the most I can say. Purely because the writers know how the serve it up, they know how to end the season by tying everything together. I think it’s tied up very beautifully and I was very happy.

How far ahead are you allowed to see in the season? Do you get multiple episodes worth of material?

Oh, no. Episode by episode and even with that we only see just so much. It’s very Woody Allen-like. I don’t know what’s going on with a lot of people on the show. When I’m watching it I’m watching it mostly for the first time. By the end we weren’t doing table reads because we were doing two units and trying to shoot two episodes at the same time, so for a lot of us we won’t know what’s going on until we watch it. It’s fun, actually. 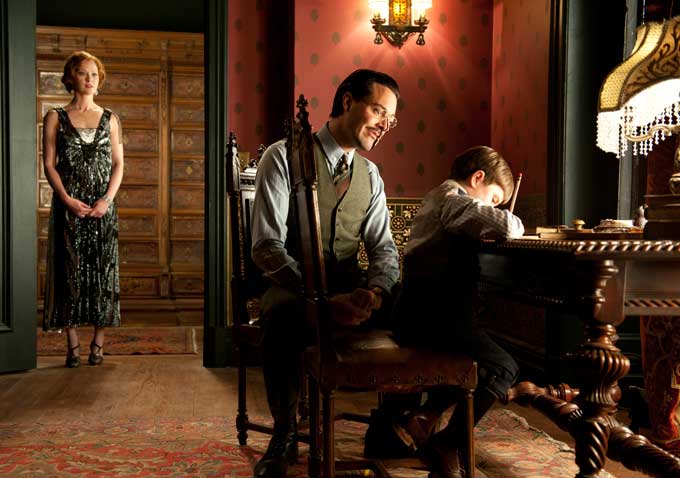 What are the challenges of that as an actor?

I tell people it’s like life. You only get to think about the here and now, and that’s nice. We also don’t preempt something that hasn’t happened yet, which sometimes actors tend to do. If you were on episode three but you know what happens on episode seven maybe you’d be leaning to play the scene a certain way, but the way this is you just play the way it’s written. So I think it gives us a bit more truth, more honesty.

The preparation for Richard, has that changed for you since season one?

It’s funny, Richard is so within me now that it’s a quick preparation. I pop some gauze in my mouth and I put on the mask and I instantly transform. I walk around the set clucking and kicking and making strange movements, so it’s strange for those who don’t know me, but apart from that it’s so easy to completely immerse myself and lose myself in the character when I’m on set. It’s unlike anything I’ve ever done and will probably never do anything like it again.

Are there traits of Richard that are hard to kick when you’re done with a season?

Emotionally you get quite attached. When you have a tough day on set, or you’re doing something that’s emotionally draining and you take that home, you go through moods for a bit. Not in a bad way, you just can’t help but be affected by it.

My girlfriend tells me if I’m doing a movie I’m a roller coaster of emotions all the time, but on “Boardwalk,” because I’ve done it for so long and I’m so in tune with the character, she says I’m pretty happy most of the time. For a movie she’s like, “Oh, God, I’m dealing with a maniac!” Wth the show it’s like a normal job.

It’s a normal job where at any moment your character could be killed.

Yeah. That can be rough. I’ve said you can die at any moment on this show. But I think that’s the best thing about it. Your comfort level, you can never get completely settled in it. And by the way, if they killed me I would respect it and love it just as much.

They make difficult decisions for the good of the entire show rather than thinking individually, which is the best way you can write something or be a part of something like this. So if I get killed, I get killed. That’s the way the cookie crumbles and I’ve loved every minute doing it. 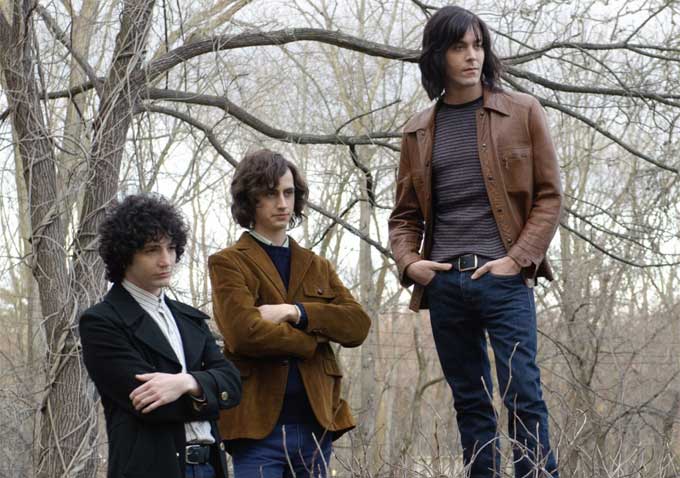 You have David Chase’s “Not Fade Away” coming up, can you compare and contrast the styles of Chase and Terence Winter?

They are completely different but you can see why they work so well together. With Terence, he’s my producer and David was my director so it’s tough to say because with David we were working together every day from ground up. But as Terry will say, David was his mentor and someone who he will forever look up to, so to be able to work with both of these men has been amazing.