Out This Week: 8 Reviews Of New Releases, From 'Addicted to Fame' to 'Universal Soldier' 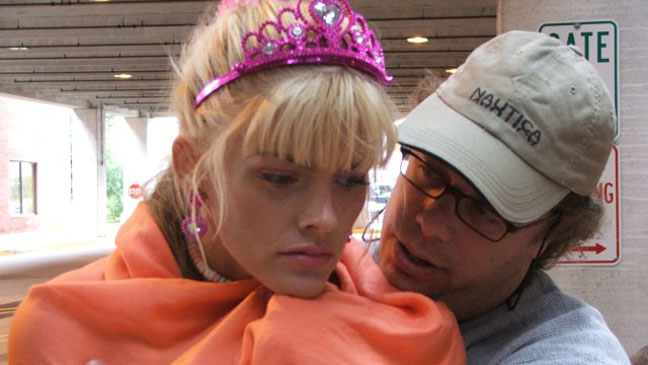 This weekly column is intended to provide reviews of nearly every new indie release (and in certain cases studio films), including some VOD titles. Specific release dates and locations follow each review.

It was probably cathartic for B-movie director David Giancola to make “Addicted to Fame,” his nimble chronicle of the perfect shit storm that was the making and marketing of “Illegal Aliens,” his 2007 B-movie starring and co-produced by the late Anna Nicole Smith. Using this documentary as a form of confessional, the director is obviously hoping to engender sympathy and clear the record about the troubles he had working with the tragic Smith, who forgot lines, showed up late on set, cancelled appearances and forced the director to edit around her. Cynics may assume Giancola is timing his canny piece of self-promotion to wring more publicity out about his B-movie that never got its proper chance. But “Addicted to Fame” really shows how Giancola was intoxicated by all the hype “Illegal Aliens” received, and how he faced—and handled—ethical quandaries at every media opportunity. While one-sided, this credible documentary serves more as a cautionary tale on hubris in filmmaking than as an investigation into the cult of celebrity. More than anything else, “Addicted to Fame” illustrates that Giancola still can assemble a film competently, if not artfully. Criticwire grade: B [Gary M. Kramer]

Opens Friday in select theaters; also available on VOD and iTunes. Released by Abramorama. Watch the trailer below:

Feng Xiaogang, one of China’s most successful directors, presents this account of the early-1940s famine in which 3 million people starved to death in Henan province during the Sino-Japanese war. The movie mixes intimate scenes of refugees fleeing their homes, some forced to sell wives and young daughters in return for food, and well-done depictions of Japanese planes bombarding innocent villagers. In an effort to attract Western audiences for this $35 million production, the cast includes Adrien Brody and Tim Robbins. Brody is real-life Time magazine photographer Theodore White, who brought the famine, corruption and apathy to the attention of the West. In an unnecessary part, Robbins plays a Catholic priest. Neither is likely to draw Westerners to this overlong (146 minutes) production. “Back to 1942” should attract audiences at home but will leave outsiders shrugging their shoulders. Criticwire grade: B [V.A. Musetto]

The aging rock star past his prime is an archetype that moviegoers know too well. The one-sheet for Marshall Lewy’s “California Solo,” which features Robert Carlyle as jaded former Britpop musician Lachlan holding his guitar case and gazing wistfully at an open road, reeks of familiarity. The plot does, too: Wasting his days away in the sun-soaked countryside on the outskirts of Los Angeles, Lachlan shakes up his dark past when a DUI leads to the threat of deportation. Forced to prove to a judge that leaving the country would cause “extreme hardship” to a U.S. citizen, Lachlan fights to make amends with his estranged ex-wife and daughter. The usual gruff domestic arguments ensue, as Lachlan grows increasingly frantic about his situation and struggles to make his relatives believe he’s being sincere. Fortunately, Carlyle’s gently subdued performance doesn’t overplay the drama and writer-director Lewy (“Blue State”) avoids overstating the melodrama, so that even as “California Solo” plays like a track we’ve heard before, it’s still worth a listen. Criticwire grade: B [Eric Kohn]

Opens Friday in New York. Released by Strand Releasing. Watch the trailer below:

It’s no surprise that “The Collection,” a movie written and directed by the same guys who made “Saw” entries IV through VII (otherwise known as “Saw 3D”) foregrounds a ridiculous amount of gore in this standalone slasher flick, in which a psychopath keeps his victims trapped in an abandoned hotel littered with death traps. What’s surprising is that the oodles of bloodshed engender fatigue more than shock. The filmmakers can’t top an early party scene that finds the mad man wrecking havoc with a giant lawnmower apparatus coming down from the ceiling of a club and chopping up the dance floor. From there, “The Collection” struggles to make us care about the stakes of a few lives even though we’ve already witnessed a mass execution. At the end of that startling sequence, the demented masked man kidnaps Elena (Emma Fitzpatrick) and takes her back to his lair, not realizing that he’s nabbed the daughter of a rich man willing to hire a team of mercenaries to get her back. Led by the hardened Arkin (Josh Stewart), a former captive of the lunatic who recently escaped, the men make their way through this twisted hall of mirrors while the body count steadily rises. The whole thing is a fairly yawn-a-rific affair until the vengeful prologue establishes a wicked role reversal, hinting at the better movie that filmmakers more interested in storytelling would have made. Criticwire grade: C- [Eric Kohn]

As usual for director Andrew Dominik (“The Assassination of Jesse James By the Coward Robert Ford”), there are no good guys in “Killing Them Softly,” only people caught on two sides of a rough deal. The director’s gritty, violent and heavily stylized adaptation of George V. Higgins’ 1974 crime novel updates the story to recession-era 2008 and overstates it to the extreme, but Dominik brings a sleek pulp sensibility to the material and melds its topicality to a strange form of scathingly anti-capitalist entertainment.

Jackie Cogan (Pitt, a similarly hardened baddie to Jesse James, but more solitary) is a merciless hitman assigned to knock off various players involved in robbing a Boston poker game filled with mobsters. But the movie takes its time getting there, spending its first act entirely in the frantic realm of the bottom-feeders involved in the initial theft: Frankie (Scoot McNairy, “Monsters”), a weak-kneed small-time crook hired by scheming thug Johnny (Vincent Curatola) alongside clueless junkie Russell (Ben Mendelsohn) to pull off a seemingly foolproof robbery that strategically positions another mobster, Markie (Ray Liotta), as the fall guy. The gig goes off without a hitch until Cogan enters the scene, hired by an unnamed mob representative (Richard Jenkins) to take care of everyone involved… so he does. The movie isn’t political so much as philosophical, trashing the notion of the American dream as anything more than fodder for an endless rat race. Criticwire grade: B+ [Eric Kohn]

Read the full review here. Opens Friday in several cities. Released by The Weinstein Company. Watch the trailer below:

The found-footage approach to cinematic narrative is no longer epitomized by “The Blair Witch Project.” Amateur-quality camerawork has become a part of the vernacular, with the first-person perspective providing an intimate window into human behavior, particularly among the youth culture most capable of using the device to record itself. Shot exclusively on iPhones, “King Kelly” turns that tendency into an American horror show, delivering a ferocious indictment of Generation Me by boiling it down to a single ditzy teen.

From the uneasy opening moments, “King Kelly” foregrounds its conceit. Unbeknownst to her clueless parents in the next room, nubile blond Kelly (Louisa Krause) runs an online sex show in the bedroom of her suburban home. The first shot shows Kelly indulging in graphic masturbation performance for her paying admirers, whose online tips rapidly embolden her outsized self-confidence. Later, she’s seen traipsing around her room in star-spangled underpants, rehearsing another bit for her encouraging pal Jordan (Libby Woodbridge). Together, they represent ugly American stereotypes in physical terms. It’s an unflinching update to media scholar Neil Postman’s prophetic claim about the deadly impact of television on cultural identity: Smartphones in hand, we face the danger of filming ourselves to death. Criticwire grade: A- [Eric Kohn]

Of little relation to “Silent Night, Deadly Night,” Steven C. Miller’s “Silent Night” is an overall misfire that lacks even the loosest of genre film logic and is laden with boring kills and ill-conceived special effects. Our Final Girl here is Deputy Aubrey Bradimore (Jamie King) who, with crusty Sheriff Cooper (Malcolm McDowell), gear up for their sleepy town’s annual Santa Parade. However, they end up hunting down a serial killer who violently picks off his victims whilst dressed like Santa. One is made to believe that the killer — dubbed “Mr. Snow” — a serial killer, in that he targets only those who are naughty, but that flimsy logic is abandoned fairly early on and he just kills whomever he pleases. This film does try to pander to genre fans with the frequent booby shots, but these are low blows that add little titillation. While there is a high body count, the kills quickly become repetitive and show the obvious marks of a low budget. The action scenes are also jerky and poorly shot, and while King is a winning leading lady, the film fails to measure up to even the campiest of its horror contemporaries. Criticwire grade: D [Caitlin Hughes]

Opens Friday in New York and Los Angeles. Available on Blu-ray/DVD December 4. Released by Anchor Bay. Watch the trailer below:

With few exceptions, franchises aren’t known for increasing their quality as they move along. The “Universal Soldier” series, which began with Roland Emmerich’s 1992 blockbuster that starred Jean-Claude Van Damme and Dolph Lundgren, stands out from the norm. Rather than riffing on the same appeal each time out, as the current spate of “Fast and Furious” sequels have done with continuing success, director John Hyams has dismantled a spate of direct-to-video “Universal Soldier” sequels as well as an ill-received theatrical follow-up by reinventing the entire attitude of the series. Upping his ambition after the decent reception for 2009’s “Universal Soldier: Regeneration,” with “Universal Soldier: Day of Reckoning,” Hyams delivers a remarkably satisfying action-thriller hybrid that constantly pushes ahead. It’s one of the best action movies of the year simply because it keeps hitting the right beats. Criticwire grade: A- [Eric Kohn]

This Article is related to: Reviews and tagged Back to 1942, California Solo, Killing Them Softly, King Kelly, Out This Week, Reviews, Silent Night, The Collection, Universal Soldier: Day of Reckoning