'The Comedy' Director Calls Out Critics For "Insulting and Irresponsible" Reviews 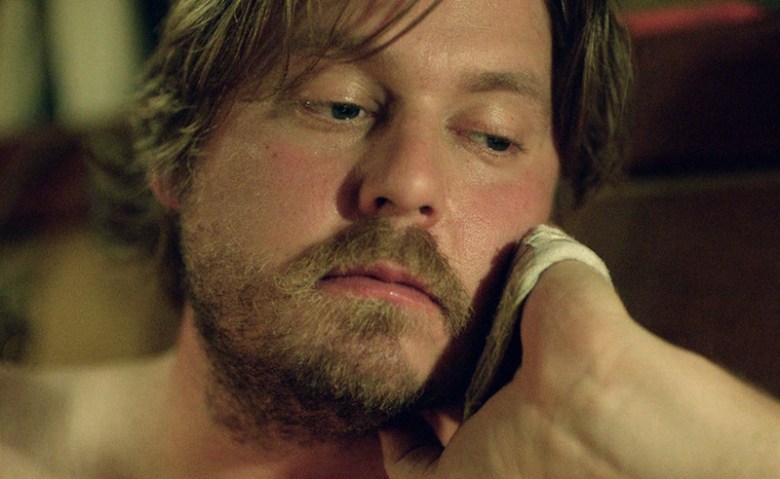 In one of the most troubling scenes in “The Comedy,” our “hero,” a cruel, sarcastic hipster named Swanson (Tim Heidecker), watches as someone suffers from a seizure. Swanson’s life is defined by inactivity; he’s about to inherit his ill father’s wealth and doesn’t need to work for a living, so mostly he wanders around Brooklyn, drinking, hanging out with his buddies, and making strange and sometimes racist jokes.

This particular scene is his stasis’ most disturbing expression. Without spoiling too many of its details, the publicity photo above is from the sequence in question; that right there is the look on Swanson’s face as someone convulses in front of him. The film abruptly cuts away so that we never see exactly how the crisis resolves. We don’t learn whether Swanson stepped in or not, or his precise motivations for his failure to act. All we see is the man as he sits, silently and passively staring.

Silent passivity is apparently not a trait shared by Swanson’s creator, Rick Alverson, who is the co-writer and director of “The Comedy.” Yesterday, Alverson took to Twitter and unleashed a lengthy, multitweet rant about critics’ reactions to his movie, which currently has a 53% on Rotten Tomatoes and a B average on Criticwire. Though Alverson didn’t mention him by name, he was primarily directing his comments at A.O. Scott for his review of “The Comedy” in The New York Times. Scott certainly wasn’t a fan of the film, writing, in part:

“‘The Comedy’ is a case study in hipster obnoxiousness that takes no critical distance from its subject. Swanson’s vocation is trying to see what he can get away with, and of course he gets away with everything. His racist, homophobic and misogynist rants are delivered not with any evident irony, but rather proceed from the sense that he is entitled never to be taken seriously. The question is whether the movie extends itself the same license. But Mr. Alverson, as a director, is nearly as affectless and passive-aggressive as Swanson.”

After retweeting two different followers who called Scott “blind” and dismissed his “worthless” thoughts, Alverson himself tweeted the following comments:

“That a critic for a respected newspaper demand a director insert condemnations of immoral or aberrant behavior into a film is frightening, particularly when that behavior is not padded with comfort or made palatable. Ambiguity is necessary for access to that behavior. To question a filmmaker’s moral compass because he/she won’t submit to banal, cinematic moral grandstanding is insulting and irresponsible. It reduces the potential of cinema to a narrow, sanitized, puritanical and unreal world without potency… little more than a narcotic. The filmmaker should cultivate ambiguity and neutrality, If only to counter the destructive, inane status quo of certitude in popular movies. To simply validate the moral high ground of the audience is destructive and demeaning to both their potential experience and to the material. The universe is not moral. Morality is a creation of societies. For a filmmaker to actively cast judgement on his/her characters is a lazy, convenient, arrogant and reckless pursuit. Filmic narrative should not wholly resemble literary or theatrical narrative. It is more temporal and should work though accruement.”

For a filmmaker asserting his right to ambiguity, Alverson’s reaction is awfully unambiguous. I hadn’t read Scott’s review when I first saw Alverson’s angry response, so I must admit I was surprised when I circled back to the original piece and found its tone relatively measured; this is by no means A.O. Scott’s harshest review of the year, or even the last few months (by email, Scott told me he had no comment about Alverson’s tweets).

I’m not interested in getting in the middle of someone else’s Twitter fight, so all I’ll say is this: Alverson’s worldview about morality is very clearly reflected in his film. If you find yourself nodding along as you read his statement, then you should probably watch “The Comedy.” If you disagree with him, then maybe a movie with more “critical distance” — or “moral judgment” or whatever you want to call it — might be in order. Since I just watched it last night, I’ll recommend “Compliance”  — another film about passivity in an immoral universe that is also anything but a narcotic — as an alternate viewing suggestion.

This Article is related to: News and tagged A.O. Scott, The Comedy