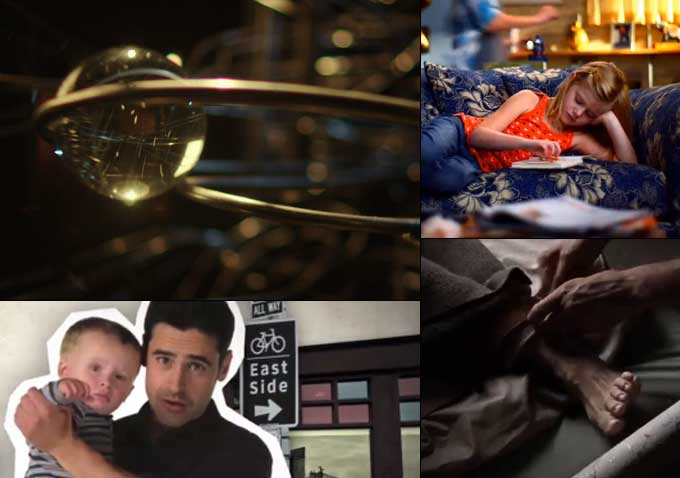 A quick survey of this fall’s (and the past summer’s) new shows suggests that whatever other trends you may spot — apocalyptic settings, single leading ladies, atypical families — TV definitely seems to be moving away from the traditional opening credits sequence to a more straightforward title card. While cable channels still lean toward longer openings, with HBO generally leading the pack (the back-patting opening for “The Newsroom” aside), the networks seem to be favoring either briefer title displays that don’t eat quite so much into episode runtimes, or “Revolution”-style expository intros that explain high-concept premises. In appreciation of well-edited montages and catchy theme songs, no matter how tired they can get when binge watching a full season of a show on Netflix, here’s a look at the five best opening credit sequences from the narrowing selection of 2012’s new series.

“Ben and Kate”
Fox’s comedy about an irresponsible dreamer of an older brother (Nat Faxon) moving in with his younger, more serious single mother sister (Dakota Johnson) condenses the history of its sibling main characters into a charming montage that takes them from childhood into teenagerdom and through to the present day, showing off their dynamic in the process.

“American Horror Story: Asylum”
Okay, “American Horror Story” is a returning show, but technically, since the FX horror drama is taking a long-form anthology format with different characters and settings, it’s a new iteration of a miniseries rather than a second season. Either way, the 2012 opening credits — created by the motion graphics house Prologue, with that clicky-creepy theme song by sound designer Cesar Davila-Irizarry and musician Charlie Clouser — are powerfully atmospheric, filled with dark hospital imagery and dreamlike composition.

“Guys With Kids”
NBC’s sitcom about a group of thirtysomething fathers (Anthony Anderson, Zach Cregger and Jesse Bradford) earns its place on the list with a catchier-than-usual theme song, “Why Would You Walk When You Can Run” — one that’s actually sung by series co-creator Jimmy Fallon.

“Dallas”
In keeping with the whole “the soap operatics never stopped” approach of TNT’s sequel to the long-running Texas-set primetime drama, the new series’ opening brings back the classic theme music and format of the original while showcasing a Dallas (and editing and split screen techniques) that have grown and changed over time, providing a nice throughline to the 1978–1991 series.

“Elementary”
With more work from Prologue, the beautiful Rube Goldberg-esque title sequence for CBS’s Sherlock Holmes modernization (starring Jonny Lee Miller and Lucy Liu) blends together crime scene imagery — revolvers, cages, spilled red liquid — with a contraption powered by a marble that neatly signals the logic-fueled, connective power of the mind of the show’s protagonist better, perhaps, that the actual cases he solves have.