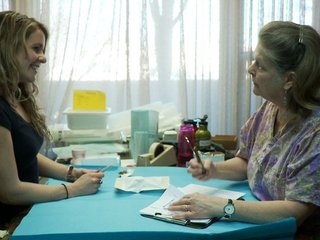 Chicken & Egg Pictures, the film foundation for women filmmakers has announced the grant recipients for its current cycle, with $220,000 going to twenty-five documentary projects. Three of the films, “After Tiller,” “The Square” and “Valentine Road,” will join former Chicken & Egg grant recipients “Citizen Koch” and “Gideon’s Army” at the 2013 Sundance Film Festival next month.

A complete list of grant recipients with descriptions provided by Chicken & Egg Pictures is below:

AFTER TILLER, Directors Martha Shane and Lana Wilson*
(Completion, Liberty Grant)
Since the assassination of Dr. George Tiller in 2009, there are only four doctors left in America providing late-term abortions. With unprecedented access, After Tiller goes inside the lives of these physicians working at the center of the storm.

AMERICAN REVOLUTIONARY: THE EVOLUTION OF GRACE LEE BOGGS, by Grace Lee*
(Post Production, I Believe In You Grant)
Grace Lee Boggs is a Chinese American activist and philosopher in Detroit dedicated to social change and building a more just future for all of humanity. At age 97, her vision of the next American revolution may surprise you.

THE BILL, Director Ramona Diaz
(Production, I Believe In You Grant)
A political firestorm hits the Philippines when a proposed reproductive health law pits tradition against reform, bringing the culture war into the streets and churches. The stage is set for a showdown between timeless antagonists: those who resist and those who embrace change. While the bill’s defeat or passage holds profound implications for this Catholic country, the twelfth most populous in the world, the spectacle also illuminates the universal drama inherent in change.

BLACKOUT, Director Eva Weber*
(Completion, Liberty Grant)
Every day during exam season as the sun sets over Conakry, Guinea, hundreds of school children begin a nightly pilgrimage to the airport, petrol stations, and wealthy parts of the city, searching for light to study under. This evocative documentary tells the story of these children’s inspiring struggle for education in the face of the country’s own fight for change.

CAN’T STOP THE WATER, Directors Rebecca Ferris and Jason Ferris*
(Post Production, I Believe In You Grant)
Can’t Stop The Water tells the story of a tiny island deep in the bayous of south Louisiana called Isle de Jean Charles, and its Native American Cajun residents. Overwhelmed by a host of environmental problems, including coastal erosion, sea level rise from global warming, and oil company and government canals, the community fights to save their culture as their land washes away.

CHESHIRE, OHIO, Director Eve Morgenstern*
(Post Production, I Believe In You Grant)
A gun toting 83-year old woman refuses to sell her house to the power plant next door, but the plant has moved ahead with their 20 million dollar deal to buy out most of small town Cheshire, Ohio and bulldoze all the homes. What happened in this Ohio River town overrun by one of the largest coal-fired power plants in the world?

HOW TO BECOME AN EXTREME ACTION HERO, Director Catherine Gund
(Production, I Believe in You Grant)
How To Become An Extreme Action Hero is a about the life and art of Elizabeth Streb, a movement architect, self-taught physicist, spatial philosopher, and extreme action hero. The film takes the viewer along for a ride through Streb’s personal story – from scrappy youngster to a movement visionary known as the Evel Knievel of dance. This film is a documentary experience as invigorating and surprising as the woman herself.

LOVE TRUE, Director Alma Har’el
(Development, Hybrid, I Believe In You Grant)
How do we make decisions about our love life? The result is an exploration of love through re-enactments of our past memories and of our inner dialogues about our future.

THE NEW BLACK, Director Yoruba Richen*
(Post Production, I Believe In You Grant)
The New Black uncovers the complicated and often combative histories of the African-American and LGBT civil-rights movements. Specifically, the film examines homophobia in the black community’s institutional pillar–the black church, and reveals the Christian right wing’s strategy of exploiting this phenomenon in order to pursue an anti-gay political agenda.

NIGHT PASSAGES, Director Lourdes Portillo
(Development, Celebration Grant)
In the face of serious illness there is also the opportunity for happiness and reflection. Responding to the filmmaker’s cervical cancer diagnosis, Night Crossings is a personal journey through the subconscious via chemotherapy and radiation influenced dreams, ultimately examining what defines our experience of being human.

NO MÁS HIJOS POR VIDA (NO MORE BABIES FOR LIFE), Director Renee Tajima-Peña
(Post Production, I Believe In You Grant)
Más Hijos Por Vida uncovers the contested history of sterilizations of Mexican American women during the 1960s and 70s at Los Angeles County Hospital, and how a group of mothers, young lawyers and activists, and a whistle-blowing doctor stood up in the name of justice.

PEACEKEEPERS, Directors Geeta Gandbhir, Sharmeen Obaid-Chinoy, and Perri Peltz
(Development, I Believe In You Grant)
Following an all female unit of UN peacekeepers from India to Liberia, Peacekeepers aims to raise awareness about the role of women in UN peacekeeping missions, as well as the unique contribution they make in crisis situations, from inspiring trust among female victims to acting as positive role models in communities facing instability.

PRIVATE VIOLENCE, Director Cynthia Hill
(Post Production, I Believe In You Grant)
Private Violence follows four women experiencing domestic abuse, and the advocates and activists that support them, portraying the complicated pathway from victim to survivor.

SHE’S BEAUTIFUL WHEN SHE’S ANGRY, Director Mary Dore
(Post Production, I Believe In You Grant)
She’s Beautiful When She’s Angry tells the dramatic story of the young activists who founded the women’s liberation movement. Brimming with personal stories, dramatic re-enactments and humor, the film shows the birth of a tempestuous, far-reaching movement in the late 1960’s. Outrageous, angry, and brave–they risked everything to bring about a revolution for women.

THE SQUARE, Director Jehane Noujaim
(Completion, Liberty Grant)
Telling the immersive story of the ongoing struggle of the Egyptian Revolution, The Square begins in the tents of Tahrir leading up to the fall of Mubarak, and follows its young revolutionaries on their life-changing journey through the euphoria of victory, into the uncertainties and dangers of the current ‘transitional period’ under military rule. When the protection of international news cameras leaves the square, everything they’ve fought for is now under threat.

(T)ERROR, Directors Lyric R. Cabral and David Felix Sutcliffe
(Production, I Believe In You Grant)
(T)ERROR is an intimate exploration of the domestic war on terror, featuring unprecedented real-time access to central players entangled in an active counter-terrorism investigation. The film will attempt to demystify the nature of America’s terrorist threat, and will bring audiences face-to-face with issues of domestic surveillance, racial profiling, entrapment, freedom of speech, and the freedom of religious expression.

THEY ARE ALL MY BROTHERS, Director Nicole Opper*
(Post Production, I Believe In You Grant)
Four boys from abusive households seek new beginnings at IPODERAC, an unconventional group home in rural Mexico. Together, they redefine family.

WHAT TOMORROW BRINGS, Director Beth Murphy
(Production, I Believe In You Grant)
In the remote, conservative Afghan village of Deh Subz, the very first girl’s school opens across the street from an all boys madrassa, challenging centuries-old social traditions against the backdrop of the U.S. withdrawal from the war on terror.

WITHIN EVERY WOMAN, Director Tiffany Hsiung
(Post Production, I Believe In You Grant)
Within Every Woman is a film that explores the forgotten history of the ‘comfort women’, a term used to describe over 200,000 girls, some as young as nine years old, who were forced into sexual slavery during World War II in Asia.

THE WRECKAGE, Directors Mary Posatko and Emily Topper
(Completion, Liberty Grant)
Set in Baltimore over three generations of the filmmaker’s family, The Wreckage is a frank examination of her grandfather’s murder during the volatile1960s, and the effect it had on his surviving wife and children. The film reveals an America that is still far from post-racial. An honest reckoning with the truth suggests a new way forward.

YOUNG LAKOTA, Director Marion Lipschutz
(Completion, Liberty Grant)
On the Pine Ridge Reservation in South Dakota, Sunny Clifford, her twin Serena, and their neighbor, Brandon Ferguson, share an inchoate dream of changing the harsh world around them. Their opportunity comes when a tribal election hinging on abortion politics and women’s rights sets off a chain reaction in the lives these three young Lakota, forcing each to make choices that define who they are, and the adults they will become.

UNSTABLE ELEMENTS, Director Madeleine Sackler*
(Completion, Liberty Grant)
Forced into hiding and torn apart from their loved ones, the members of the Belarus Free Theater face increasing danger to continue creating illicit performances. In their underground art, they turn a spotlight on their own lives to expose the truth about life under the last dictatorship in Europe.

This Article is related to: News and tagged Chicken & Egg Pictures, Documentary