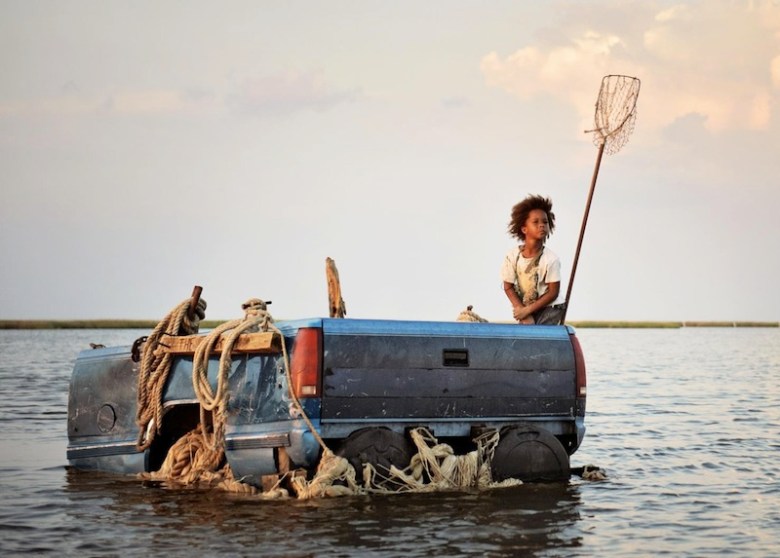 This week on DVD/Blu-ray: The biggest hit at this year’s Sundance Film Festival; the foud-footage horror film to put your faith back in the genre; Yorgos Lanthismos’ follow-up to “Dogtooth”; one of the best thrillers to come out of France in the past decade; and a comedy sure to turn you off of butter for good.

“Beast of the Southern Wild,” arguably the most talked about indie of the year (it won two awards at Sundance including the Grand Jury Prize and the coveted FIPRESCI award at Cannes in the Un Certain Regard section — these among many other accolades), arrives on DVD and Blu-ray today just as the fall awards season gets underway with its pint sized star Quvenzhané Wallis at the top of the acting heap. The astonishing discovery (who was only five-years old at the time of filming) stars as Hushpuppy, a young girl living with her father (breakout Dwight Henry) in a remote rural community surrounded by water in Southern Louisiana, known as the ‘Bathtub.’ When a massive storm hits her area, Hushpuppy is forced on a journey that will change her life forever.

Extras: “The Making of Beasts of the Southern Wild”; the film’s theatrical trailer; a sneak peek at other movie trailers; deleted scenes with commentary by director Benh Zeitlin; auditions; and a number of featurettes.

No one would have guessed that, more than a decade after “The Blair Witch Project” broke box-office records to become one the highest grossing independent films of all time, audiences would still flock to found-footage flicks. From the ongoing success of the “Paranormal Activity” movies to the recent strong opening of “The Devil Inside” that caught many by susprise, one thing’s for sure — the style is here to stay. “V/H/S,” a 2012 Sundance Midnight Madness selection that earned rave reviews upon its premiere, is one more in that vein. The buzzed-about film is a collective horror effort featuring segments directed by Radio Silence, Adam Wingard, Glenn McQuaid, David Bruckner, Joe Swanberg and Ti West, much like the upcoming “The ABCs of Death.” To string all the parts together, “V/H/S” centers on a group of petty criminals hired to retrieve a rare piece of footage from a house filled with strange VHS tapes, which they must scan through individually.

Burgeoning Greek auteur Yorgos Lanthimos, the filmmaker behind the Academy Award nominated stunner “Dogtooth,” is back with the equally oddball ensemble drama, “Alps.” His latest finds him re-teaming with “Dogooth” co-writer Efthymis Filippou for a tale that concerns a nurse, a paramedic, a gymnast and a coach who have formed a service for hire: They stand in for dead people by appointment at the behest of relatives, friends or colleagues of the deceased. Everyone operates under a discipline regime demanded by their leader, the paramedic, except for the nurse who threatens his rule.

READ MORE: ‘Alps’ Director Yorgos Lanthimos on Following Up ‘Dogtooth,’ His Move to England and What He Finds Boring

Extras: The film’s theatrical teaser and the full-length trailer.

Guillaume Canet’s wildly entertaining 2008 thriller “Tell No One” (the top grossing foreign language film that year) lands on Blu-ray for the first time today, following the summer release of Canet’s latest, the sprawling ensemble dramedy “Little White Lies.” Winner of a whopping four Cesar awards including Best Actor and Best Director, “Tell No One” stars “The Intouchables” star Francois Cluzet as a man who finds himself implicated in a double homicide, eight years after his own wife was murdered. Based on Harlan Coben’s international bestseller, “Tell No One” keeps the twists coming at a breakneck pace, and manages to deliver an extremely satisfying payoff that delivers an emotional whallop.

Jennifer Garner heads an impressive cast that includes Ty Burrell, Olivia Wilde, Hugh Jackman, Rob Corddry and Alicia Silverstone in “Butter,” the Weinstein Company’s Tea Party-lampooning comedy. Although nowhere near as smart at mocking small town types as “To Die For” (the most obvious predecessor), “Butter” still makes for an entertaining and hilarious romp thanks to a game ensemble and wacky premise. Garner plays Laura Pickler, the wife of a former butter-sculpting champion who takes a stab at mastering the craft with aspirations of a career in politics. Her chances at taking over her husband’s title are threatened when a young black girl, Destiny (Yara Shahidi), comes to town armed with a winning smile and major butter-carving talent. Garner is great as a conservative housewife with a close relationship to God — and an even closer one to butter — but it’s Wilde who dominates the comedy as a stripper hellbent on making Laura’s life a living hell.

This Article is related to: Features and tagged Alps, Beasts of the Southern Wild, Butter, Small Screens, Tell No One, V/H/S